Welcome to my Farming Guide, a thread dedicated for folks who still farm items in BL2. Here I'll cover various maps with location of loot chest and other points of interest. This guide will also include farming strategies, which can enchance (and shorten) this procedure. Hope you enjoy it!

The Fridge is one of the most ignored areas, due to tough enemies, such as Rats, Crystalisks or Stalkers, and not-so useful (if not useless) drops. That's a real pity - with 4 red chests and the option to check all of them with 1 run, this map has it potential other locations can only dream of. 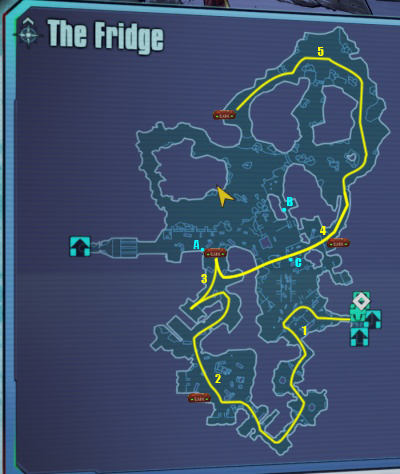 POINTS OF INTEREST
1. The 1st point of interest is located near the beginning of the area. Laney White, which spawns there after completing 'The Cold Shoulder' quest from Scooter, has a chance to drop legendary Bandit pistol Gub.

2. The Crystal Claw Pit is the home of Smash Head, enormous, rocket launcher wielding Golaith, who can be farmed for legendary Bandit shotgun Slegde's Shotgun after turning in the 'Note for Self Person' quest from The Fridge itself. Smash Head spawns after opening the red chest located there.

3. Next is the Rakk Cave, where player can fight Rakkman in order to get the legendary Tediore pistol Gunerang to drop. Another red chest is located at the legde of the cave.

4. The 4th point indicated the location of next red chest, which is protected by shock force field. There would be nothing unusual in this fact, if not the 3 (!) switches that operate this barrier, with only 1 of them active (!!!) on each entering to the map. The locations of these have been indicated with A, B and C:
A - directly below the red chest in Rakk Cave, at the ground level; you can use gear with wide AoE (Storm Front, Norfleet, etc.) to interact with it
B - near the respawn station behind ammo crate, in the middle of the passage leading to crystalisks area
C - behind the boxes at the shelf, can be interacted in the middle of the run or damaged from the ground with AoE gear


SUMMARY
Red chests: 4 (Dahl version)
Rare gear drops: 3 (3 legendary)
Other: possible Tubby Stalkers spawns
Lenght of 1 run: about 10 minutes
One of biggest (if not the biggest) areas in BL2 is supposed to have many chests scatered around to check them. It's true, unfortunately, all of them are common green chest... with the exception of single red chest. Despite that, Dust makes it in the amount of possible rare drops and a high chance of spotting Tubbies. 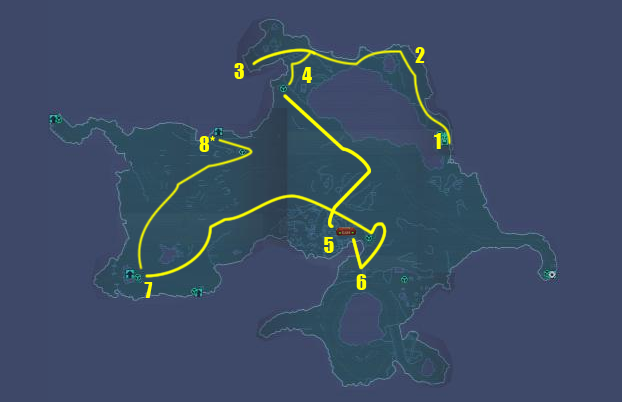 ​
POINTS OF INTEREST
1. Ellie's Garage, where on the rare occasions you can find unique Dahl pistol Gwen's Head. It spawns in the box in the corner inside of the garage.

2. The Bug Gulch - an Spiderant-dominated area, known for high chance for Tubbies to spawn. This route is also recommended because of point #3.

3. This is the place where Black Queen spawns on extremely rare occasions. The mechanics of it's spawning are still not known, but it's said that taking the long route around and activating the checkpoint there does increase the chance of finding this unique Spiderant. Black Queen has a chance to drop legendary Torgue rocket launcher Nukem. Apaft from that, Tubbies can be found there, fighting against the Bandits with common Spiderants.

4. The Boot Hill is the place where you can fight 2 enemies: Mobley and Gettle, minibosses from "The Good, the Bad, and the Mordecai" quest from bounty board in Sanctuary. Mobley has a chance to drop legendary Dahl assault rifle Veruc, while Gettle is the source of legendary Vladof sniper rifle Lyuda (aka White Death). After checking this place, jump down to the Catch-A-Ride in order to get to the next point...

5. ...which is the Goose Roost, accesible only through jumping from the cliff ramp in vehicle. The only reason to go there is the only red chest on this map. After checking it, climb on the cliff behind it and follow it to the very top. Then you can fall down to get to...

6. ...McNally's Shack, which is the house of unique Psycho bandit, a miniboss from "The Bane" mission from Sanctuary. McNally has a chance to drop legendary Jakobs assault rifle Hammer Buster. After paying him a visit, go back to the nearby Catch-A-Ride, respawn the vehicle and go to next point.

7. The Lynchwood Train station is where the shootout between Hodunks and the Zafords take place after the events of "Clan War" quest series. Depending on which side you've allied with, you can get one of two drops:
- Mick Zaford has a chance to drop the legendary Jakobs pistol Maggie
- Jimbo and Hector Hodunk are the source of legendary Bandit SMG Slagga

8*. This point is optional. The Friendship Gulag is a small area connected to The Dust, which has 1 additional red chest hidden on the end of it.

SUMMARY
Red chests: 1 (Dahl version) + 1 (optional)
Rare gear drops: 5 (legendary) + 1 unique
Other: high chance of getting Tubby Spiderants to spawn
Length of 1 run: about 15 minutes
One of my favourite ares to farm - it has 4 red chests, few notable enemies and high chance to spawn both Tubbies and Legendary Loot Midgets from ammo boxes. Also, you can find there Loot Goliaths on rare occasions. Need I say more? 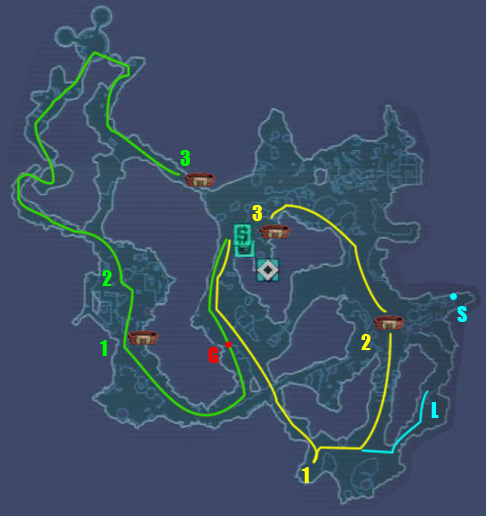 L (optional). The Blacktoe Cavern is a system of tunnels occupied by both Bandits and Spiderants. You can find there unique Dahl SMG Lascaux - it spawns in one of water pools inside of it every time you enter Frostburn Canyon. Remember that if you take this route to obtain that weapon and want to continue farming the yellow route, you'll have to go back.

2. The area above the Cavern is where you can fight Spycho, the abomination created by Zed during "Monster Mash (Part 3)" quest. Spycho is the designated source of legendary Anshin shield Neogenator. Apart from that, one of the red chests is located there, behind a force field. You can disable it by interacting with the switch indicated with the S symbol. It's located on the other side of the hut on the very end of the small bandit camp.

3. The cliff above the Fast Travel station is where the 2nd red chest is hidden. It can be accessed also by rocket jumping from the ground.

POINTS OF INTEREST - ROUTE #2 (GREEN)
G. This is where you should perform a grenade jump in order to get on the legde next to the passage leading to Scorch's area. This makes the whole run faster.

1. The entrance to Ashmouth Camp hides another red chest located on the top of the horizontal pipe. In order to get to it, you must climb the boxes on the left side and jump on the pipes. Note that they are glitchy and you may have to try several times to get there.

2. This is where you can face Incinerator Clayton, the leader of the Children of the Firehawk. He's a boss from "Cult Following: The Enkindling" mission and has increased chance to drop the legendary Maliwan rocket launcher Pyrophobia (NOT NORFLEET which is an unique item with legendary rarity; the only legitimate sources of it are 2 Invincibles: Vermivorous and Hyperius)

3. The very end of the Firehawk's Lair. The last red chest is located there.