"I realize this guide is far from perfect and some of the pics are a bit blurry I just slapped it together while doing an install. lol. if something isn't clear just let me know and ill do my best to fix it"​
Figured i would make another dual nand install guide. This time rather than using the squirt dna board we will be using the Viper dual nand qsb by The Modshop. I've installed a bunch of these now and they are easy to install and really stream line the entire process with quick solder points.

As an added benefit you dont have to cut any traces when using the viper dual nand!

you want to start with an already rgh'd trinity using an acev3. Just like with the squirt you want to use 15432's dual nand timing files.

NOTE: You must use the srgh pack 2 for this mod. The original "release" pack with the 300, 200, 150mhz timings will not work. Before starting, go ahead and find a timing file from the srgh2 pack that gives you acceptable boot times and have it already on the ace. (The ones in the pro folder.)
I start with the files in the Pro/Trinity/ best_timings/ pack_1_best folder. the file 51_1 usually ends up being the best for my wire routing /lengths but your mileage may vary. 50_1 is another good file to try. 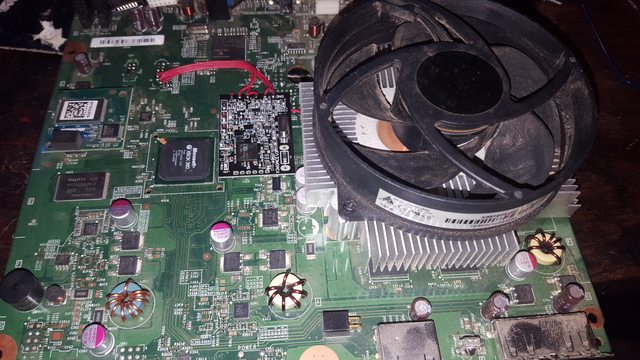 Flip the board over to install the chip. 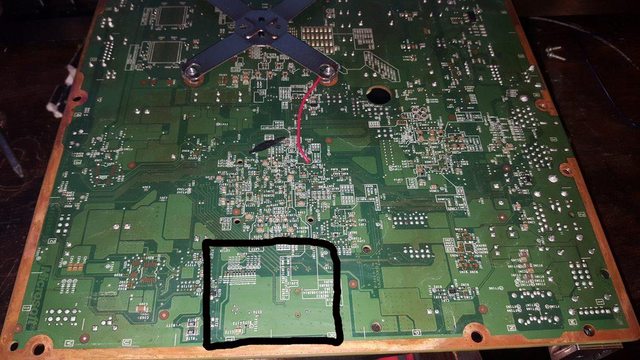 clean up the entire area . Test fit the chip noting where all the quick solder points are. Remove the chip and flux / pre-tin those points. 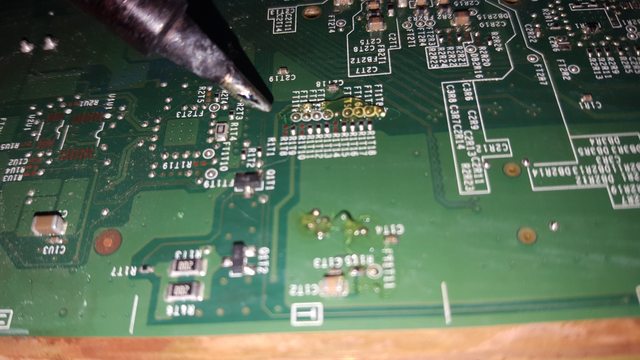 clean up all the flux with 99 percent rubbing alcohol and put the chip back in place. Put some fresh flux on everything that we will be soldering like in the picture below. 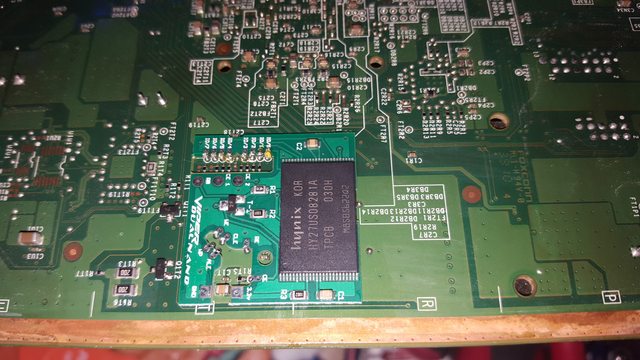 pre-tin your iron and touch the iron to one of the pads of the motherboard and the chip at the same time while holding the chip in place with your other hand. (you could tape it down as-well). once one of the qsb points is soldered in, the chip will stay in place. Be gentle with it though because you don't want to rip out any pads!! now you can carefully solder in all the remaining points to the motherboard. once they are all done you can now bridge some solder from either side of the capacitor to the chip like in the image bellow. (Wow that is a lot of solder!!) 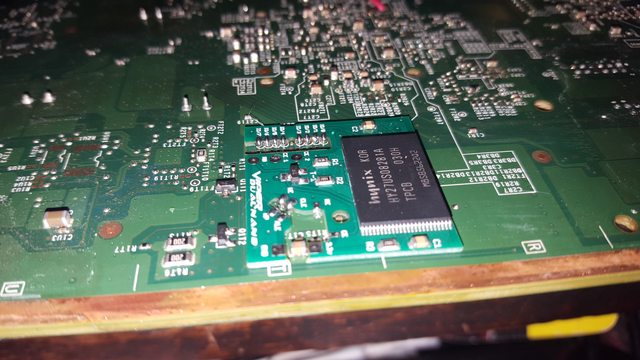 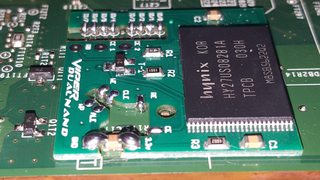 When dealing with qsb points I find it best to come in vertically with my iron, touch the motherboard via, bring in some solder and lean the iron back towards the chip to let it flow.(hopefully that makes sense)

Now start attaching the wires to both chips. we will start with the rb point 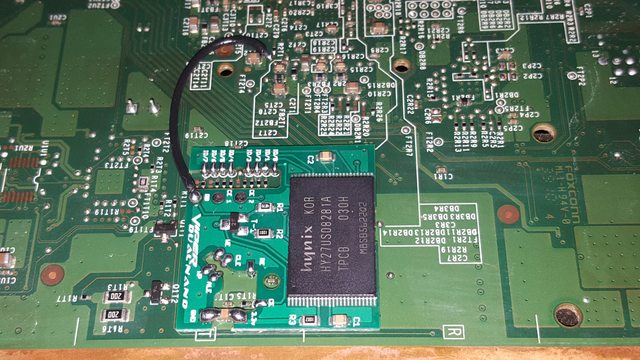 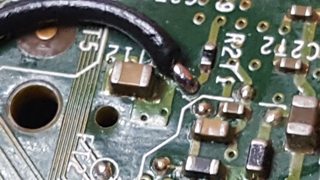 next we will move to the Ace chip and prep the points we will be using. 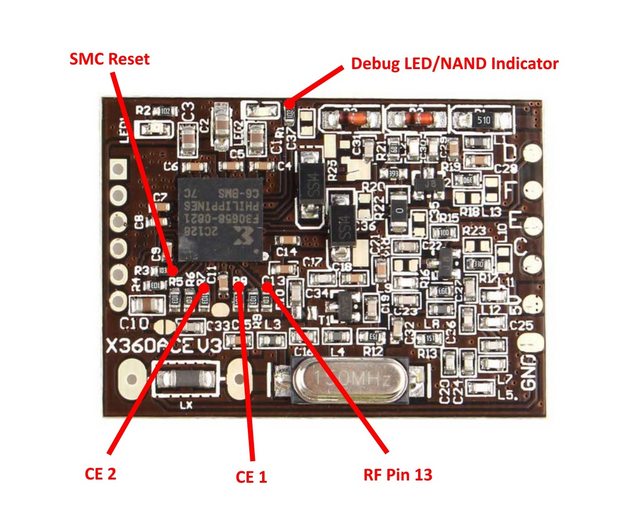 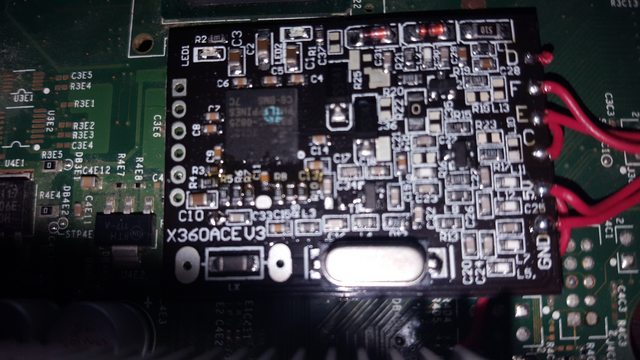 after prepping those points attach the SMC reset wire from the Ace to the motherboard. 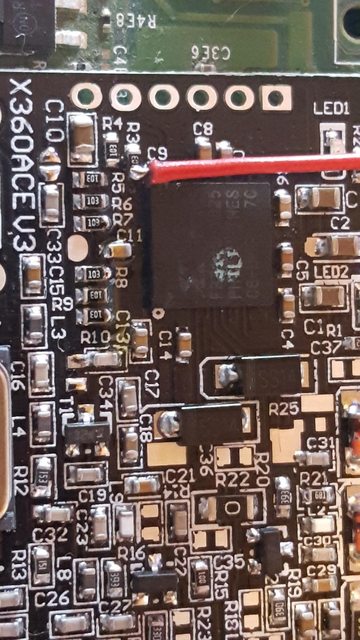 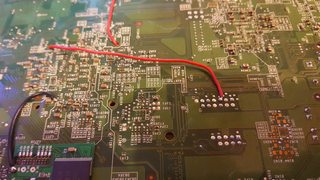 Note: latter on when writing to the nands we will be using the same point (smc reset) on the opposite side of the board. After attaching your nand cable be sure and double check that this bottom wire is still in position and soldered up well.

Next we can attach the two CE points to the Ace. 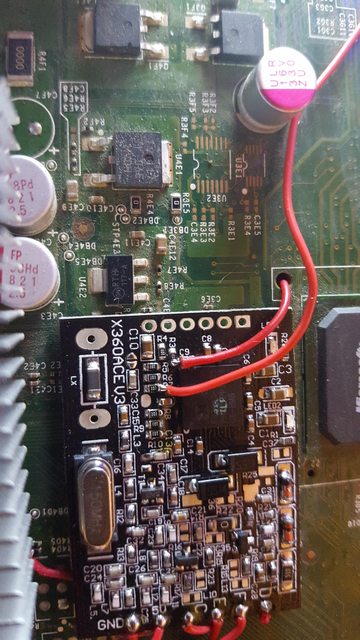 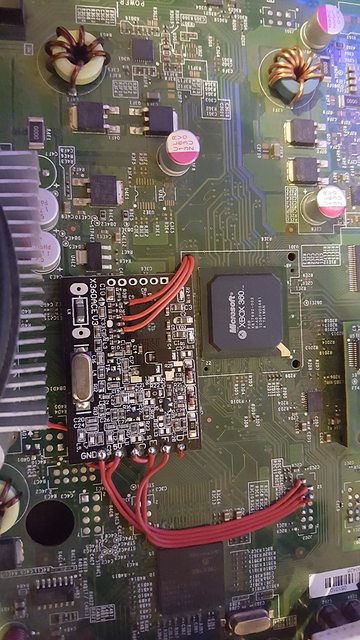 And then run them through the board to the corresponding pads on the Viper. 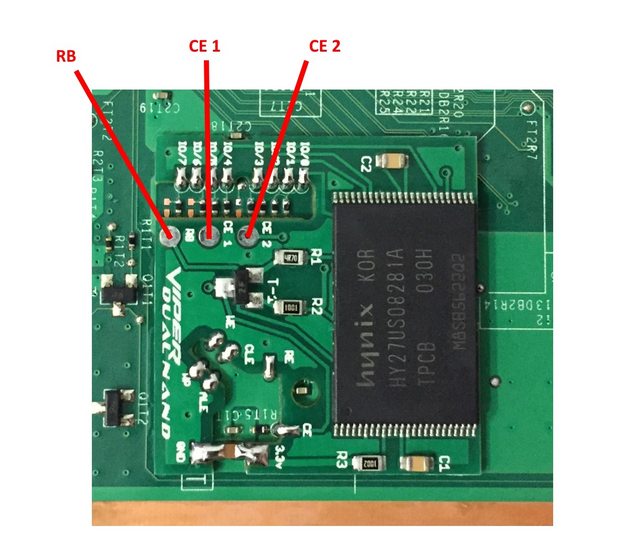 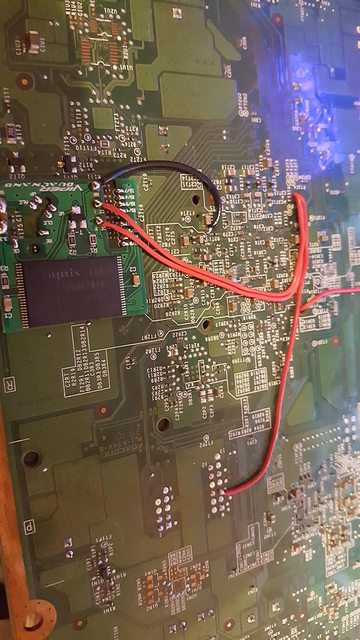 Now we can run the a wire from rf pad 13 on the bottom of the board up to the ace. This will allow us to switch nands using the sync button. 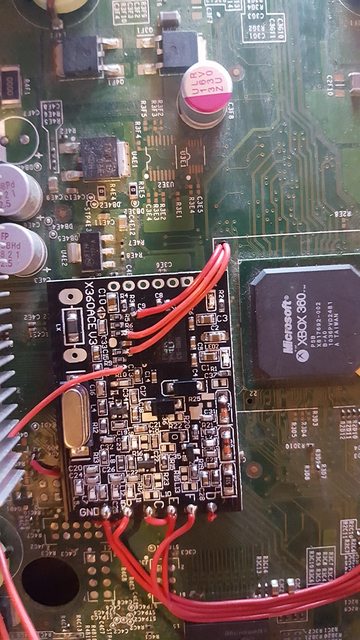 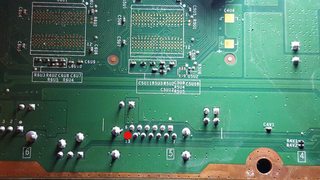 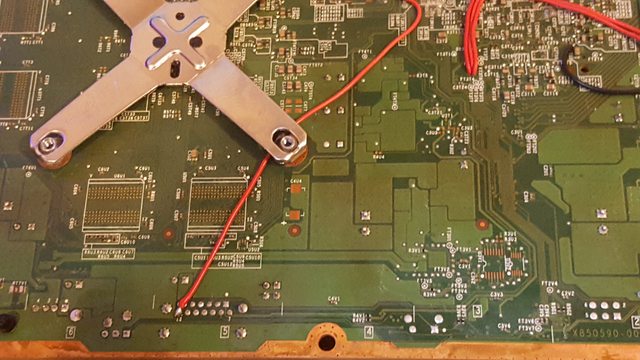 Now, the Ace's debug light will flash when we switch nands. However, we wont be able to see that very well with the console put back together. So we will tap into that circuit and bring it out to an led on the rol. you could just run a wire to the rol or, I like to take advantage of the unused rf pin (4).

Prep the point on the Ace (note: in the official Viper image it shows the top point after the resistor, but I've always used the bottom of it before the resistor). 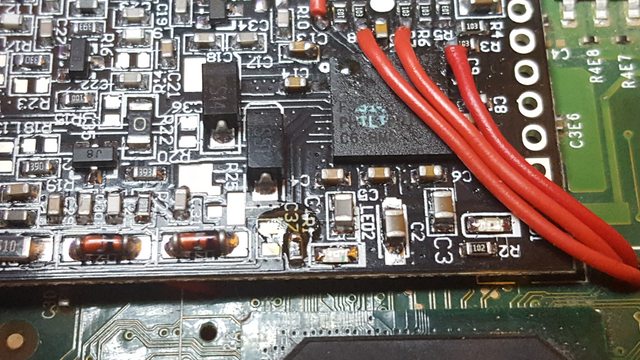 chip is upside down in these images 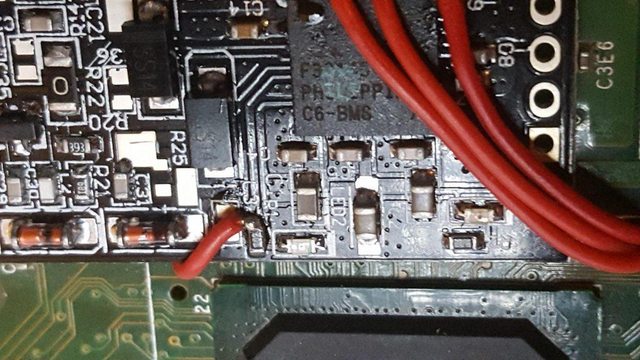 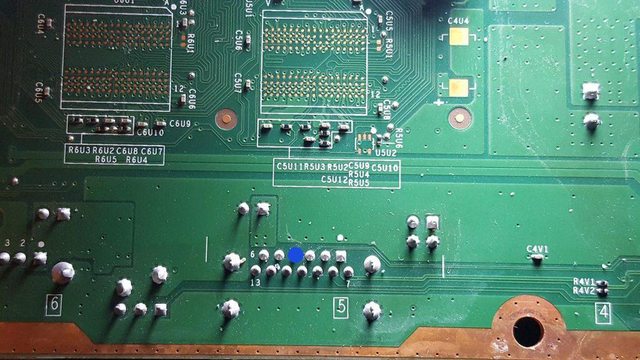 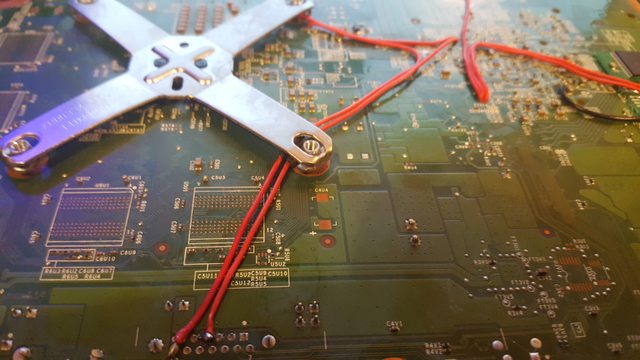 then you can grab it on the rf board from the same pin (4). 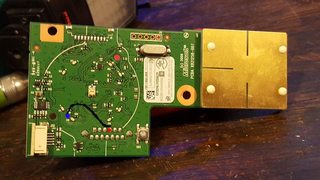 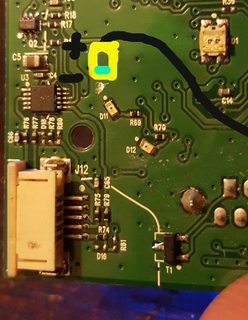 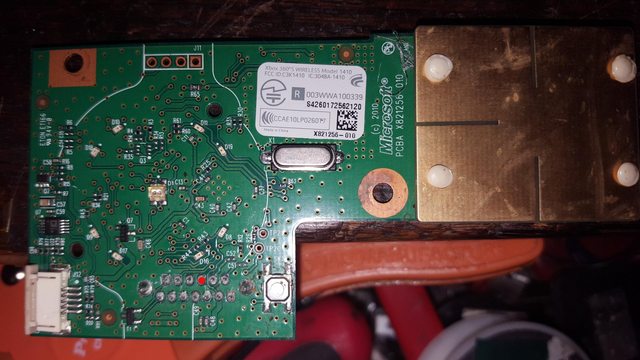 you can then remove some of the pcb coating on the rf board and add some solder to it. attach an smd leds cathode(-) to it, then simply run a wire from pin (4) to the anode(+) side.

Now you can go ahead and attach your nand read/write cable and write your nands however you see fit. Most like to write the stock image to the 360's nand and the xebuild to the addons nand chip. 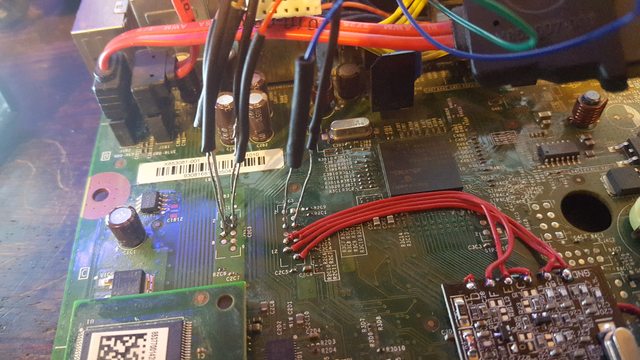 The Viper defaults to the xbox 360's nand first when plugging the power supply in. Push the sync button and the debug will flash twice indicating you are now on the Vipers nand.

Glad someone finally made a proper written guide. When I get a little extra time, I'll add a link to this tutorial from the Vipers official page.
N

This console is for sale with some extras added to it .
click here for the sale thread.
N

plenty of Viper dna chips available. pm me if interested 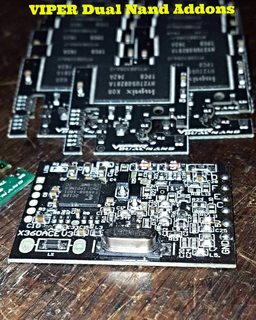 where to buy this in europe?
N

Not sure . The shipping would be outrageous for me to ship there
X

Thanks for taking the time to post this, the videos, and your offer on boards!
T

Nice any Diagram for Corona intstall with the Viper Chip ?
N

Well u would have to run the wiring yourself because the layout is different.
T

Newsk said:
Well u would have to run the wiring yourself because the layout is different.
Click to expand...

Newsk said:
Well u would have to run the wiring yourself because the layout is different.
Click to expand...

I know I would need a QSB which I already have but like you said the layout is different.. would definitely like to try this on a Corona
B

Tgivenchy said:
Is there any pics out there for a Corona Viper Dual NAND install

I know I would need a QSB which I already have but like you said the layout is different.. would definitely like to try this on a Corona
Click to expand...

A addon board is coming soon for corona and phats for the viper.
T

i followed Mr Marios guide and used this guide as backup, my xbox only seems to boot into xell even when i press the power button. does it have to do with the timing file? im kind of lost hahah ive been looking for a guide on this matter using the viper chip but no such luck, any help would be appreciated. also, sorry if i posted in the wrong thread, wasnt sure where to post. Thank you.
N

Well if u don't have one of the dual nand srgh(v2) timings on the ace it won't switch nands . What timing did u flash?
T

I got my dual nand chip from the weekend modder site and got it already programmed but when the file on it didnt allow me to switch between them I flashed the 50_1 file from the best settings folder. but still wouldnt boot into the dashboard it only boots into Xell
N

With the console off u hit the sync button and should notice the aces green debug led flash either once or twice. Then u have to write stick nand to the first default nand (one blink) And rgh to second nand (viper ) 2 blinks

So for starters are u seeing the debug flash with the sync button ?
T

yes, i am able to switch between nands when i hold down the sync button. i havent written anything to the viper nand yet but shouldnt the ace v3 boot into dashboard once i write ecc? or does something need to be written into both nands before i can boot into dashboard?
N

after booting xell you need to get the cpu key and create the rgh 2 image and write it to one of the nands! (most put stock back on xbox and the rgh image on viper or other dual nand board)
T

No problem. U need to have the 17511 dash installed in jrunner and select it when u build your image. It's usually best to completely update the console before you start so your stock side matches.
T

ok awesome got it all worked out its booting both nands. im trying to look for timing files 60.3 and 60.6 since im getting a full minute on load times. anyone know where i can find it? also thanks for all your help i really appreciate it.
You must log in or register to reply here.
Share:
Reddit Pinterest Tumblr WhatsApp Email Share Link
Top Bottom