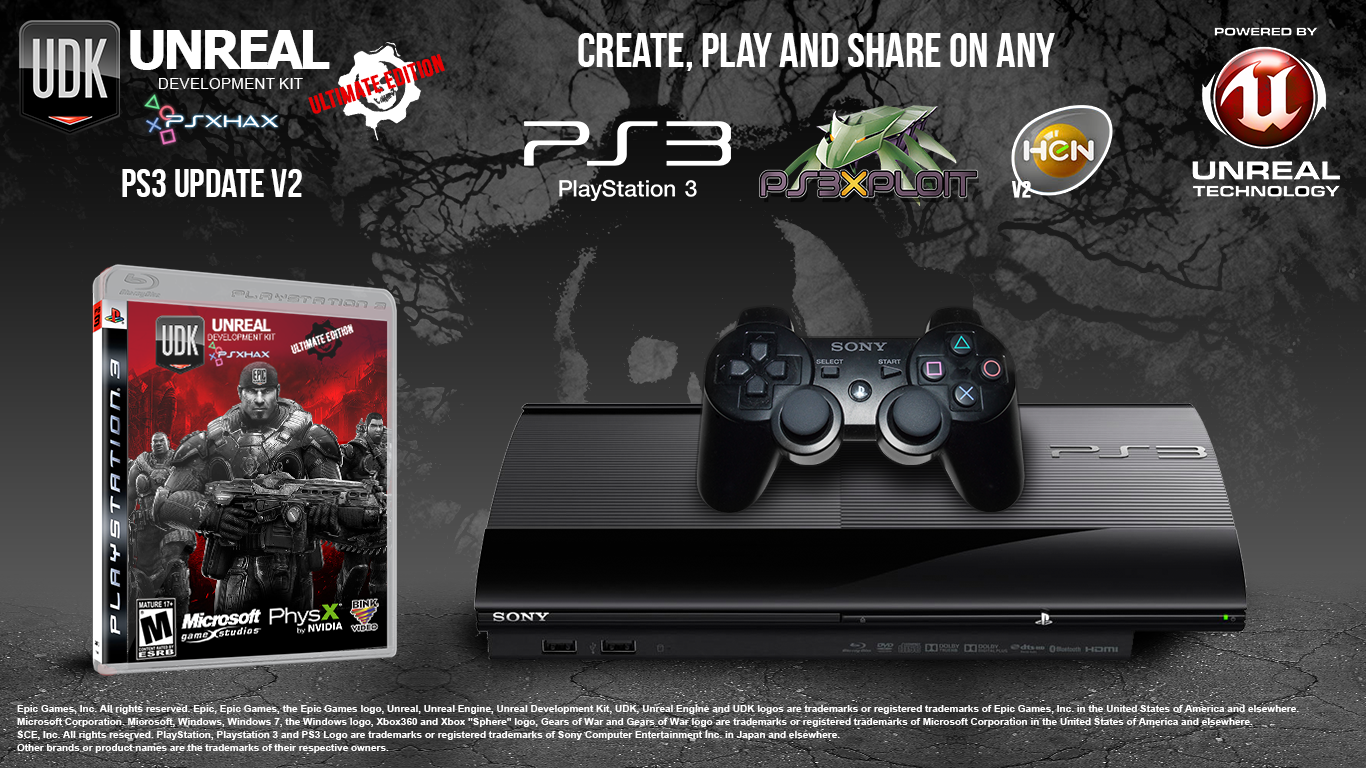 I am the main developer of UDKUltimate Engine, a custom build of UDK which supports export the game to PC, XBOX360 and PS3:
sites google com view udkultimate

After I finished this project in 2017, I began to dedicate myself on a personal project, a game I am developing in UDK Ultimate Engine, which I am going to soon publish here some trailers and a free demo for anyone to download.

So whenever I recently finished the demo for PC, I began to optimize it for Consoles (XBOX360 and PS3). So as you may know, I own a PS3 4K model (Super Slim 12GB), the legendary "unhackable" model, it was until recently.

Thanks to the efforts of PS3Xploit team, and many other PS3 Scene Devs, now anyone can enjoy homebrew games and apps on any PS3 through the installation of PS3HEN (which is stands for Homebrew Enabler).

So I after I installed PS3HEN on my PS3, i tried to run my game, it did not work, so after investigating and asking my friends of PS3 Scene, I learned that I had to do some changes on the EBOOT.BIN resign process so it will be able to run on PS3HEN.

So I did it, and got this working!!!!! This video however is showcasing the UDKUltimate Sample Game which I included on UDKUltimate Engine Download (I want to avoid spoilers on my game ). Sorry for the bad quality of this video, it's because I can't capture footage from PS3, I don't have a HDMI capture card, only a ****** EasyCap . So I used my old Smartphone just to show to anyone that it is working, and is not fake news

And nothing more just than sharing with everyone this new EBOOT.BIN, so anyone can now create, play and share their own games on ANY PS3.

The links and mirrors for this new PS3 Update are the main website of this project:
sites google com view udkultimate

Just extract this folder to the main UDKUltimate Engine folder and overwrite everything there.

This new and updated PS3 Game Template Folder has the new EBOOT.BIN already in place, so you just need to do the procedure to export your game for PS3 (the instructions are the same and are located in the Docs folder, file 2- Readme PS3 Export.txt).

As for those who want to recompile the PS3 Source Code in Visual Studio, nothing have changed, the only difference is that whenever using True Ancestor Resigner to resign the EBOOT.BIN, you just change output method to firmware 3.XX STD (instead of 4.XX STD), then follow the normal intructions.

Cheers for all and happy game making!!! 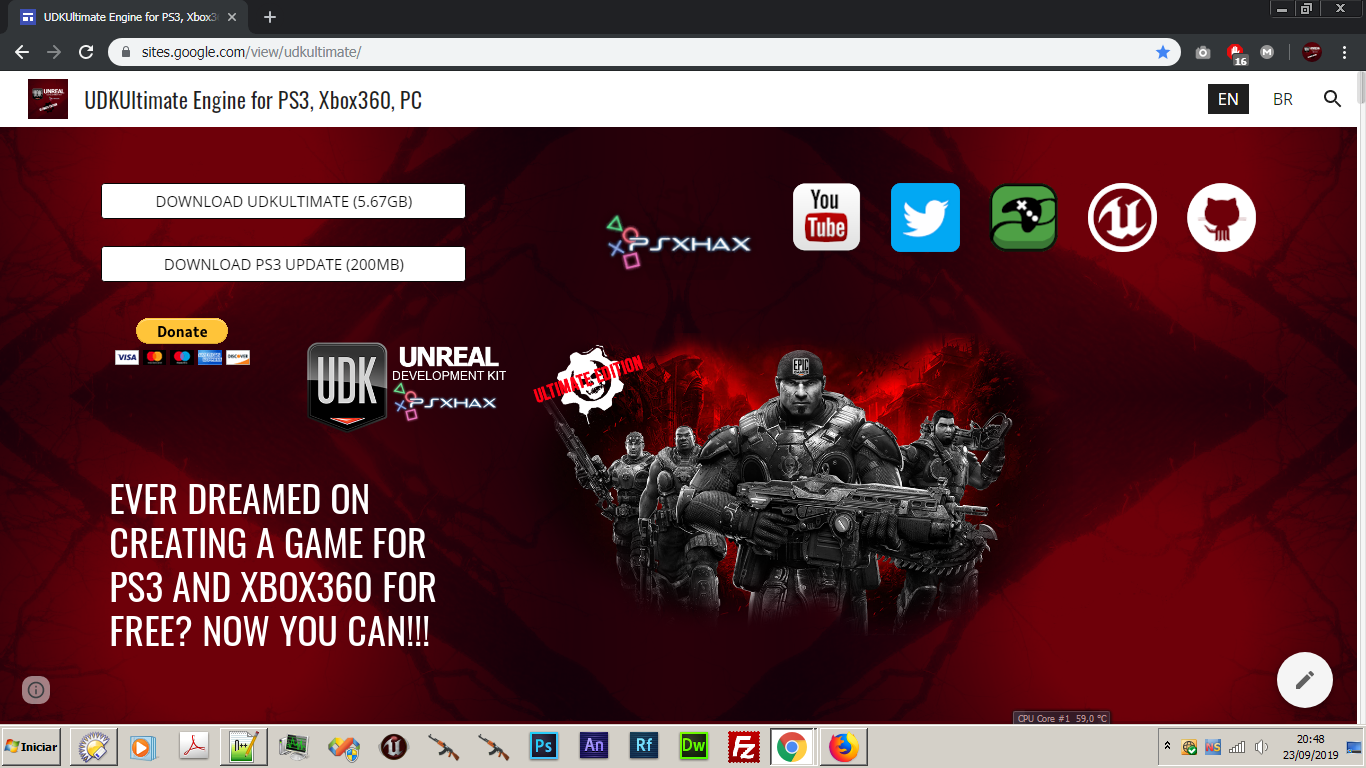 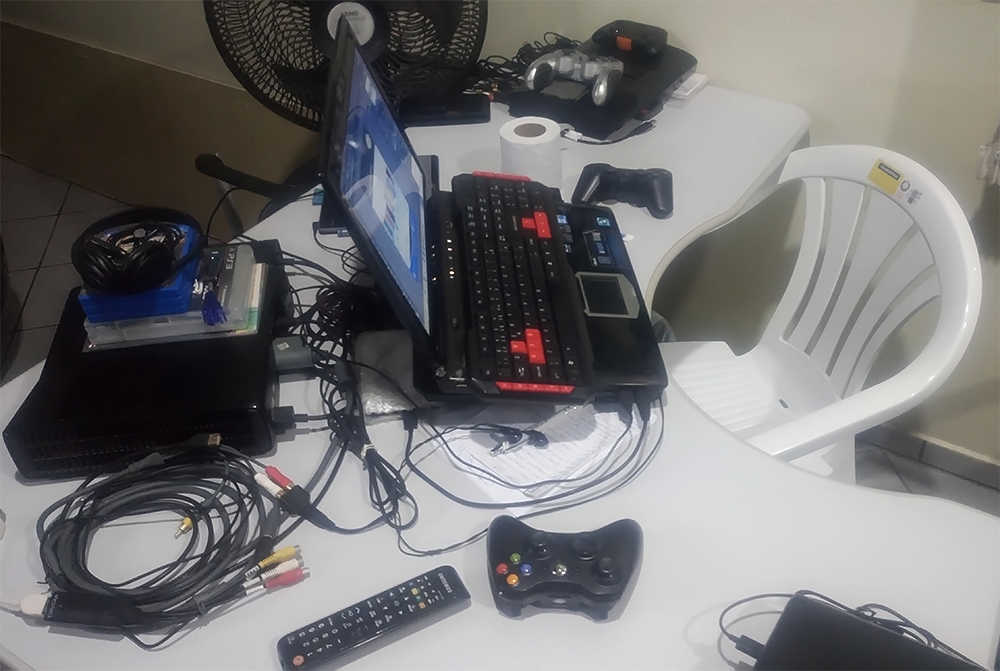 Hello guys. Just take a look at this article my folks at Wololo.net published about UDKUltimate

To make things easier for those who don't have a good internet connection, I uploaded the entire UDKUltimate Engine + PS3 Update to google drive, so now you can download and have fun:
[Click here to view this link] 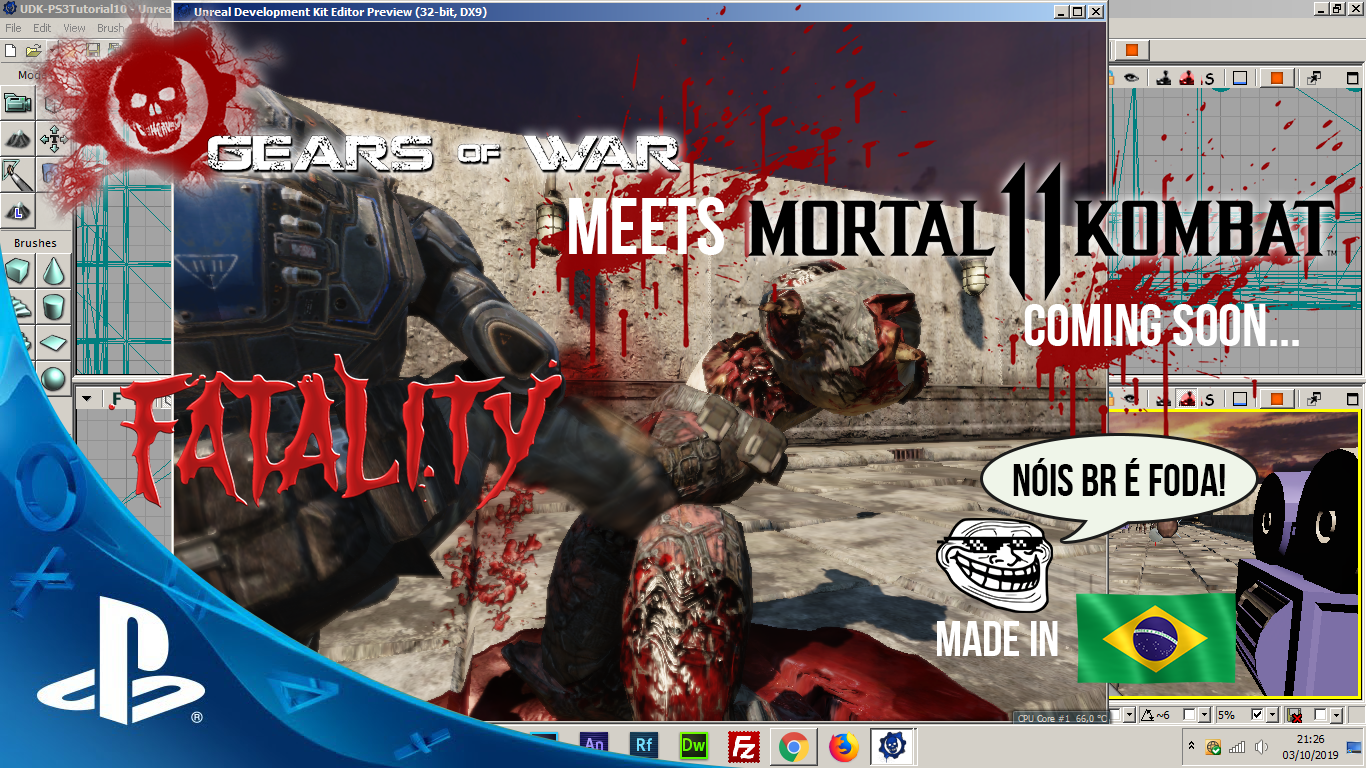 Brand new and free Homebrew PS3/Xbox360 Game made in Brazil!!! 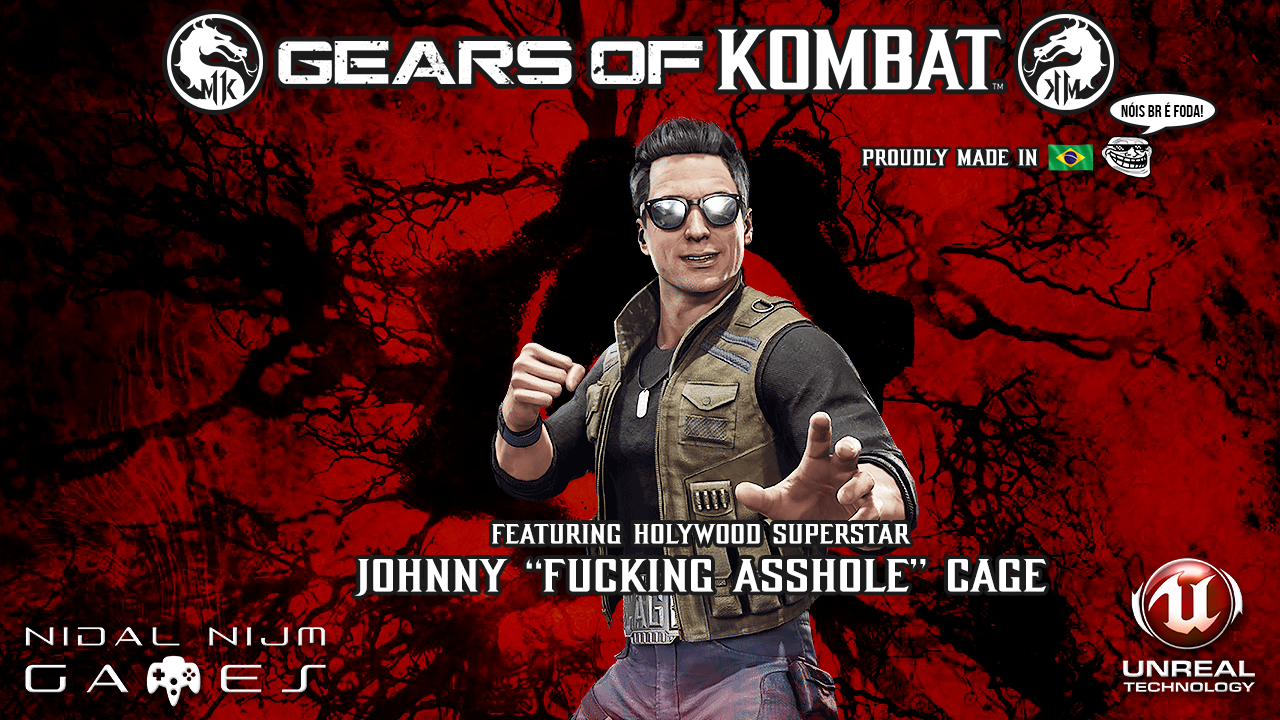 Hello my friends! Recently EPIC Games contacted me kindly asking the removal of all download links of UDK Ultimate Engine (my modified version of UDK Engine), because this violates their EULA, as no one has the right to distribute a build of UDK Engine, only the games created with UDK can be shared, sold, and so on. You can't even include the UDK Editor for people mod your game, only a Full Unreal Engine 3 Licence gives you this right.

However, EPIC games recognized my love for UDK, my passion and dedication on all these years working with this engine, and they were so nice with me, that they officially gave authorization for keep using my own modified version of UDK Engine to develop and publish my games, even for consoles PS3 and Xbox360, by abiding to the normal UDK Engine license terms!

So showing off gratittude to the folks at EPIC Games and respect, first of all, I removed ALL the UDKUltimate Engine files and download links, so, unfortunatelly, no one except me will be able to use it anymore. Anyway, I will be always active in the PS3 Scene, I will keep developing free homebrew games, and also commercial games for PC, PS3 and Xbox360, using my modified version of UDK Engine.

Thank you guys for all this support!

P.S: I updated my website https://sites.google.com/view/udkultimate/ to promote my work on game development. By the way, I placed even a photo of me, so you can know who am I. BEWARE! IF YOU SUFFER FROM HEART SICKNESS, DO NOT LOOK AT THAT PHOTO, BECAUSE I AM UGLY AS HELL

This is my home made 3D Motion Capture Studio. 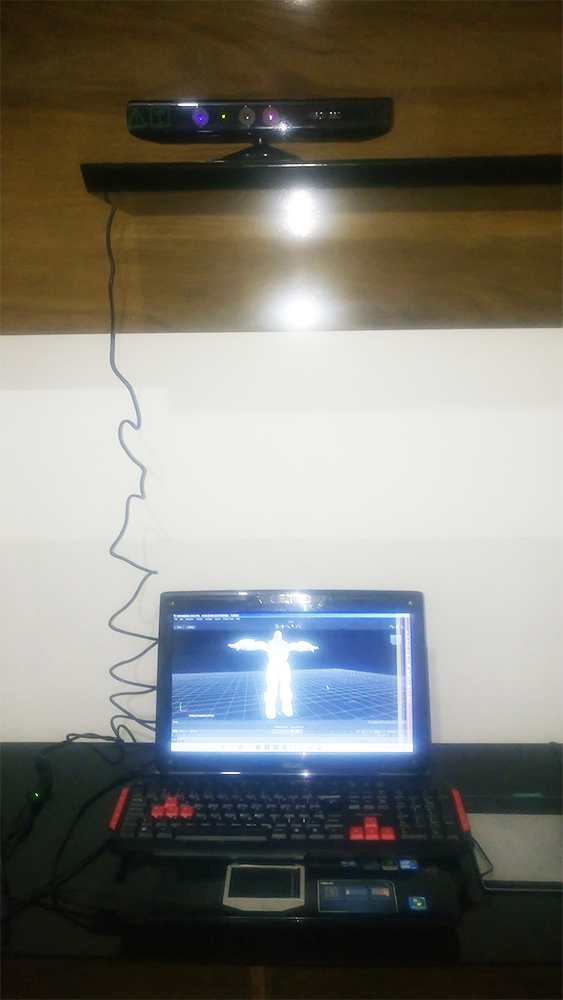 Hey guys!!! As I had commented earlier, I will be posting here on YouTube some game prototypes I have created, various game ideas, which I am still deciding which of these prototypes to turn into a complete game.

This first prototype here was an idea I had some time ago when I was playing Turok 2 on the Nintendo 64 emulator, in my opinion one of the best games ever developed. I was playing and I wondered, why not do a Brazilian Turok in the Amazon Rainforest? It would be top, very cool no?

So I sat down and started researching ideas, 3D map references, and started assembling here, there, until this cool prototype came out here. This prototype took about 3 months of work to finish.

The idea of this game's script would look something like this:

The protagonist of the game (still unnamed) is an Indian, the last descendant of an Amazon Rainforest Warrior Tribe, who decides on his own to protect the forest, the animals, fighting against this criminal organization.

As you can see, the game is still just a prototype, a way for me to put into a game the ideas I had regarding this project. I will not provide download link, because it does not have a gameplay ready, there are many bugs yet, and I have not optimized this prototype for consoles.

Leave your opinions, if you liked this game idea, if it's worth turning it into a full game, and so on.

NOTE: In this prototype I am using some placeholder 3D models , so if I decide to turn this test into a complete game, these 3D models will be replaced for copyrights reasons.

This video here I recorded quickly, right from my cell phone, without editing anything (inside my "garage studio"), just to show you guys a new feature that I implemented for my Game about Middle East War, I'm sure that people will love this game. Anyone who likes Metal Gear, Call of Duty Modern Warfare and Insurgency Sandstorm will enjoy my new game, and next week I will provide a free demo for everyone try on PC, PS3 and Xbox360.

This feature is Force Feedback, more popularly known as Control Vibration. Unreal Engine 3 has this feature already programmed by default, but is not enabled on consoles, and also only for some events (such as vehicle explosion). But I took the ForceFeedback code and implemented it into the weapon code I created for my game, edited a little bit here and there, and it worked!!!! Although you can not see too much the vibration on this video, but you can hear clearly, especially at the end of the video. And for each weapon I defined a different level of vibration, heavier weapons the level of vibration is higher, while lighter weapons like pistols, the level of vibration is lower.

A shooting game is much more fun with this feature, when you shoot, you feel the control vibrating, heavy, similar to being shooting with a real weapon, it is very cool guys! I've only tested it on PS3 for now, but I'll keep testing on Xbox360, as well testing a generic PC gamepad (I have the Nyko Ariflow), which by the way I'll be adding universal support to use any Gamepad in my game, through the Xbox360 control emulator (Xipunt is included in my game), so anyone who wants will be able to play my game with a controller instead of keyboard and mouse.

Leave a like on this video and don't forget to subscribe to my other channel I created for my new game, to continue following the development of that game: