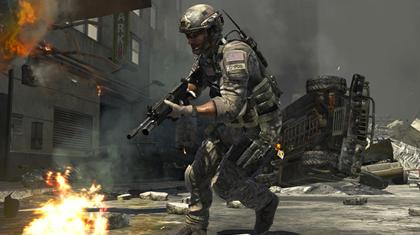 Another great aspect of Call of Duty: Modern Warfare 2 that's getting upgrades in MW3 is Spec Ops, the single-player or cooperative combat aspect of the game.

"All that stuff really fleshes out Spec Ops and adds in a lot that we know our fans are going to love, some of the most addictive aspects of multiplayer," says Infinity Ward creative strategist Robert Bowling.

As we dispatched ever-increasing waves of enemies, I discarded my pistol for a shotgun. Rubin passed me some in-game currency and I bought and installed a turret to keep the evildoers at bay, while I watched for attack dogs.

After a few waves, the attack dogs became suicide bomber dogs that exploded a few seconds after you shot them. The next wave brought the kamikaze soldiers who exploded similarly.

Yes, there are juggernauts returning from the previous games; there will be several different types of them, too. But back in the game, I took heed from Rubin on how to counterattack choppers raining fire from overhead. The game has an unlimited number of waves. "We got up to wave 8 which is really a good wave for a first-time player," Rubin pronounces afterward.

"You were certainly very animated," said Michael Condrey of MW3 co-development studio Sledgehammer Games. "That's a good sign that you were having fun."

In truth, Spec Ops was already a favorite mode of mine that I used in advance of the few times I ventured into the online MW2 multiplayer matches. The developers hope that even more players use the mode to perhaps graduate to multiplayer.

"We have all been challenged. There's such hard-core players out there in the online community and you hear all the stories about (youngsters) swearing and ruining the experience," Condrey says. "With Spec Ops, you can really get in there and hone your skills in a more confined environment. I think it's a little more of an easy entry. I don't have as much time as I did when I was 20 to be honing my twitch skills, but this certainly gives me a venue to experiment."

Adds Rubin, "We added Spec Ops as the third game mode. That is really stepped up this time. It is really a stronger leg of the tripod."
Click to expand...

Nice, really can't wait for this game, it better not be a disappointment though.

I'm not a huge fan of zombies, so hopefully that's not the case

deadGRENADER said:
I'm not a huge fan of zombies, so hopefully that's not the case
Click to expand...

You must suck at zombies -_-
I

Why remove zombies? Such a stupid stupid move. Unless they are making a zombies game seperately..

INFINITY WARD DOESN'T OWN THE RIGHTS TO ZOMBIES... fools

Treyarch aren't the only ones who can make a first person zombie survival mode you know...

Kill Feed said:
Treyarch aren't the only ones who can make a first person zombie survival mode you know...
Click to expand...

I would have thought this in the past, but the direction zombies is going in is just a new map with 2 or 3 new weapons. It's just the same thing every time. This allows you to rank up, get a feel of the multiplayer maps, and kill other enemies besides like 2 or 3 enemy types. If they keep adding content for Survival, I can see it actually being far better than zombies.

Kill Feed said:
Treyarch aren't the only ones who can make a first person zombie survival mode you know...
Click to expand...

You're right they're not. But if anyone else does, I predict a lawsuit.

Taylor Swift said:
You're right they're not. But if anyone else does, I predict a lawsuit.
Click to expand...

Ever heard of Left4Dead?