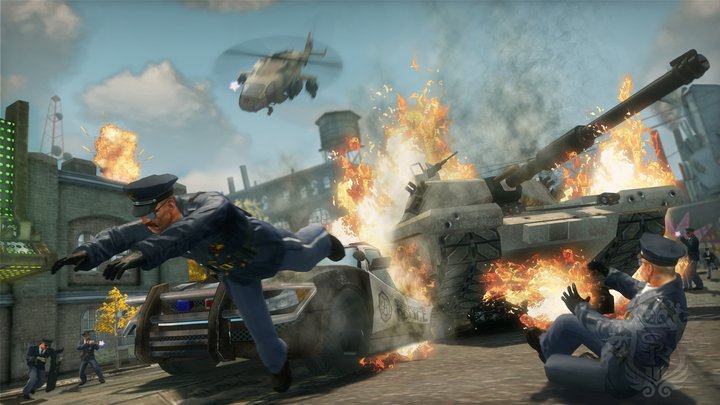 1. When is Saints Row: The Third being released?

1a. The current timeframe is "Holiday 2011". Any dates on the net from various retailers at this point are pure speculation.
Clarification - The word "Holiday" has different meanings around the world. In our case, this refers to approximately the last three months of the year.

2. What systems will Saints Row: The Third be available for?

4. Will I still be able to customize my character? What about vehicles? Weapons?

5. Is Co-Op still in Saints Row: The Third? Split Screen?

5a. Yes, via XBL / PSN / Steam or System Link with full drop-in, drop-out co-op. There is no split screen.

6. Is there competitive multiplayer in Saints Row: The Third?

6a. No. MP was removed so that the team here at Volition could focus on making the SP and Co-Op experience as amazing and over-the-top as we can.

7. I've heard Saints Row: The Third is already finished, is that true?

7a. Not at all. The team here at Volition is diligently working on the game as we speak, adding in more content each day.

8. I have a suggestion for Saints Row: The Third - where should I post it?

8a. Your best option is to use our forums. Each individual can post up their ideas for our game, and then the rest of the community can post how they feel about it and debate each suggestion. A great place to start is the "General Suggestion Thread", which is for very specific suggestions.

Also note that there are many other threads discussing suggestions for clothing (men / women), vehicles, music, and weapons. Feel free to add your suggestion to these threads.


9. Is there going to be a Limited / Collector's Edition for Saints Row: The Third?

9a. At this point, there are no details, but keep checking back for an update.

10a. You sure can, just click here to be whisked to our pre-order page with various retailers.

11. When is a trailer going to be released for Saints Row: The Third?

11a. There is no exact timeframe yet on when a trailer will be released, but everyone here at Volition wants you to see the game in action.

12. Can we create a male or a female character like in Saints Row 2?

12a. Of course! Take a look at our uploaded screenshots for some early examples.

Nice cant wait for it but theres no competive multiplayer