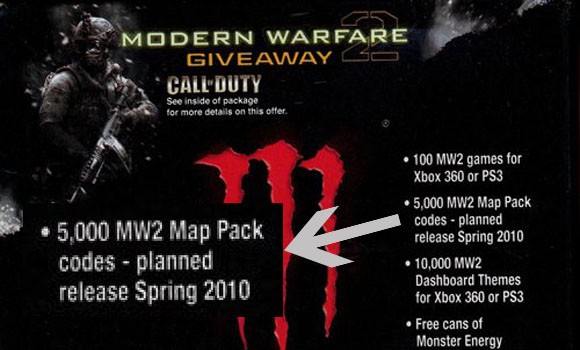 ​
If our trusted sources on, um, this box of Modern Warfare 2–branded Monster energy drinks are to be believed, we'll be seeing at least one map pack arriving for the game by next spring (cue: shock and awe). The Monster boxes arrived this week at various game industry folks' locations, though GameSpot was the first to spot the details of an upcoming contest where 5,000 lucky folks will receive, "MW2 Map Pack codes" with a "planned release" of Spring 2010.

The only thing more exciting than the map pack reveal? Dashboard themes -- confirmed. You ever chug down four Monsters and just look at one of those, man? You can see everything!

...
They've already got DLC ready before the game comes out. Reminds me of Soul Calibur IV, I think it was, where DLC was released days after the game came out. :thumbdown:

They confirmed months ago that they had 2 map packs planned.

i read this earlier today.
i knew they had 2 packs planned, but now we know when the first comes out. pretty much when everybody will get bored