I Am Alive Is Still Alive

I've been wondering what is going on with this game. It was announced at E3 2008 and it just died after that. After confirmation that Darkworks were working on a new title, I was somehow convinced that I Am Alive was not in development. I was wrong.


The game has been rated MA15+ in Australia. This rating was revealed on the Classification Board's website, yesterday. 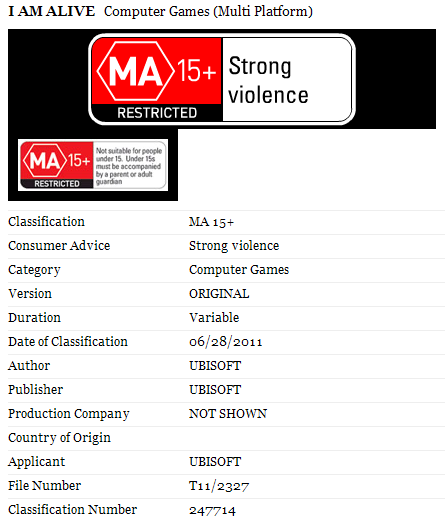 I guess it settles my nerves, but it also gives some kind of evidence that the game is all but complete. Hopefully, that release date is confirmed soon.

Never heard of it til now. Look's pretty cool.

Isn't it coming out as an arcade game?
B

TehGoomba said:
Isn't it coming out as an arcade game?
Click to expand...

It's still unconfirmed whether it will be digital or not.
C

Buzz Lightyear said:
It's still unconfirmed whether it will be digital or not.
Click to expand...


Ah. It looks pretty good. Might pick it up when it's out. Btw check your PMs

That looks amazing like i could fap to its graphics

That looks awesome. Is it about an earthquake?

B
I Am Alive In-Game Screenshots Leaked?

B
I Am Alive Developer Announces Black Death

I Am Alive Official Teaser trailer and in game screen shots.