Tutorial How to use DSTWO SDK

Here came a update news about supercard dstwo team that they have udpated dstwo sdk to v1.2.It was said that this version offers more access and fixes many of the quirks present in the previous edition.

In fact,so called ds2sdk is not a stranger words for most of dstwo players,which is an interface of application layer and driver layer.It's collection of GCC compiler, ds2 hardware driver library,some open source library and an example.It's released to help software lovers to develop program which run on Supercard DSTwo.

Following is a more detail :

"Compared with the previously released SDK, What is the difference of this release SDK?

The release of the SDK contains the biggest bright spot is that the underlying hardware code, also that is source code of libds2b.a,specifically, JZ and FPGA / NDS communications source code. I think the part is the SDK owners who most want to see.The only regret is that you can not see, can not modify the FPGA program, because of the need to maintain compatibility,so the FPGA program will not be easily altered. However, the space left for us has been great. For example, with the NDS program,if interested, you can improve DS2 data transfer, or release of more robust, more practical, and operational SDK.Also, you can develop DS2 Linux with this release of the SDK, it may be tempting to many people, and the long-awaited thing."

How to use DSTWO SDK

In order to use ds2sdk, you need to do the following things:

( 1 ) Setup development environment, include linux environment and cross-compiling environment.
( 2 ) Your application program is required the entry: ds2_main(), ds2_main() is the same as the function of main()
in the general program.
( 3 ) Related hardware and software initialization(Including video, audio, input, output devices and so on):
by the function ds2io_init() or function ds2io_initb() to complete.
( 4 ) Initialize the console: the function ConsoleInit() to complete.
( 5 ) Initialize file systems: by function fat_init () to complete.
This file system can only read and write SD card in DSTWO.
( 6 ) Enter the user main program, hence, the control has given to the user application program. 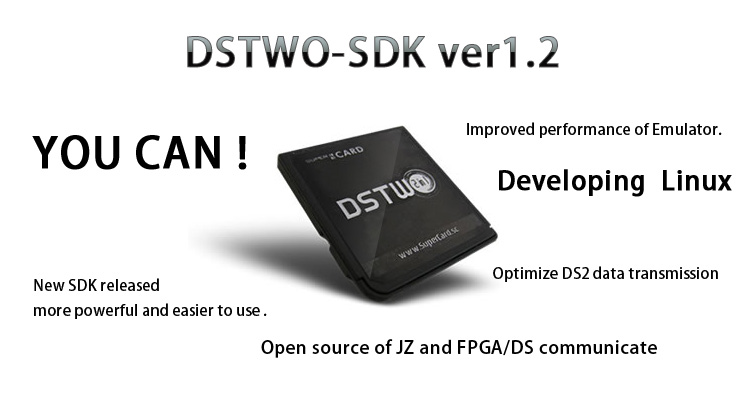