Tutorial How to flash a 360 Benq drive using DosFlash 1.8

Yo, Brand new to this site, and the whole xbox modding thing lol, was bored and thought I would try it out.

When I started out I thought it wasn't reading right, but I noticed it was refereing to a IDE drive and not the Sata. So I said no to the send command until found command and it moved on, and gave me what I needed. Everything was going smoothly until I "think" now. lol

how long is it suppose to take? did I do something wrong?

nm I guess...for some reason the xbox turned off during the process:huh:

ok everything seems to have gone smoothly lol. I have yet to hook the xbox back up.

If everything turns on ok I take it that everthing worked? or is there a way to make sure.

Also I just saw and read the thread about firmware 1.61 has that been released yet? or is that what this version?

Just make sure cause I don't really want to put everything back together if I have to flash my xbox again to update it.

now the dvd rom doesn't power up. I turned the console on and got 3 red lights and I was oh well thats not good, so i turned it off, turned it back on and the red lights stopped but now I get a flashing green light in the center and the dvd drive is still un responsive to anything I do. :thumbdown:

I guess thats what I get for bein bored
E

Re-flash the drive. You may have had a bad flash.
Make sure the sata cable and power plug are plugged into the drive.

If neither of those work. Then you may have bricked the drive.
K

Tried this, but it didn't reconize it..the drive doesnt even power up so Im just taking that its cashed and that Im going to have to buy a new one.

does the term brick relate to just being dead and not fixable?

did I flash it wrong? what would make the drive just die out like that?
there was no spark no funky sounds. I just opened the tray got 3 rings turned off console turned it back on to now be at this point.
E

Yes brick relates to the drive being dead. There are a number of things that may have happened. But in this case I am not sure what happened to you. Maybe just really bad luck and the board fried itself. But as long as you have the dvd key your fine to buy a new drive and replace it.
B

And if he doesn't have a DVD key? What then? I am going through that now and I never figured out exactly how to extract the dvd key.
K

Thankfully I did one thing right...and that was store the orig.bin file in 2 different places.
which contains the dvd key


Bigbird77 said:
And if he doesn't have a DVD key? What then? I am going through that now and I never figured out exactly how to extract the dvd key.
Click to expand...


im curious about this aswell though
E

Bigbird77 said:
And if he doesn't have a DVD key? What then? I am going through that now and I never figured out exactly how to extract the dvd key.
Click to expand...

Callosum said:
Thankfully I did one thing right...and that was store the orig.bin file in 2 different places.
which contains the dvd key

im curious about this aswell though
Click to expand...

If you fail to extract the key from the drive. Then unless your console has not been updated to the August09 dashboard then you cannot recover it at all.
S

hey i'm pretty new to this whole thing. I recently got an XBox and I'm real interested in flashing it

what confuses me is what do i do with the VIA6421 sata card?
I'm going to buy one off eBay but i'm not quite sure what its purpose is.

thanks for any feedback
E

Its a sata card with a compatible chipset that works with all drives. It plugs into a pci slot of your pc.
S

hmm.. do i have to buy it? or could I just unplug one that's connected to my disk drive already?

whoops, never mind, i read other posts and found the answer =]

Thank you for the guide!
It worked out great, I flashed about 5 days ago and finally made some games last night, they work great.

It was so simple with the instructions you gave.

This worked with a GA-P35-S3G motherboard, with the ICH9 Sata on-board chipset.

Sorry for the double post, I couldn't find an edit button.
P

Hey, I'm new here?
SO much for introductions...
Anyway, will this work with 1.61?
Also, Jungleflasher didn't detect my drive because I'm running 64-bit Windows 7. Will DOsflash detect it?
I've read that you can't install Port I/O because it is not compatible with my operating system.
Thanks and HAppy NEw YEar!!!!:thumbup:
E

pspcow said:
Hey, I'm new here?
SO much for introductions...
Click to expand...

Firmware version never matters. Flashing is always the same no matter what version of a firmware you are flashing to the drive.

You boot into DosFlash. Has nothing to do with Windows. So yes your drive will always be recognized.

pspcow said:
I've read that you can't install Port I/O because it is not compatible with my operating system.
Click to expand...

Port IO is not compatible with any 64bit OS.

pspcow said:
Thanks and HAppy NEw YEar!!!!:thumbup:
Click to expand...

For some reason, I can't get the WIn98Boot file in my usb. I go to the boot disk maker and it says that it went fine, but I go to my usb and it's empty. WHat do I do?
E

I put the folder in there manually.
B

Hi all. I am getting really pissed off now. I have a 360 that messed up and it isn't covered by warranty. When I say messed up I mean a dead drive not working what so ever, no power, no laser movement, no spinning. That being said I tried to extract the key from the drive using all the programs mentioned but still nothing. My question is this. If I get a mod chip would still need the right dvd key if I replace my dvd drive? All help greatly appreciated.
E

I think my BenQ is stuck in vendor mode. I got into dosflash and it recognized it but when I tried to read from the drive it gave me weird results. 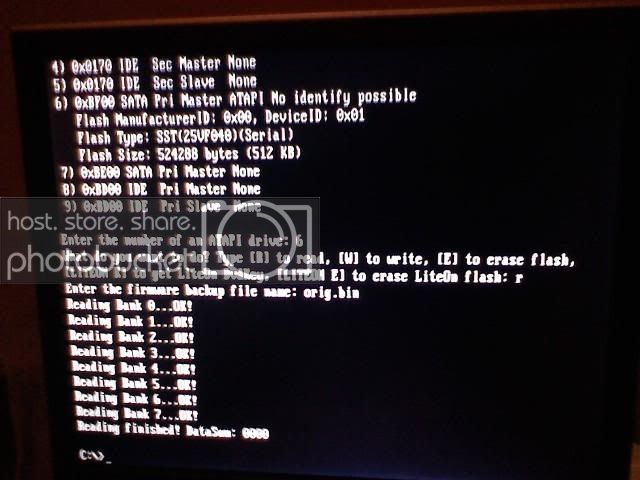 Did I brick my drive? x.x
K

what are the chances in getting banned for this

Tutorial How to Flash a BenQ Xbox 360 using Jungleflasher

Tutorial How to Flash a BenQ Xbox 360