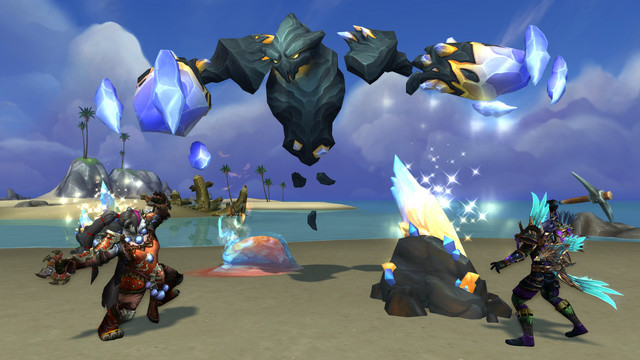 There’s something special about repeatable content in World of Warcraft. The dungeons and raids that we’ve always known are played hundreds of times by each player over the course of the expansion, and they’re expected to be fun and interesting each time.

Diablo 3 trades out the handcrafted experience of dungeons for a more random option in its Rifts. Not every Rift is great, but the potential for fun is always extremely high. Battle for Azeroth, WoW’s seventh expansion, aims to combine the best of both worlds with the brand-new Island Expeditions feature.

Polygon was given the opportunity to test out Island Expeditions on Blizzard’s campus earlier this week, and the demo didn’t disappoint.

The demo drops you onto an island — with far more archetypes in the rotation when BFA releases — and asks you to complete a simple task: collect 6,000 Azurite, the new power mineral native to the planet. The catch comes when you realize the Expedition is a race against the other faction. Whoever collects their Azurite the fastest wins. 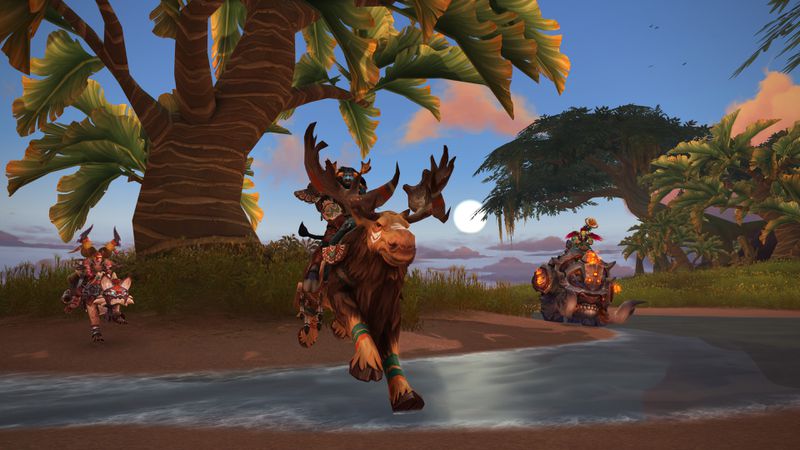 My crew had an interesting composition: a Warrior tank, a Demon Hunter tank and a Warlock. The Expeditions are role-agnostic, meaning it doesn’t matter if you have three tanks, three healers, three DPS or the famed Holy Trinity, you should be able to complete the Island.

Because we had two tanks, it changed how we were able to play. We killed slow but we could pull targets fast and fight forever. And our caster didn’t have to worry about dealing with any threats.

The composition we were up against was a group of holy Draenei. They were controlled by Blizzard’s new “Clever AI,” meant to replicate real players with real objectives. When we crossed their path, we certainly didn’t mistake them for human, but they were far more formidable than the “walk up, hit face” AI that players have seen for years.

Our crew was rolling along the beach, collecting Azurite, and decided to go raid a pirate ship anchored off of a small dock. As we got close, we noticed some glowing hammers spinning off of the ship; the Alliance. “Oh, they already took it,” one of us said before charging headfirst into the enemy. Before we could space out into our rotations, the AI kicked back and took us out quickly. The healer ran away from the tank, their mage targeted our Warlock, and their tank kept our tanks from getting to their backline.

Before we knew it, we were wiped. 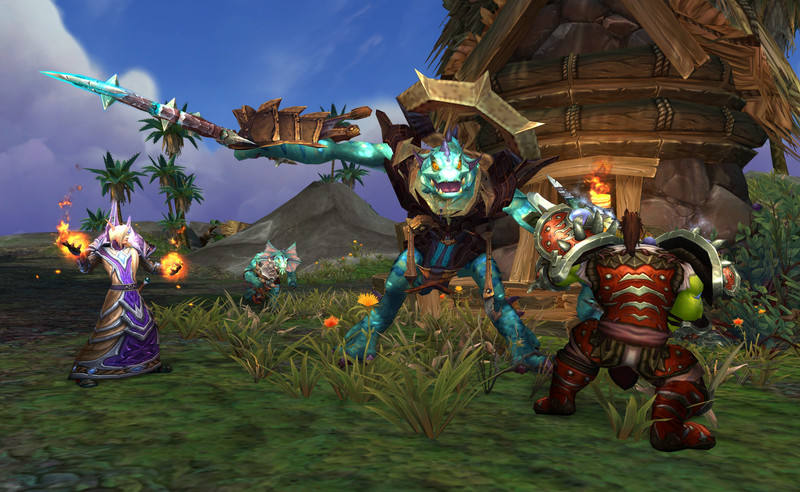 Surprised by the AI, we spawned across the island and moved forward, opting to go over the hill in the center of the landmass rather than along the beach. We fought some more big mobs and took out elite enemies easily. Despite our earlier setback, we were winning the Azurite war.

We moved down the other side of the hill and onto the beach across from our spawn point. There was some kind of event going on here and Azurite was sticking way above ground, complete with lightning crackling from the mineral’s tip. Giant beasts made of the stuff even surrounded the crystals, ready to defend their home. With dollar signs in our eyes, we stormed in and took out the monsters, saving the biggest beast for last.

As we turned to pull the final monster and claim the Azurite for ourselves, the Alliance showed up again and attacked the elite. This tagged the beast, meaning that we wouldn’t get any credit even if we killed it. Instead, we opted to fight the Alliance once again.

This time we took the fight seriously, our caster focused on their healer while one of the tanks interrupted their healing abilities. The enemy tank was too busy dealing with the big monster they pulled to actually focus on fighting us. The pressure of our team and the monsters the Alliance had challenged proved too much for them and we took them all down. The monster, still low on health, became tagged to us. We killed it and the beach began to change.

Where the island had been tropical, it was now ablaze with fire elementals. Our tanks looked around the beach while the Warlock clicked on a new portal, teleporting them to a Fireland far away. Seeing we were separated, the Alliance returned from their respawns and took us out one by one. 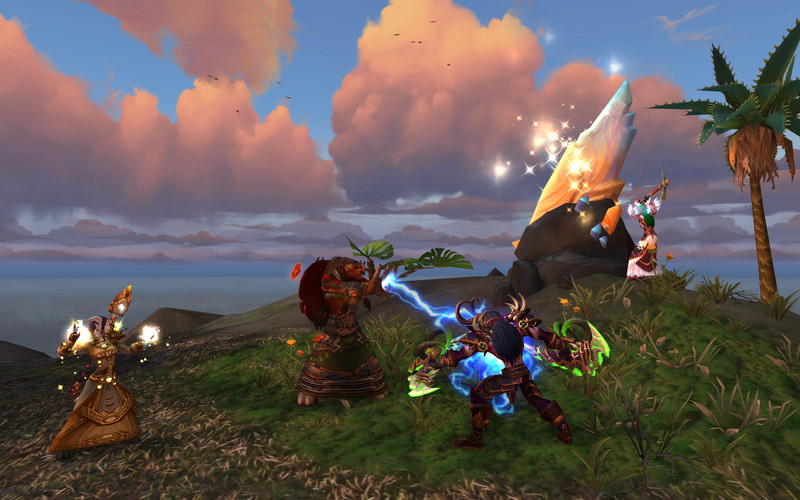 Once we respawned, we regrouped and decided to return to the flaming beach. The Azurite race was coming to a close and both teams were close to the finish line. As we went back over the hill, it became clear that the entire island was now on fire, not just the beach. We rolled from one side to the other, pulling fire enemies with us.

The Alliance was still on the other side, cleaning up the flaming mess that the beach had become. As we slammed into them with our trail of flame lords behind us, it became clear that the fight would be too close to risk.

Instead of facing them head-on, our Warlock made a call in chat to jump into the portal. All three players entered and faced down the flaming boss within, completely ignoring the Alliance threat on the other side of the dimension. As we took him down, we gained enough Azurite to win the battle and claim the island as our own.

We may have never mistaken them for human, but the AI’s tenacity made beating them deeply satisfying. And this was the AI at their easiest. We were only playing on the normal difficulty, but on Battle for Azeroth’s launch, the feature will promote Heroic and Mythic as well as a PvP variation.

Battle for Azeroth already has the great end-game features from Legion. Mythic-plus dungeons, raids and World Quests will be available for all level 120 players. But Island Expeditions offer something else entirely. Dungeons are fun because you learn and perfect them over the years of playing them, but Island Expeditions promise something almost completely different every time you play.