We Happy Few: A Dive Into Madness 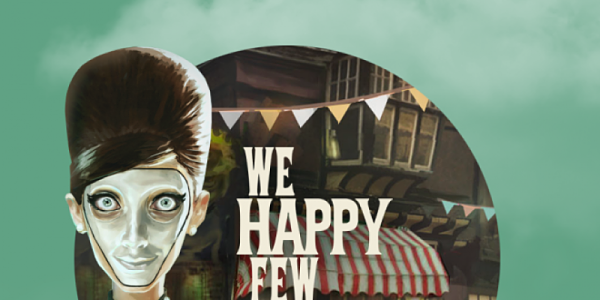 ​
Many of you probably are not aware of the new project Compulsion Games has been working on since early 2014. You may recognize them for their work on the Playstation title Contrast. Their new IP titled We Happy Few has been in development and kept under wraps since the start of its development. We Happy Few is set in an alternate England which is best described as a drug filled, retro-futuristic city. As told on their website, the devs say "you will have to blend in with its other inhabitants who don't take kindly to people who don't abide by their not so normal rules". What you will recognize instantly when you take a look at the screenshots and videos so far are the eerie citizens with permanent smiles on their faces. Everyone in the city seems to have these same facial features which is unsettling.

We Happy Few is currently in development for consoles and PCs, although the developers have not specified whether it will be current gen only for consoles. The devs have stated the this will definitely not be a mobile game and will not be free to play. Other than this bit of information, not a lot is known about the game other than what is seen in the trailer (depicted above) and the various screenshots of the game. At first glance. you might see the resemblence to Bioshock which the devs stated wasn't an inspiration, rather the two devs share the same influences. Compulsion Games' first game, Contrast, received high marks for its style, but fell short with the gameplay. From what is shown thus far, the game looks like it will be following in the same suit regarding the style.

Compulsion Games will have a booth at the upcoming PAX East event in Boston for those who may be attending the event. The devs state that they will be allowing event attendees to play early stages of the game and will be holding a draw for people to get selected into what they're calling the "pre-alpha". There is a task which they describe as "super special and probably quite difficult" in the PAX build which will guarantee access into the alpha. They will be opening up development meaning that they will be heavily taking player feedback into consideration. Community feedback is valuable to the team and will play a major part in the development of the game. This is great to hear considering the blind eye the gaming community sometimes gets when it comes to player feedback.

All in all, We Happy Few seems like an interesting title that I am most certainly looking forward to hear more about in the near future. What do you guys think about the new title?