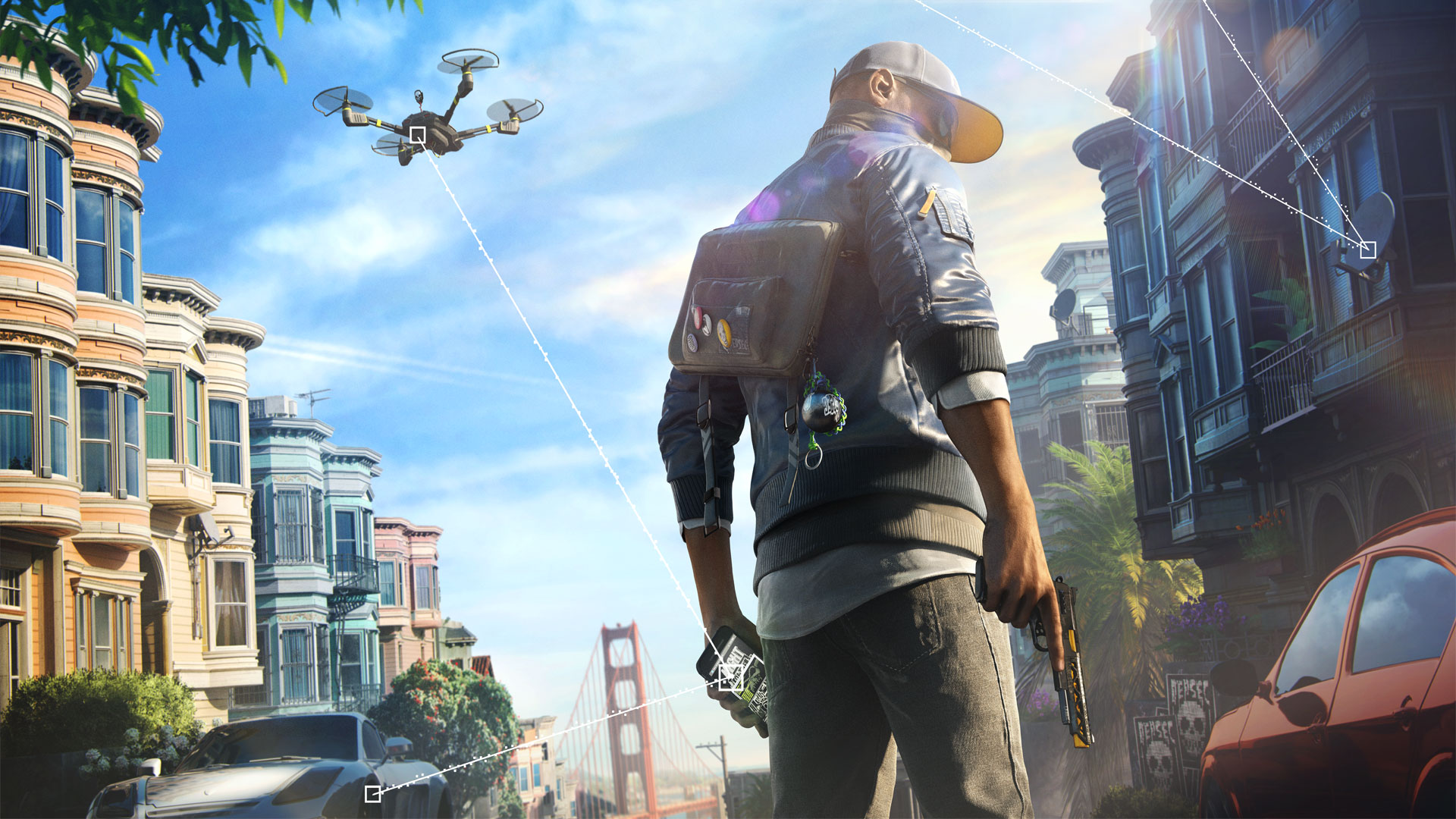 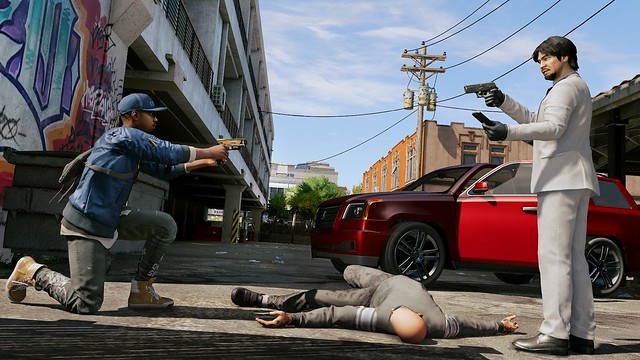 ​
Human Conditions, the second DLC for Watch Dogs 2, will be released February 21 on PS4. This is our biggest content addition yet, adding more than five hours of gameplay with three brand new DedSec operations, and an Elite Co-op challenge with endless replayability for hardcore hackers.

To give you a little more insight into the narrative and gameplay experience of Human Conditions, we asked producer Fabian Salomon (from the Ubisoft Paris team who developed this DLC) and scriptwriter Ethan Petty some questions.


How will Human Conditions build upon the main story of Watch Dogs 2?

Ethan: These operations fit snugly into the middle of the main story where DedSec has upped its game and is looking to tackle more hacktivist issues. They’re picking targets that will help them not only gain followers and positive press, but also to fight back against abusive technology. With that said, you will need to have met a couple of the key players in your game before you can dive into these.

What kind of enemy is DedSec up against this time?

Ethan: The stories here will primarily put you up against several corporations and their high-tech security as well as the Bratva (Russian Mafia).

What do you think fans will be most surprised by in the story?

Ethan: The characters. Fans of either Watch Dogs games should find plenty of surprises here and some really fun character moments. I want to say more but I don’t want to spoil anything! It’s a really fun experience overall!

Raymond “T-Bone” Kenney shows up in Watch Dogs 2 to help DedSec find their purpose. What impact will Jordi have now that he’s being thrown into the mix?

Ethan: Jordi is a creature of chaos and he brings that with him. I think it’s pretty clear he’s never going to get a membership badge, but his goals may temporarily align with theirs. They just need to stay out of his scope.

What’s most exciting about having old characters interact with the new ones?

Ethan: By the time you’re bringing back old characters in a new game, you know everything about them. You know the mannerisms by heart. You know the actors behind them and can write to their strengths. These are your tested (And approved!) building blocks. Bringing them face to face with new characters is going to help you refine the newcomers. What does it take for somebody to stand up to T-Bone? To Jordi? When we brought back Ray, we already knew how he would react to each DedSec member and had a good idea what he could bring out in them. The fans probably did, too. 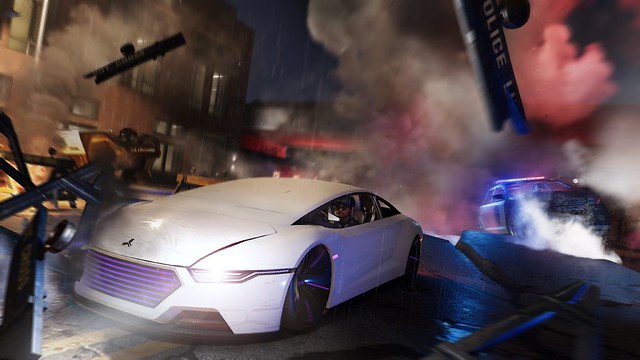 ​
What new gameplay elements are being introduced in Human Conditions?

Fabian: In Human Conditions, we wanted to build and expand upon what made Watch Dogs 2 such a great game with many new gameplay opportunities that players can experiment with.

Our team had a lot of fun expanding on a variety of well-established mechanics like drone navigation, net hack or VR puzzles, and really bringing them to the next level!

We don’t want to spoil too much, but you can expect a lot of dynamic and action-packed missions!

Are we adding new co-op missions or just upping the difficulty?

Fabian: The Elite Co-op challenge is a brand new harder mission designed to be a lot more challenging than the one in the base game. In this new challenge, DedSec is trying to learn more about, and stop, a new group of hackers called Hooks. They are making deals with criminal groups all across the bay, and they are packing a punch!

Unlike regular co-op missions, they take place in much larger parts of the world, blurring the lines between the open world and the mission area.

They will also include the new enemy archetype, the Jammer.

They are compatible with our Guest mode, which allow the DLC owner to invite a non DLC owner to join Elite missions (and mayhem) for free.

What was the main design intention behind adding the Jammer enemy archetype?

Fabian: The Jammer is a new enemy archetype that wears a new device that deactivates all hackable objects and hacking opportunities in a limited range around him.

We felt that it would be interesting to enrich the player experience with a new mechanic that forces him to adapt his playstyle dynamically. When there is a Jammer around, you really need to quickly adapt and change your strategy. Of course, Marcus has different ways to counter the Jammer, but I’ll let you discover them by yourself! 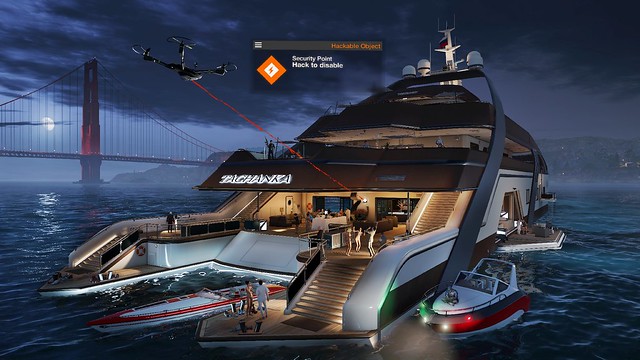 ​
Are you expanding the map or adding to the world in Human Conditions? If so, does this mean the online community will be split?

Fabian: We are not expanding the map per se, but we’re adding and updating tons of new locations within it for our players to discover. You will be able to find new interiors, like tech companies and corporate HQs, but also revamped and updated areas from the main game like a new medical mobile clinic, a homeless camp, or a massive yacht (named Tachanka) in the middle of the bay! There is definitely a lot of new locations to explore.

We also wanted to make sure these changes would not split our community by tying them to the DLC! All of the new locations will be accessible to all players through the title update.

How did feedback on the base game influence the content and design of this DLC?

Fabian: We’re always listening to the community in order to create a better experience. For example, we know some of our players felt the missions in Watch Dogs 2 did not have enough checkpoints and this is something that has been addressed in our new DedSec operations. It makes for a less punishing experience. We’re constantly updating the game outside of DLC releases, and you can read about changes and improvements in the Patch Notes posted on our website.