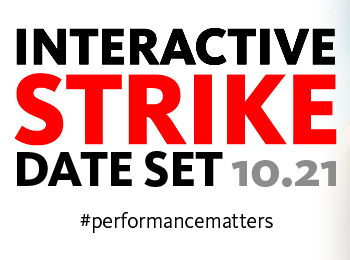 After voting to declare a strike if necessary, the guild representing voice actors has now announced when the strike will occur, should it not be able to come to an agreement with the gaming industry. This will happen on October 21.

The guild, SAG-AFTRA, announced on its website that it has tried to work out a deal with the video game industry for more than a year, across multiple negotiating sessions, all of which have failed. The next negotiation session will take place October 17-19 "with the goal of creating a fair contract that is rooted in industry standards and best practices."

​
SAG-AFTRA says that its package of proposals is "not loaded with any crazy demands." Several prominent voice actors have spoken out in support of authorizing a strike, including Roger Craig Smith (Batman, Assassin's Creed), Jennifer Hale (Mass Effect, Guild Wars), and actor Wil Wheaton.

SAG-AFTRA said it's not confident that it will be able to reach a deal. As such, the strike will begin on October 21. The union said voice actors should be prepared to strike on projects that went into production after February 17, 2015. SAG-AFTRA said actors should strike against 11 companies, including some of gaming's biggest players like Activision, Electronic Arts, Take-Two, and WB Games.


"Through many months of bargaining with interactive employers, we have not reached a fair agreement covering SAG-AFTRA performers working in video games--often the most popular games in the world," SAG-AFTRA president Grabrielle Carteris said in a statement to Deadline. "A strike is not to be entered into lightly, but when the employers leave us with no recourse, we must stand firm for our members. It is imperative that we secure for them the protections, compensation and benefits they deserve."

According to the union, the gaming industry refuses to offer residual payment bonuses and other profit-sharing opportunities. Additionally, the union claims that the industry has denied a proposal that would reduce the recording time for "vocally stressful" sessions to two hours to help prevent an actor from damaging their voice.

Another proposal put forth would allow publishers to fine SAG-AFTRA "tens of thousands of dollars" if an approved agent is not involved with every audition for their client. The industry also reportedly wants a provision that would allow them to fine actors $1,000 or more if they show up late to work or are deemed to be not fully participating in a recording session.

"We consider the Union's threatened labor action to call a strike precipitous, unnecessary, and an action that will only harm their membership," Witlin claimed. "SAG-AFTRA represents performers in less than 25 percent of the video games on the market. Any strike would not only deny SAG-AFTRA's membership work, but this would also give their competitors, who do not engage union talent, a leg up while any strike would be in place."

As it stands, video game voice actors represented by SAG-AFTRA are paid at least $100/hour, plus benefits, Witlin explained.

"The [video game industry's] current proposals on the negotiation table includes wage increases for most performers and additional avenues for compensation that could yield many hundreds of dollars more in payments for limited integration and ratification bonuses," he said. "Although the Companies have had only one report of workplace injury due to vocal stress, the Companies have continued to look to ways to reduce the burdens on performers in this area through the more flexible work scheduling and other innovative work arrangements."

Witlin also called out the SAG-AFTRA strike website, which he said contains "inaccurate and out-of-date" information about the negotiations and proposals.

Additionally, he said the existing collective bargaining agreement has a "no-strike provision" that will allow development on most current and near-future games to continue development unabated.

"We produce Interactive Video Games for the enjoyment of people around the world and as a result we provide excellent jobs for many SAG-AFTRA members," Witlin said. "Reaching a reasonable agreement is in the best interest of all parties, as well as the many fans of our games."

Keep checking back with GameSpot for more in the days ahead.