[UPDATED] Ubisoft Reveals the First Year of Content for The Division 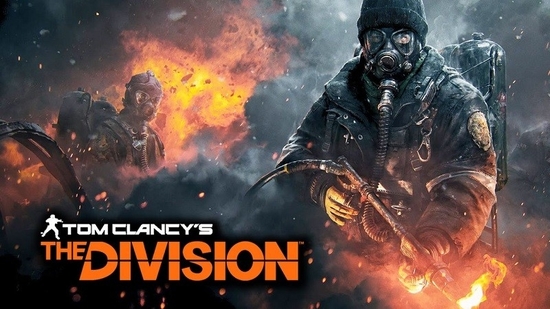 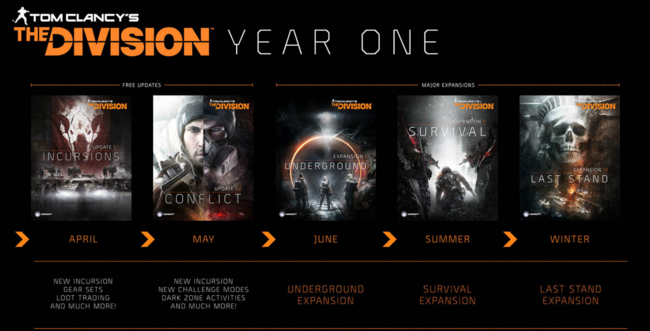 Less than five days away before we can all enter, or re-enter The Dark Zone and begin raiding the hell out of every building and point of interest that we can find. With the game’s long-awaited launch so close by, it was only right for Ubisoft to bring to light the road that The Division would be heading on in the 2016 year ahead. We had already known about the Incursion Gear Sets and Loot Trading within The Dark Zone that would be coming in April. What was not previously known in regards to future DLC and Gear for The Division was the fact that there will be three DLC expansion packs, and two smaller content drops that will add new features to The Dark Zone, along with the aforementioned Incursions. The smaller content drops will be completely free for everyone to download, while the DLC expansion packs will have to be purchased. Although, how much they will cost has not yet been revealed.

Basically what Incursions will be are extra in-game modes that will be PvE. They are difficult, squad based missions for you to complete which will reward you with high end Gear and Weapons. The paid DLC expansion packs however will bring much more to the game, offering a chance to explore the underworld of New York, zig zagging your way through a maze of tunnels as you fight off dangerous foes. The second expansion will be putting you to the test to see how long you can survive, as you gather essential Gear and supplies to take back New York. The third and final DLC expansion pack that was announced will not be available until this Winter, and the description of what it entails is lacking, to say the least. It is just a one sentence snippet, saying that “players and their squad must prepare to defend against a relentless foe.” Which leaves us all wondering what exact kind of foe Ubisoft could be planning on unleashing in the streets of New York that is worthy of its very own DLC. This Year One content will periodically release from April, all the way until Winter of this year.

UPDATE - In other news for The Division that is not in regard to the Season Pass content, Ubisoft has revealed all of the updates and improvements made to the game in the day one patch. The actual size of the update is not yet known, but it will presumably take a decent chunk of hard drive space considering the large number of changes that will be made with this patch. With over six million players participating in the open and closed betas, Ubisoft has received a massive amount of feedback from players with things that seriously needed to be changed. A major one of those things included the deployable turret attacking non-rogue players, or damaging players that simply got in the line of fire. This issue created loads of chaos during the beta, allowing players to exploit it, and turn innocent players into Rogue Agents so that they could steal their Dark Zone loot. Now players can use the deployable turret without worry that it will begin attacking those you don't want it to.

Besides that specific issue, Ubisoft is making many visual upgrades to the game such as improving car window reflections, improved nighttime lighting and contrast, and even all the way down to illuminated signs now casting actual light around them. Furthermore, Ubisoft has made changes that could ultimately improve overall gameplay for the entire game. One of those would be the icon for points of interest in the Dark Zone changing, with them now also indicating whether non-player enemies are present or not. So on one hand this change will essentially wipe out the whole exploring aspect and the need to search certain areas for AI enemies, while it also takes away having to run all over the Dark Zone looking for the right place. All of the changes that are being made to The Division in this day one patch can be viewed here.

Tom Clancy’s The Division is launching in just under ninety-four hours from now on Xbox One, PlayStation 4, and PC. If you’d like a chance to win a 500GB Limited Edition Xbox One console, follow this link to my previous article to find out how!