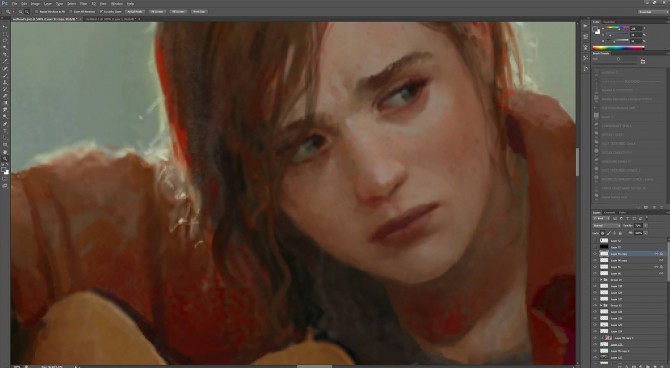 Since three days ago, various teasers have been made to the public, including a strange piece of concept art. Although the initial teaser is somewhat ambiguous, it can be clearly argued that something is coming in the relatively near-future. To narrow the scope, judging by the concept art and the statements, the teasing may be for some sort of future installment for The Last of Us series. The initial tease, made three days ago, came from The Last of Us Game Director, Bruce Straley, in which he was praising a certain piece that a designer was working on.


From his Twitter account, Straley said, “I got goosebumps playing & talking thru a prototype a designer was sketching in yesterday! That's how I know... #GonnaBeAwesome.” Following up, just yesterday, the image that you can see above was posted via FaceBook by a concept artist named Marek Okon. In the past, Okon worked on several aspects of artwork for The Last of Us, and some would imagine that Straley’s Tweet may be referring to this very image. Along with the image, Okon remarked, “let me tease you something… Its coming… ;].” A fair amount of people would agree, the above image seems to portray an older version of Ellie, from The Last of Us, holding a guitar. Interestingly, if you have played through the game, you may recall a conversation between Ellie and Joel discussing guitar lessons. Of course, it is merely an assumption to make the notion that both Straley’s and Okon’s teases are related.


Even if the teases are related, we could all just be taking a shot in the dark. After all, the concept art could be for some sort of graphic novel, comic, or even just a project being carried out solely by Okon. However, judging by Okon’s recent update on Facebook, I would say there is something bigger going on. He wrote, “ Lol. This is how you know you are teasing your stuff the right way[.] So before its gonna get blown out of proportions – its gonna be strictly personal image. Is it about TLOU2? Not really… Maybe… Its classified ;P But seriously its gonna be just fan art ;].” I have reasonable doubt that Okon’s work is merely “fan art.” In fact, if I had to choose, I would say something definitely is in the works at Naughty Dog. The timing seems about right and I don’t see why the aforementioned teases would be unrelated anyways. Keep your eyes and ears open, my fellow Sinners, something awesome may very well be in the making!

UPDATED: Thanks to a notice given to me by Zahard, it was brought to my attention that a good portion of the community considers Okon's "fan art" quote to be serious. Zahard also told me that Naughty Dog has stated that Ellie's story is actually over, and if a new game were to come out, it would be with new characters. Some sources, including my first one below, consider Okon's "fan art" quote to simply be adding to the teaser. At this point, I am not too sure where I stand on the idea.