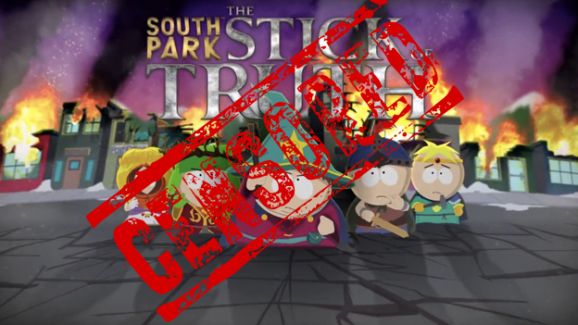 The video game, South Park: The Stick of Truth is set to release for the Xbox 360, PS3, and PC on March 4th, 5th, and 6th this year in NA, AUS, and EU regions respectively. However, certain scenes within the game have recently been censored for Europe and Australia. An Associate Producer of the game has mentioned that content is being removed from the game to avoid a potential "'Hot Coffee' situation."

For those of you who do not know, the 'Hot Coffee' term is a reference to a hidden mini-game that was on certain Grand Theft Auto San Andreas discs. This mini-game involved sexual intercourse between the player's main character and an in-game girlfriend. Such a scene was controversial insofar as it goes beyond the characterization of "suggestive theming." Although the Hot Coffee mini-game caused a good amount of controversy, some would reasonably speculate that the affected content within South Park: The Stick of Truth would cause even more of a stir.

The actual scenes that are affected by the recent censorship are a mini-game in which a doctor is performing an abortion on the player, a second mini-game in which the player performs an abortion on another character, and five anal-probing scenes in which a character within the game is actively being probed. It should be noted, however, that the aforementioned five probing scenes are only affected insofar as the more active sequences of these scenes are being cut from the game, the beginnings and endings of these scenes are reportedly to run as normally intended.

Video games are evidently no stranger to censorship. Throughout generations of video games, there have always been materials deemed too offensive for players. One prime example involves the survival horror title, Manhunt 2 in which the game had to be edited to earn an M-rating by blurring out general executions of enemies and by removing several decapitation scenes from the game because the violence was viewed as too sadistic. Some view censorship as something which protects players' exposure to the obscene. Others see censorship as a limiting of the artistic creativity that belongs to the makers of the video games, thus making the product less original. Going further, some feel there is a middle ground which should be established between both ends of the spectrum.

Personally, I feel when people make a purchase of a video game containing mature content, they normally know what they are getting into, or at least should know. I prefer to play video games and enjoy all forms of entertainment how the creator genuinely intended; I thus have a sort of bias against censorship. Feel free to post your thoughts on the censorship of South Park: The Stick of Truth and on video game censorship in general.