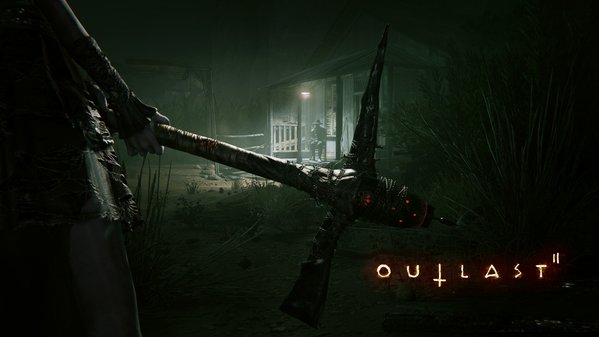 When Red Barrels Games released Outlast in September of 2013, the horror genre fans went crazy. Over 3.5 million gamers took the harrowing journey through Mount Massive Asylum, coming face to face with the violent patients being held within. It's clear from the teaser trailer for Outlast 2 that we will not be seeing the infamous Asylum in this game, which has been confirmed by the developers.

The newly released image has many fans curious. In the background we see a man sitting on the front porch of a small country home, surrounded by overgrowth. At the forefront of the image is what appears to be a female child, judging from the hand and size of the arm and leg shown. The mystery character is wielding a makeshift pickaxe, which has many fans wondering if we will have weapons to defend ourselves this time around. It has not been confirmed that the pickaxe wielding character is the protagonist of the story, so until more information is released we can only speculate.

Although it seems as if the setting will be more open than the cramped, claustrophobic corridors of Mount Massive, the developers have confirmed that hiding will still be a main mechanic in the game, which comes as a relief to fans of the original. Judging by the end of the trailer it seems as if the night vision mechanic will be returning as well, which seems like a good move. This is corroborated by the first new image. Nothing is more terrifying than knowing you're near a crazed murderer and having no way to see them in the darkness.