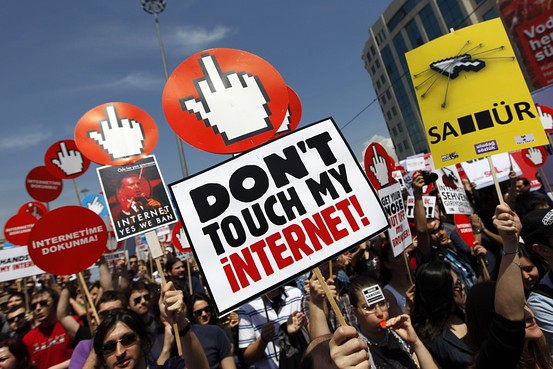 With Internet censorship becoming a reality, some are considering whether or not it is time to look at the events that have been going on around the world. With internet access in Turkey becoming a questionable service in reliability, security, and integrity, it is unclear what will happen in the aftermath of the scandal involving Turkey's Prime Minister and his familiars. Since the scandal came to light, some speculate that there will be a great deal of change brought to Turkey's precedent in such cases as well as an influence on how Internet access will function. Because of a phone call related to the scandal being leaked once again onto YouTube with a supposed False Flag event being talked about, the whole situation isn't looking good. Those speaking on the call were talking about destabilizing a region, which is an archaic sign of gaffe; it resulted in the government's court to issue a take down of the services mentioned. The situation calmed down and it was forgotten by a large amount of people. With internet security and reliability being questioned in this day and age, people across the globe have some reason to consider what could happen to the Internet security and accessibility in their own countries.

This situation is very similar to the Great Firewall China, by which, content on the Internet is censored out and, in a sense, a great deal of information is covered up. This is very damaging to the people of China because they cannot connect to the world around them and learn about it in its earnest being. Why should a government tell you that you cannot read a certain amount of information or something that doesn't serve them?

The governments of the world have been known and found to legally, and illegally, take your information through legal loop holes when you browse websites, use Apps or downloaded content; this is usually through exploits in technology not reported because they're "Top Secret" or for the National Security of our nation (The United States). With techniques to gather your data and put it through processing networks for congregation, it is as easy as a search to find your information and the things you've done across the Internet. You don't have to be a criminal or have committed a certain crime to find yourself being investigated; you don't even need to be suspected of felonious activities. It is collected whenever and any time it can be and routed through their "tax payed for" servers. For example, some claim that collections of gained-information from countries like Turkey, where the internet laws are loose, can be transferred to other nations. To explain, a country such as the United Kingdom (UK) or the US could potentially be given access to such information and use it via establishing a loosely agreed on contract in which information accessibility rules are eased. It's a "I won't look if you don't look, I won't prosecute unless it's brought up if you don't" type of situation that is challenging the idea of International relationships. Not to mention that in the US, when a warrant is issued for someone or their content on a website, the government can collect information on everyone in a server despite them not being yet found guilty of a crime. This goes past the individual on the website, the website and creators content + member content, and takes down the entire server which the company hosting the service to the website has. With all of this in mind, people around the globe may wonder what Internet policies could change in their own country and wonder how much unknown-involvement their government has with the Internet, their information, and the information of others. Well known NSA leaker, Edward Snowden, recently noted, "The deals between the NSA and foreign partners are set up in such a way as to provide the NSA with a means of monitoring a partner's citizens without informing the partner, and to provide the partner with a means of plausible deniability."

Some citations (article not taken from these links, these are headlines)
http://arstechnica.com/tech-policy/...rkish-government-steps-up-twitter-censorship/
http://rt.com/news/turkey-block-youtube-twitter-649/


More on the governments and capabilities, rights stripping and all.

SOURCE 1
SOURCE 2
"Each of these countries received instruction from the NSA, sometimes under the guise of the U.S. Department of Defense and other bodies, on how to degrade the legal protections of their countries' communications," he said. The ultimate result of this NSA guidance is that the right of ordinary citizens to be free from unwarranted interference is degraded, and systems of intrusive mass surveillance are being constructed in secret within otherwise liberal states, he said, adding that this often happens without the full awareness of the public. You do not have to be a criminal or be suspected of criminal activities to be monitored/spied on.

The NSA has been pressuring EU member states to change their laws to enable mass surveillance, according to Snowden. This is done through NSA's Foreign Affairs Division (FAD), he said, adding that lawyers from the NSA and GCHQ work very hard "to search for loopholes in laws and constitutional protections that they can use to justify indiscriminate, dragnet surveillance operations that were at best unwittingly authorized by lawmakers," he said.

In another example, The Intercept included images from an internal NSA slideshow presentation that indicates surveillance missions can be waged by the agency against targeted email addresses, IP addresses and the “cookies” created by websites like Google, Yahoo, YouTube and countless others to track visitors, often for advertisement and user experience purposes.

According to The Intercept, the NSA has escalated offensive cyber operations significantly since 2004 in order to spy on targets, and has used an array of tactics and “implants” that were previously undisclosed in order to carry out these missions.

The website reported that the agency’s British counterpart, the GCHQ, “appears to have played an integral role” with regards to developing these implants, which have grown in number exponentially in recent years from only 100 or so to tens-of-thousands, according to the report.
These implants, the journalists wrote, allow the NSA “to break into targeted computers and to siphon out data from foreign Internet and phone networks.” They can also be combined with a number of specialized plugins to provide analysts with additional surveillance options, the likes of which could likely leave many thinking staying secure on the Web seem impossible after reading the Greenwald and Gallagher report.