With recent anti-piracy acts, there has been doubt amongst the file-sharing community as to where it will head. However, researchers at Delft University of Technology are continually working on a decentralised BitTorrent Network, the Tribler client. Tribler doesn't require any torrent sites for searching and downloading; instead it uses peer-to-peer communication.

The Tribler has been a work in progress for 5 years, so it isn't unknown. It has delivered numerous innovative features, albeit they weren't too popular amongst the community, and were frequently ignored. However the Tribler client's time to surface has finally come, as its importance begins to shine through.

The predominant goal of Tribler is to maintain BitTorrent's presence, without the reliance on central servers. The sole purpose is to keep BitTorrent active, if/when torrent indexes, search engines and trackers are stripped from the Internet. “Our key scientific quest is facilitating unbounded information sharing,” says Dr. Pouwelse, owner of Tribler.“We simply don’t like unreliable servers. With Tribler we have achieved zero-seconds downtime over the past six years, all because we don’t rely on shaky foundations such as DNS, web servers or search portals.”

Tribler works similarly to other BitTorrent clients, it has a search bar at the top. The difference is the results obtained from a search are not received from a central index, but directly from other peers. 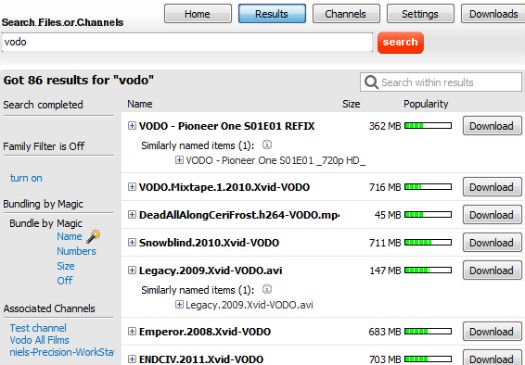 Furthermore, downloading a torrent from Tribler is completely dispersed from away from a central location or authority. The meta-data is pulled from a peer and downloaded instantaneously when a search result is clicked. It uses regular BitTorrent trackers to communicate via peers. It can also continue downloading a torrent when a central server is down. Spam-control is also no issue for Tribler as it uses crowd-sourcing to keep it clean. Certain channels can be approved by users, so the ones with the most approval are boosted in search results, making the more reliable channels easier to find.

Public channels can also be edited via "Open2Edit", allowing users to change titles and descriptions of torrents.

The best thing about Tribler is that it is prone to being taken down, blocked or censors by and laws or censorships. “The only way to take it down is to take The Internet down.” Dr. Pouwelse, Tribler leader, said. The one issue is the capability of finding new peers, however the Tribler team are searching for "bootstraptribler peers", who will act as super peers and distribute lists of active downloaders.

“Together with software bugs and a code cleanup, that is now our last known weakness,” says Pouwelse.

Tribler is available for Windows, Mac OS X and Linux, and can welcomely be downloaded here. Whilst it may still be relatively small in terms of users, this is a massive relief for file-sharers alike, no matter what laws and censorships are thrown at it.