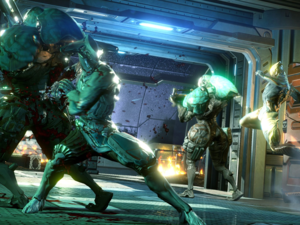 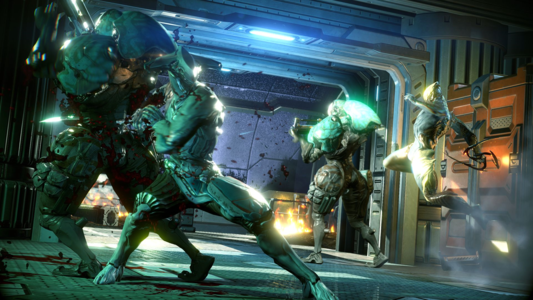 Image from one of Digital Extremes' games, Warframe.
​
Leaks have become a major part of the games industry. Most of the time they happen accidentally or because an employee can’t keep a secret. A recent leak that comes from Digital Extremes, the developers of Warframe, is a bit different though. Someone was able to sneak into their studio and uncover information about an upcoming game.

A Redditor by the name of UndercoverLegend has been a fan of Digital Extremes for quite some time. He was aware that their office is located near him, but he didn’t know the exact address. Yesterday, he finally found out their location and decided to see if he could get in. Surprisingly, he was able to enter the building and blend in without anyone questioning him.

During the designated lunch time, he was able to talk to people who were working on an unannounced project. He learned that Digital Extremes is developing a new game called Keystone. The only thing he was able to tell us is that it's a first person shooter with CCG elements. Unfortunately, there isn’t much more information than that.

Of course, some are lead to believe that this is just a PR stunt. However, a source confirmed these events with a writer at Kotaku. The Digital Extremes community manager also made a forum post asking fans to be "respectful and law-abiding" and reminded them that "Trespassing is never OK."

If you want to read the crazy story UndercoverLegend told, below is the text from the now-deleted Reddit post.

A bit of a back-story: I have been following DE for years now, I knew they were in London, Ontario, Canada but I didnt know where. They have been hiding from us for years, no explanation to as where. I found them. On the corner of [REDACTED] is their office in [REDACTED]. How did I find it? Well if you go high enough there is a Tenno statue! You can clearly see it and where they used to do dev streams from the window. The doors are all opened by fingerprints, pretty cool haha. But I just followed some tattooed dude into the door after he unlocked it. He didnt even ask me any questions. I had my Doctor Who shirt on and I tried my best to blend in.

No one asked me if I worked there, I just sat in the chairs and moved around every now and then. at 12:01pm the lunch lady says that food is ready over the overcom and I join up the line. Theres a bunch of plates stacked and then you just grab the food buffet style. I sat down and enjoyed my free lunch and started talking to some people. They told me they were working on a new game called Keystone. They said it was a FPS with cards (like magic the gathering style perhaps) but didnt explain that much about it. The QA room has funko figures and stuffed animals everywhere. There were also a lot of ps4 and xbox one sitting around unattended. There were no security guards and no one asked me who I was. They just assumed I belonged there and told me about their secret game. at 6pm people started leaving so I just followed them out and the one guy said “See you tomorrow” so I agreed.