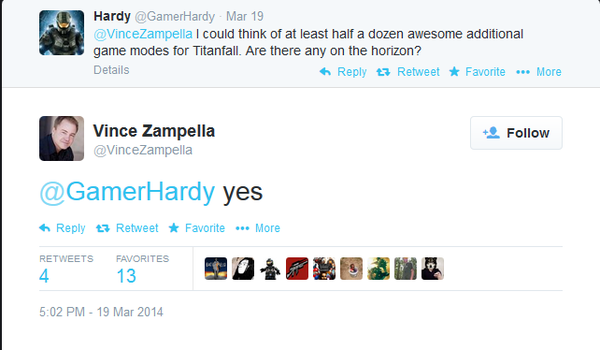 For those of you who thinks Titanfall is getting a bit stale, you'll be pleased to know that the hit new game will have new life breathed into it in the form of new game modes. Currently, there is no set date on these new game modes, but when asked if players would be seeing any new modes in the near future, Respawn's Vince Zampella replied with a simple"yes." No one knows right now what kind of game modes it will include but what we do know is it is getting three waves of expansion packs in the near future.

Currently, Titanfall only includes five game modes. Those being: Attrition, Last Titan Standing, Hardpoint Domination, Capture the Flag, and Pilot Hunter. Most people find the game lacking variety like myself and want more options such as a titan-less game mode. More importantly, how do you feel about Titanfall? Is the game lacking variety, and what kind of game modes would you like to be added? Let us know below.