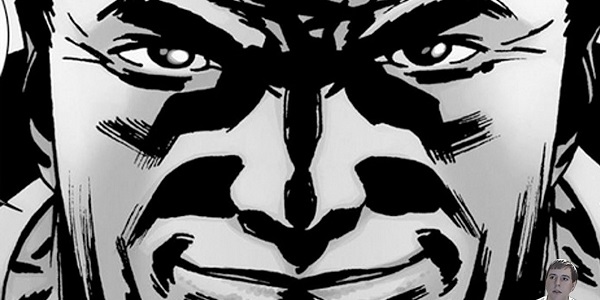 With the upcoming Season 7 premiere of AMC's The Walking Dead only a few weeks away, I figured some of the more hardcore Walking Dead fans can proceed ahead of everyone else and start discussing the content the show is based on, Robert Kirkman's comics. I know quite a few people who watch the show and haven't read the comics and I'll admit, I used to be one of those people. If you're a fan of the television show then trust me, you're going to want to start reading them now. If you'd like to start off where the season finale of season 6 began, start with chapter 100. I won't say much about the appearance of Negan other than after he gives a certain member of Rick's group a headbangin' relationship with Lucille, it triggers some nice badassery from Carl you're not going to want to miss.

Before we get into the latest chapter of the comic that was released, if it isn't obvious enough already there are major spoilers ahead, so stop now if you don't want future episodes possibly ruined. You can read The Walking Dead comics online here if you'd like to catch up.

The chapter begins right after Negan's initial meeting with Alpha, the leader of the Whisperers. After Alpha questions Negan about his past, his former leadership, and other areas of his life, she decides to let him join the Whisperers despite the protests from her second in command, Beta. His heavy distrust spawning from the fact that Negan claimed ignorance that he knew of the existence of their group before he ran into them. Why Alpha didn't share his distrust is beyond me. The fact that she handed a man practically 3 times her size a serrated knife in an attempt to make him earn his keep makes my head explode. At this point, I assumed Negan's intentions with the group was to tell them everything he knew about his extremely brief look around Hilltop while he made his escape. I completely forgot the Whisperers already made their way into Hilltop unnoticed and slaughtered quite a few of Rick's people, which made the clarification of Negan's intentions all the more mysterious.

Negan began his stay with the Whisperers doing basic tasks and labor, such as feeding their livestock, hunting wild animals, collecting firewood, and more. His primary interest was earning one of their "skin suits" which he needed to collect by killing and skinning his own walker. This moment for him to prove himself came when he was attacked from behind by one. After pleading for help, he was hilariously met with a nearly silent "If you are strong, you will survive," by a nearby Whisperer.

After struggling with the walker, Alpha threw him his knife and told him to prove himself. He swiftly killed two walkers back to back and proceeded to gloat in what can't be described as nothing more than a Negan-like manner. Leaving several of the Whisperers impressed by his kills, Negan seemed to have finally earned a bit of respect among his new comrades. While Beta was still uncomfortable with his presence, Alpha seemed more than happy with him, and allowed him to join her for dinner. Thinking this gave him a free pass to sleep near her, Beta told him otherwise and forced him to find a spot on the other side of the camp.

Now this is where things get interesting. I wasn't shocked by this next bit, as the Whisperers have already proven themselves to be some pretty savage people, but it definitely made me wonder how deeply rooted their sick mentality is. It threw me back a bit to Dawn from the television show, and you're about to find out why. 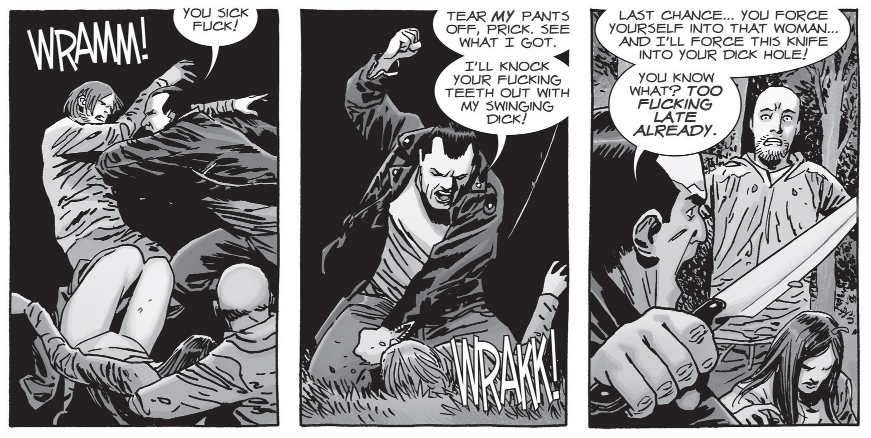 While he was out looking for a place to rest his head, Negan heard a woman screaming for help within the camp and rushed to come to her aid. When he found the source of the screams, he saw two Whisperer men trying to rape a female Whisperer. Negan began attacking them, brutally pounding them and yelling out threats to "force his knife down their d*ck holes."

Just as he was about to do just that, Beta strikes him from behind, and tells him to stand down. Negan was chastised by both Beta and Alpha for not allowing the woman to prove her strength and the simple right to defend herself. Negan, audibly angered by their disgusting and nonsensical train of thought, was sent off to go sleep in solitude. It's pretty odd to live in a society where if a woman couldn't defend herself against two grown men she was weak, and that makes me wonder not only how combat-capable the female Whisperers are, but Alpha herself.

Concerned about Negan's latest round of actions, Alpha confronts him, and expressed her admiration for him, but she addressed the fact that she's been growing increasingly perturbed by his nature since the day she met him. Negan goes on to tell her that he feels as if the Whisperers are all sick in the head, and while he's not wrong, that just seems odd coming from him. While Negan has been proven to display morals, he also has an extremely fearsome and violent nature. He can snap in a second and can end your life before you even realize he's your enemy, something Rick may fall victim to in the near future. Negan is a master manipulator and the way Robert Kirkman portrays him is perfect. I can only hope his unstable and quirky nature is acted out perfectly during season 7.

As the conversation continues, both Negan and Alpha share their differing opinions on what it takes to survive in this new world the undead apocalypse has created. Negan believes people should stick together and protect those considered weak. Alpha believes humans need to return to their basic primal instincts in order to survive. She considered the attempted r*** to be a basic act of nature in her ideal world where only the strong survive. It was at this moment Alpha turned her back to Negan and began crying. Negan called her out on her bull and said she wouldn't survive in the position she's in without Beta protecting her life, adamant she's not able to function as a leader without him. Alpha begins to break down further, finally admitting she's not as strong on the inside as she claims to be. She puts on a front to ensure the rest of her people look up to her as a fearsome, cold-hearted leader who cast out her own daughter because she considered her weak.

Negan admitted that while he may appear cold and heartless, any action he takes that one may consider gruesome is all for the greater good in his opinion. The death of someone close to him before the undead outbreak happened broke him and turned him emotionless. While he admits to his real nature, he claims he'd never hurt someone just to get pleasure from their pain, which is something I have some serious trouble believing. In his head, every person he's mutilated with his iron or splattered with Lucille was done for a reason. While to an outsider it may seem like he's just playing some sick game, Negan has a goal in mind. While most of the time it's done to establish dominance, force loyalty, and fear among those around him, each bit of violence serves a purpose to him all the same. In a way, Alpha's ideals seem similar, with her end goal simply being proving you can handle yourself no matter what situation you may face.

The conversation between the two comes to a close, with Negan finally getting Alpha to accept that pretending to be something she's not is no way to live. She tells Negan that he just may have a place among the Whisperers, alluding to the fact that she accepted his ideals and will implement them to change her people. Possibly leading to them having a peaceful nature. While it would have been interesting to see what kind of tension this would have caused between the sudden changes Alpha would have made to the Whisperers, and Beta not accepting Negan's corruption of the group; unfortunately none of this is going to happen, because literally right after this Negan slits her throat and hacks her head clean off.

The chapter ends with Negan holding Alpha's bloody severed head and saying "Wait until Rick gets a look at you." This ending left me in complete shock, because like most of the fans, I was expecting Alpha and Negan to begin a relationship together and eventually storm Hilltop in some sort of epic war. Robert took this in a whole new direction, and I guess an unpredictable story can be a bit of a good thing. It's going to be interesting to see what the next chapter holds to say the least. There's just so many possibilities. Due to the Whisperers policies, anyone can challenge Alpha or Beta to combat to take their positions. Negan may return to the camp to claim his new throne, but I just don't see Beta having any of that. Maybe the Whisperers will turn on Beta and kill him? Then there's the fact that Negan would simply escape under the cover of the darkness, and return to Hilltop, gaining Rick's trust by delivering him the head of Alpha. What Negan's end goal here is completely unclear, and can go a variety of ways. Whatever's going on in his head I'm excited to see, and I'm beyond pumped for next month's chapter.
About author