The Talos Principle And Friendly DRM

If you enjoy solving puzzles upon puzzles and pondering the meaning of life while you're contemplating why you even exist, then The Talos Principle, developed by Croteam (the developers of Serious Sam), is definitely something you should play. Not just for it's puzzles, but the wonderful things that Croteam has brought us in the past. Boo hoo why is he mentioning DRM all of a sudden? Don't you worry, that's the best part of what we're taking a look at, and enjoying today. However, before we get into the DRM side of this game, let's talk a little bit about the game itself.

The Talos Principle has a very familiar Portal type of feel. Mainly because of the complicated, head scratching puzzles that you need to solve. You're goal is to collect the tetromino puzzle piece in the gated area of the map, surrounded by sentry guns, enemy patrols force-fields, you know, the works (already sounding pretty interesting, if you ask me!). Through out the puzzle, there is a interesting assortment of tools that can be used in order to work towards solving the puzzle, such as reflective crystals, pressure plates, toggle-able force fields, and more (hello Portal nostalgia). Now you're probably thinking this is just another Portal game with a fancy name and cutesy enemies. It's definitely not. While Portal's puzzles where mind boggling at some points, in its entirety the puzzles where nothing that couldn't be eventually solved with trail and error. However, as you progress through The Talos Principle, you'll see that some of these puzzles will make you turn your PC off and cry in the corner. 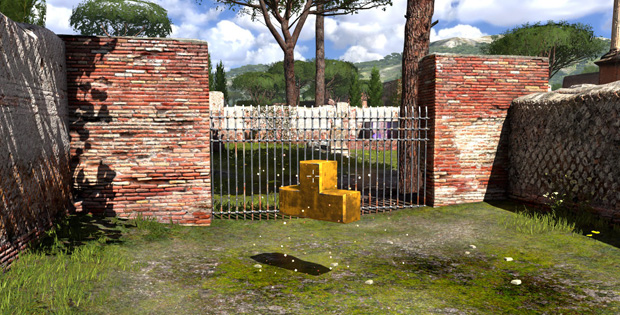 [Tetromino Puzzle Piece]
​
But why are we collecting all of these tetromino puzzle pieces anyways? Simple - they're used in order to upgrade your tools; make you a better puzzle-solver. This toolkit includes the aforementioned tools that you must use in order to solve these puzzles. However, the tetromino puzzle pieces are not the only thing for you to venture towards. There is literally (inside of the game) another world outside of the one you're exploring. Information about this world is available inside of the game through Library Terminals (somewhat like Halo Terminals). These terminals are accompanied by an AI Library Assistant that poses questions about what you find inside of these terminals. Wondering what is inside of these terminals? Well information about that outside world I just mentioned, silly! They're filled with fictional blog posts, emails, readings (literature) as well as philosophical concepts to take into consideration as you play. I hope you're nothing expecting this material to be boring, as it's quite intriguing and will actually make you think about what's going on in the game, and maybe even in real life. There's definitely a significant personality behind the game. But what are we really trying to achieve? It'd be no fun if I was to spoil it here! You'll have to dive into these puzzles and figure it out for yourselves. What's a puzzle good for, if you already have the answer? 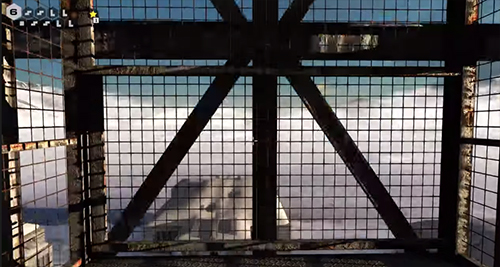 [The Elevator]​
Remember I said something when you started reading this regarding DRM (Digital Rights Management)? Well, have no fear! The Talos Principle, developed by Croteam haven't fallen sort of the tomfoolery we love them for. If you're wondering what that picture of "The Elevator" is all about, we'll get to it in a second. First I want you guys that have played Serious Sam 3 to think about the Anti-piracy measure that was included inside of the game. Can't remember? I'm sure the pirates are familiar with the tale of the Immortal Scorpion. Let's take a look, shall we?

Croteam you sly dogs you! The pirates won't be able to make it back to their ship if there is a super fast scorpion chasing them. However, if those pirates do break free and make their way to The Talos Principle, they better hope they brought a blanket. Originally surfacing on the Steam forums, one member posted about all of the elevators in his game not working, and couldn't figure out why. I'm sure you can figure it out now though, why his elevators stopped working! Yessir, this time Croteam has capture the puzzle solving pirates. When playing a pirated copy of The Talos Principle, at some point throughout the game, you will encounter the need to use elevators in order to progress. However, you can't progress if those elevators suddenly shut off, right? Right! Aside from he elevators stopping, there's a goofy easter egg inside of the elevator. If you find yourself inside one of these elevators, grab your QR Scanner, and check out what those QR's say (image included below)! 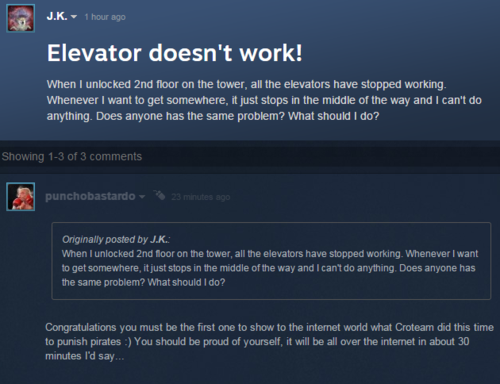 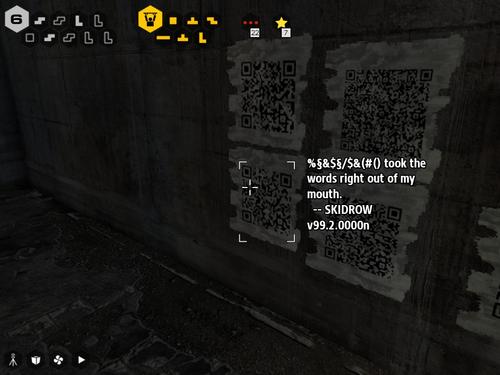 [Source: neogaf]​
Croteam's The Talos Principle has definitely caught my interest, and I'm sure you're probably a bit interested to see what these puzzles are like, or maybe you just want to play with the funny DRM put in place by Croteam. But it makes you wonder, is it wrong for developers to put little things like this in their games to prevent piracy? I think it's pretty fair and pretty hilarious. There are a few instances of DRM like this where the developers are messing with the players. Such as Crytek in Crysis Warhead with their super powerful...chicken bullets!


​
PC gaming has definitely become a hilarious place to be. From life ruining puzzles to shooting chickens out of your gun. What a wonderful world to explore! What do you guys think about The Talos Principle as a game, and the funny DRM they've included? Let us know in the comments below! The Talos Principle is viable on Steam for $40.00, and also available on PS4.