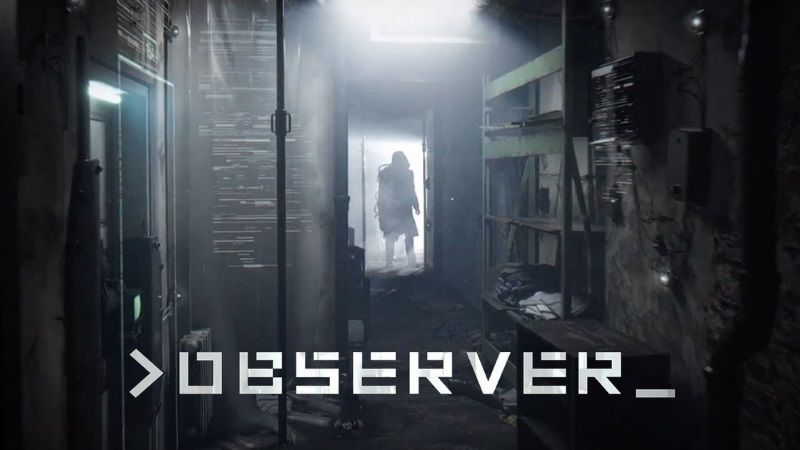 What would happen if you were to throw the horror aspects of SOMA, the visual beauty of Mirror's Edge, the cyberpunk aspect of the movie Ghost In The Shell, and twists of The Matrix? Well, what you would taste might pleasantly surprise you. I can tell you personally that it tastes very good! The aftertaste is a bit lacking however. The Observer is the concoction presented from that aforementioned hypothetical blender. From the creators of Layers of Fear, The Observer is a cyberpunk horror game that focuses on exploration and toying with your mind. I recently got my hands on the game and was able to take an afternoon and play the game. Here are my observations as well as my final thoughts on the game.

Right off the bat, there may be potential spoilers so beware. The Observer is based on a time period 70 years from now, and the visual world appears to not only has futuristic implications, but remnants and artifacts from the current world to give the player a sense of new transition in the gritty technological world that hasn't yet become perfect. The scenery graciously depicts the dirty cyberpunk theme and gives off a creepy, yet interesting, vibe which I love. Lately I've been looking for a good sci-fi horror game that primarily takes place in space, but when I saw the trailer for this, it seemed like it was sufficient. I remember seeing the teaser in 2016 but was left with few details to understand what the game was about and never touched base with it until I bought it.

So onto the important details! Playthrough time for me was around 2-3 hours. Yes, it is very short but there is a little more exploring that I could have done and one other side quest, but I would say 4 hours is the maximum play time for a single run through this game. Although it is short, the quality of work never decreased and I felt indulged for every second. The plot seemed very dull and forced and wasn't necessarily impressed with the storytelling. There wasn't enough depth with any of the side characters and it all felt boring in terms of the plot. There is a lack of backstory until the end of the game when it gets really weird, and it makes it hard to piece together the story. But, the basic story without any spoilers is that you play Dan Lazarski, an Observer that is looking for his son, Adam. Pretty basic with a couple twists, but that's pretty much it. An Observer is essentially a detective that investigates your mind and gathers information from it by infiltrating your memories. This is where the gameplay mechanic comes into play. Using implants you can switch between two viewing modes, one for genetic data and another for electronic data. These modes help you extract information and progress through the game.

The interaction between other people is limited to one person, a robot, and a whole lot of screens with eyeballs. Yes eyeballs. The main NPC is an apartment owner who you use as information and a way to access other parts of the apartment complex. The actual apartment complex is surprisingly complex and has many levels, which can easily get you lost. The world is fully explorable and allows you to choose your mission at will and pursue leads when you want to. This means that if you progress to a certain point, whatever you missed when you were able to explore is gone. It is important to check every corner as certain items and functions are well hidden from the player. The world is also dynamic. The player can trigger certain events that change the aesthetics of the environment or the world completely. The level design is by far the best thing about the game. The design of each level is crafted especially to make you feel cramped and alone and does it perfectly. Throughout the world, what looks like data and code are projected by holograms all over the world as well as the level design and make it feel almost like the movie Tron with all the blue lights. The textures are detailed and everything flowed very nicely. It was certainly one of the best games that I have ever played, visually.

Now lets discuss the part that really irritates me, well there are two main things that annoy me with this game in particular. The first problem is the horror aspect. In SOMA, you avoided enemies and monsters by outsmarting them in your movement. Same thing applies to The Observer. The gameplay does not initiate until at the very end of the game. The horror aspect of the first part is mainly audio cues and certain visuals that don't really catch you off guard or scare you in the least. The game is much more subtle in it's scares early on, and even later on it's not that scary except for certain audio placements. The reason why SOMA was scarier was because of the story you read, not play. The text files round Pathos-II really sealed the deal for me. Meanwhile, in The Observer, the text files aren't that disturbing or scary and merely provide information about the person that you just met. The reason why I related SOMA to The Observer is because both games deal with subjects relating to the mind, technology, and ethics to some degree. Both games have similar topics, thus resulting in me relating them. The other major thing that frustrated me was the end game, the story fell apart completely and felt rushed, or even comical. I was left with a feeling of, complete emptiness and confusion. The early story, wasn't good, but it got increasingly worse as it went on. The only thing that kept me playing were the visuals and soundtrack. If you have ever seen The Matrix and loved the beginning of it, but then got to the end and was like, "why did they have to add so much unnecessary plot items?", well that's The Observer in a nutshell.

The gameplay is pretty basic, no items to use, no inventory, no weapons, it's essentially a "walking simulator". Although who knew walking around could be so hard? Some puzzles are quite difficult and frustrating after a while, but eventually doable. Doors are opened by moving your mouse, making it feel like naturally opening a door. The most important part of the game and the story is that you can link your digital mind with others, then enter their dreams or more specifically, their nightmares, to extract information. Now when you do this, you are not playing as the Observer anymore, instead you are playing as the person whose mind you have taken over. This is the main part where the "horror" comes into play, but it still is nonetheless the most interesting part, thankfully too, because it's the main gameplay feature. When you enter into someone else's mind you have to pay attention to everything, and I mean everything. Every little detail helps you figure out what's going on and helps you understand what that person was like and their situation. Some elements that are implemented are very clever and can make you think. Eventually you can piece together the information from the real world as well as the digital world to figure out what is going on in the apartment complex. Overall the gameplay mechanics are quite smart, intuitive, and provide a fun experience. The downside is that unless you really want to think about what's going on, you may not want to be playing this.

Overall, if I were you I would ask myself one essential question before purchasing The Observer. Do I want to critically think about the storyline and how it affects me as the player? This game will make you think. Even after playing you will think long and hard about what happened and why it happened. One other thing I forgot to mention, the voice acting is superb, the main character reminds me of Clint Eastwood. The other voice acting isn't half bad either, it is very well thought out and gave me chills down my spine. So as a general answer, I would say yes, buy the game, get indulged in the atmosphere and take the story with a grain of salt. The game, in my opinion, should be priced higher. So what you get for the price is essentially a steal. I hope you enjoyed my review and take consideration into your purchase!
About author