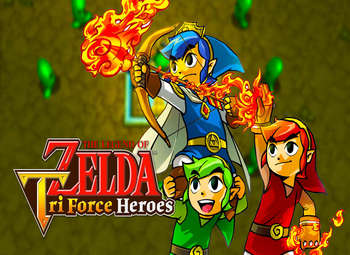 Announced at E3 2015 in June, Tri Force Heroes is a multiplayer game in which up to three players each as the character Link, play cooperatively by making their way through intricate dungeons to battle iconic bosses. Utilizing the new Totem mechanic, players are able to stack three Links on top of one another to reach higher grounds, which in turn brings about complicated riddles, and the gathering of plunder to create wearable outfits, each with an alternate boost or ability. Every rendition of Link can equip diverse weapons and extraordinary outfits that give unique power, for example, some can provide additional hearts or boost archery abilities.

Although the game is focused on playing cooperatively with other players, Nintendo has taken into consideration that not all players want to play with others. So, they've made AI friendlies available to compensate a missing friend, or to simply play offline as they're pretty much in the same class as any companion/player would be. Players will be able to browse an arrangement of emoticons to correspond with one another while playing in multiplayer mode. Also, being able to group up with two different players by means of a local wireless connection, online, and with download-to-play.

Here's a video that was showcased at E3 earlier this year.