It's that time of year again. Apple are ready, once more, to announce the next big product ready to hit the shelves, the iPad 3. But what makes this one different?

Well first and foremost, Apple have finally decided to change the iPad's screen. 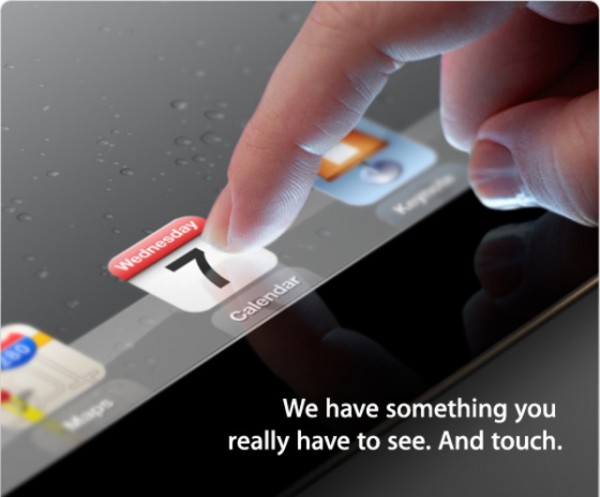 As seen above, the image is zoomed and we can tell that the display is very high in resolution. But above that, something most were not anticipating, is the removal of a home screen button. It is a misconception to think that the device is in landscape mode judging by the positioning of the applications at the bottom of the display.

When the iOS device is in landscape the applications are spread out along the dock to accommodate for the additional spacing. With this addition the return of the home screen button looks rather slim. If the assumptions from the picture are accurate perhaps the iPad would be usable on all four sides, thus removing the purpose of a home screen button locked to one particular side.

Playing with Apple's tease "We have something you really have to see. And touch." we can only assume that more touch-screen interactivity has been incorporated into the device, ergo the assumption that the home screen button would be touch sensitive, or completely removed.

We can't be entirely sure as of yet, merely speculate, but we'll find out soon enough as Apple are planning to unveil the iPad to the public next week. If Apple is doing away with the home screen button, what can we expect for the iPhone 5?

Will you be getting the iPad 3?