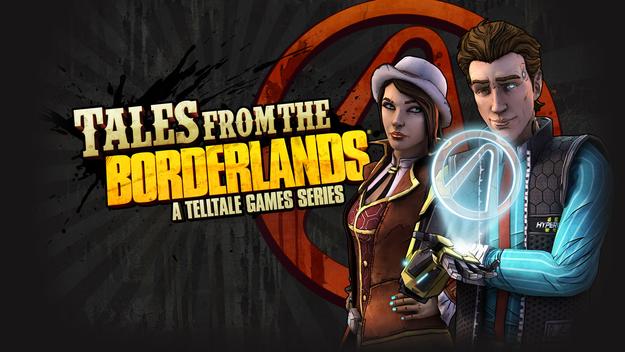 Telltale Games is best known for their success with the zombie-apocalyptic The Walking Dead and the big city adventures of The Wolf Among Us. It can be easy to forget that they once made a living of making funny games consisting of talking bunnies, time travellers and silly pirates in episodic games like Sam and Max: The Devils Playhouse, Back to the Future: The Game and Tales of Monkey Island. There has not been a lot of fun and laughs from them lately, but it is definitely back now. The first of five episodes of their latest release, made in cooperation with Gearbox and 2K games is called Tales from the Borderlands, and has lot and lot of it. Episode 1: Zer0 Sum was released on the 25th of November on Xbox One, Xbox 360 and PC as well as on Playstation 3 and 4 in the US. It will be released on PS 3 and 4 in the rest of the world soon, and is also scheduled to be available on Android/IOS in the future. No dates are set for these yet. It will cost you $5 for the episode and/or $25 for the season pass.

So let's take a quick look at this first episode: Tales of the Borderlands is of course made in the same successful mold Telltale has become so known for, and thereby differs from all the previous games in the Borderlands franchise. Coming from the action filled shoot and loot genre that focus on running around completing quests, killing whatever moves and the endless hunt for better loot, this game is set up quite differently. What they have in common are the graphics, the sense of humor and most importantly, the story. The story takes place after Borderlands 2 and aims to give players some more information regarding what did and did not happen on Pandora that we still don’t know the details about. It is a totally new game with new main characters, and even though people with knowledge of the Borderlands universe will have a few treats incoming, there is no need to have played any of the previous titles to enjoy this game. 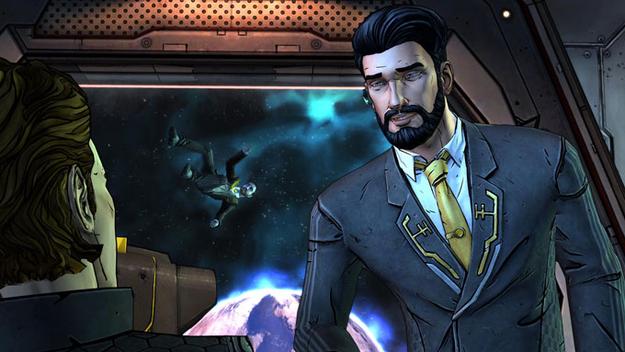 First we meet Rhys. He is a Hyperion employee, working hard to climb the corporate ladder. And he is just about to discover that licking his boss's backside just won't cut it any longer, as said boss currently is floating around dead in space, right outside the window of his old office. He is replaced with a person you hate, deeming the before mentioned strategy rather unpleasant. Not that Rhys is the friendliest person himself, but he possesses a certain charm and there is definitely something about him. His hair is slicked back, he is wearing the company suit, rocking a few cyborg traits and makes for an interesting character to get to know. And what we find is a somewhat wimpy daredevil, a little haughty and a little awkward, fitting those Hyperion shoes pretty well. No matter how hard we try though, he will keep making a complete fool out of himself, this is the Borderlands after all. Further into the game, you get to play as a second character, Fiona. Like Rhys, she is ruthless and selfish with a taste for profit and easy money. Originating from the streets of Pandora she has different tactics of reaching some of the same goals Rhys has, but it is the street smarts she bases her decisions on, not relying on a big company saving her when she is in a pinch. They might seem like a good match, but then again that might not be the case. You will also see several familiar faces if you ever played a Borderlands game, but you do not interact with them much. I must admit I found several of their appearances pretty amusing though.

The game work like most Telltale games, meaning you walk around a little while the story unfolds around you, you mash some buttons now and then and there are a few dialogue options from time to time. These are supposed to change the way the game unfolds, but I don’t think any of the choices could change the fact that things go from bad to worse fast. Apart from the usual rigidity in character movement, game mechanics are just like we expect them to be in these games. It all fits the genre well, and there is nothing new to be found here. 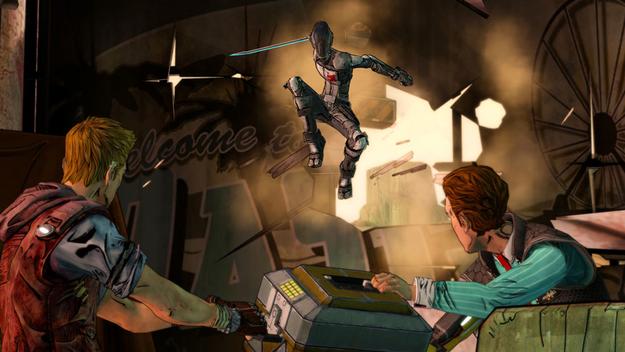 Thanks to the introduction of Fiona who shows up well into the episode, we get to see the story from two different angles, something that gives an interesting second perspective on events we just experienced and adds to the storyline quite a bit. I would say it is a good choice by the developers and a little different than what we are used to see. It is evident that Telltale enjoyed the freedom the Borderlands universe brings to the table, the story is told in a playful way and some of the Gearbox madness is definitely applied. This is nothing but good, and saves the game from monotony more than once. It would simply not work without.

You are supposed to affect he story by making choices in the dialogue, but that might not really happen in in such a degree as you might think. Now on my second playthrough, I noticed that even though the option I selected differ greatly, I can’t really see much of a difference in the game. But to be honest, I don’t really care a whole lot about that because of the silliness this game is wrapped in. The differences in your decisions vary a great deal, and take you on some detours that make you go “Hey, that is not what happened at all” before the game reels it back in on track, and moves forward on the path you saw in your last playthrough. All of this madness is displayed in the familiar Telltale style, sharp edges, soft colors and a cartoony look that fits the Borderlands exceptionally well. The visual mix is almost so well made that you could believe it is what brought the two brands into cooperation. It looks very good, even if you will find some small bugs here and there if you look really closely.

Telltale knows their storytelling, and they know it well. They have definitely found a niche and a style that fits them and with a story like this, well made and with interesting characters in a universe so vibrant as this I can’t find much to complain about. You will have some lag when the game saves, but apart from that these two first hours of the Tales from the Borderlands is an exciting and fun experience. Considering what it is based on, you get what you expect: lots of Borderlands humor with a Telltale twist, never boring, quite amusing and with an interesting story especially for people familiar with Gearbox’s Borderlands universe. This game is like a breath of fresh air compared with the more dark and serious later titles from Telltale. If the next 4 episodes keep the same standard, I would say it is definitely worth some more of my time. I honestly can’t wait for the next episode.