SUPERHOT: The Most Innovative Shooter I've Played in Years 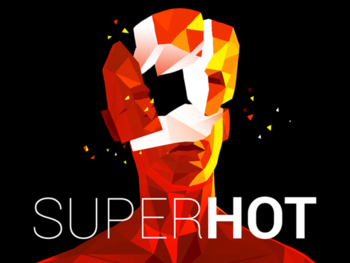 ​
SUPERHOT started as a small indie game jam project back in 2013. After winning the developer showcase award they shortly released the early game build to the public. Little did they know that this unique FPS would be an internet sensation. After years of anticipation, the full version of SUPERHOT has been released with new levels, new modes, and a storyline. Unsurprisingly, the game is incredibly fun to play.

The FPS aspects of the game are fairly simple. There are three different guns in the game: the shotgun, the pistol, and the assault rifle. All of these guns shoot like you would expect and have different advantages and disadvantages. In addition to the firearms there are also a variety of different objects around maps that can be used as weapons. Some items, such as a katana or baseball bat, can be picked up and used as a melee weapon. There are also more simple items, like bottles or phones, that can be used to throw at enemies to get them to drop their weapon. If you are in a situation where you can’t find a weapon, using your fists is always an option. Your first punch will always knock a weapon out of an enemy's hands, but it takes about three punches to successfully kill them.

The core mechanic that really defines SUPERHOT is the way time is interwoven with your movement. When standing still, time is moving extremely slow, but it speeds up to real time once you start moving. This sounds like a fairly simple mechanic, but when it is mixed with a action-packed FPS, it allows for some truly awesome moments to happen. It allows you to dodge, slice, or hit bullets in midair which creates some awesome matrix-esque moments. Time can also be manipulated to quickly move around the map and sneak up on enemies. Once you are close enough, you can throw an object or use your fists to knock an npc’s weapon in the air. Since time is moving slowly, you can easily snatch it from the air and use it against them.

As if being able to manipulate time wasn’t cool enough, you also have the ability to hot switch into unsuspecting enemies. This allows you to take control over their body, which is very useful when you want to get out of sticky situations or gain an advantageous position. It’s hard to describe just how awesome some in-game moments can be, so I highly recommend checking out community replays on KILLSTAGRAM.


An awesome KILLSTAGRAM replay with a katana. ​

One the most surprising things about SUPERHOT was the immersive story mode. Coming from a gameplay-centric technical demo, I didn’t expect SUPERHOT to have a deep story. I, however, was dead wrong. SUPERHOT’s campaign is relatively short, but it has a very interesting story behind it. Unfortunately, not much can be said about it since it is only about 2-3 hours long and part of the experience is your mind getting blown. What I can say is that SUPERHOT is about a cracked game, called superhot.exe, that a friend sends to you over the internet. As you play the game, you start to learn more about the story behind the game and the purpose it serves. Luckily, even after beating the campaign there are plenty of story-related secrets within virtual filesystems and chat rooms that are accessed from the game’s DOS-esque menu.

One of the things that really supports the narrative of the game is the interesting art style. Since you are playing a cracked game, you will occasionally come across intentionally funky game behavior and artificial glitches. All of the dialogue that takes place in the game is done through virtual chatrooms similar to IRC. Unfortunately, I can’t really explain much further without ruining the plot, but there is no doubt that the art-style of the game has a big impact on the overall atmosphere of the game. 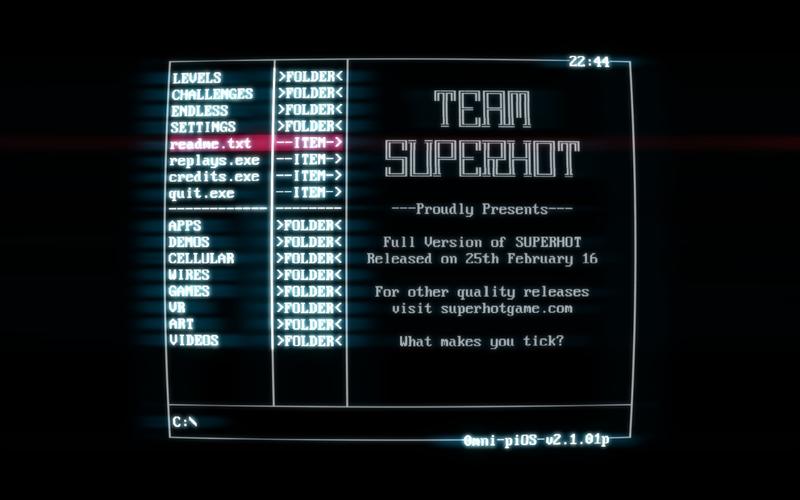 The main menu of SUPERHOT​
In addition to the campaign, there are also two alternative game modes. The first of which is an endless mode which is fairly self explanatory. In endless mode, you are met with an endless wave of mobs and your objective is to kill as many men as possible. More endless levels can be unlocked by getting a certain amount of total kills or a specific amount of kills on a previous level. There are a whack ton of different levels to choose from and the each play out differently each time, so there is a lot of replay value within this mode. The other game mode is challenge mode. Challenges have you replay the campaign except it has some different rules. For instance, there is one challenge where you can only use your hands and there is another that only equips you with a katana. While you would think replaying old missions would be boring, each challenge really changes the way you approach a level and it can completely change the feel of the game.

Considering the gameplay was solid back in 2013, it’s no surprise that SUPERHOT performs very well from a technical standpoint. The only real issue I’ve come across so far is that sometimes the melee range seems to be a bit inconsistent. For instance, sometimes it takes two swings from the same place to land a hit. This is really a nitpick and is only noticeable during melee only challenges. The game is also lacking some typical graphical settings that you would expect to see in any PC game. That being said, the game performs really well and there isn’t much of a need for graphics tweaking due to the game's art style. The game’s overall quality makes it a very enjoyable game, and while you can certainly get frustrated at a challenging game like SUPERHOT, the game itself is almost never at fault.

SUPERHOT is a game that many people, myself included, have been waiting for since the initial tech demo released. Fortunately, the developers certainly met the high expectations of many gamers, and for that reason I would definitely consider SUPERHOT to be one of best and most innovative shooters I’ve played in years. For the MSRP of $25, this game truly is something that should be in everyone’s library.
About author