SUPERHOT: An Incredibly Unique FPS That Has Already Raised $100,000 In One Day 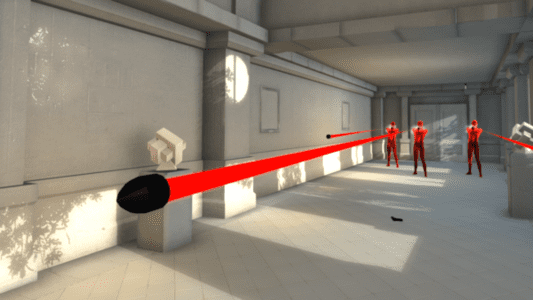 Nowadays, first person shooters seem to follow the same formula and be a bit repetitive. The developers of the upcoming game SUPERHOT has gone outside the box and presents us with a whole new twist to the FPS genre; time will only move as fast as you are moving, meaning if you stop, so will time.

SUPERHOT first started as an entry in the 7 Day First Person Shooter game jam. Shortly after winning the Developer Showcase award, the developers decided to release their initial build to the public. Not too long after the release, the game was quickly spreading among gamers via YouTube and the press. With the support of the growing fanbase, the game got ‘Greenlighted’ on Steam within one weekend. Since then, the team has started to completely remake the game from scratch, allowing more expandability to the game.

In order to fund their new development process, the developers turned to Kickstarter to crowd fund their game. Yesterday, on May 14th, the developers put up their campaign and posted a goal of $100,000. Within 24 hours, the game did not only surpass it’s original goal, but it also generated enough funds to reach their first stretch goal of $120,000. The campaign includes pledge rewards ranging from a simple $14 pre-order all the way to “a mysterious item that is connected to the game's world” priced at $10,000. Purchasing one of these packages does not only get you cool stuff, but it also greatly helps the team and the quality of the game.

The money being raised on the kickstarter will not go to waste, and will directly impact the features and quality of the game. The first $100,000 will be going towards the basics needed for the development of a game, such as hardware, licenses and employees. After the initial goal, they have three specific stretch goals posted on their kickstarter page. The first stretch goal of $120,000 will allow better animations in the game via an additional 3D animator. The next stretch goal of $150,000 will allow a speed run mode to be added in the game, creating a new competitive and challenging element into the game. The final stretch goal they have posted on their kickstarter is $200,000 and upon reaching this goal they will add in a real time (meaning no pauses/slow downs) replay function.

It’s clear the developers and fans both have high hopes for this game. If the funding continues to go like it has already, you can expect all the stretch goals to be blown away by the funding. The real question is whether or not the game can live up to all the hype. The developers plan to add a story, better visuals, more weapons, VR support, and many more features. While all this sounds fantastic, will the developers be able to fulfill their primary goal of delivering “a great, unforgettable game”?