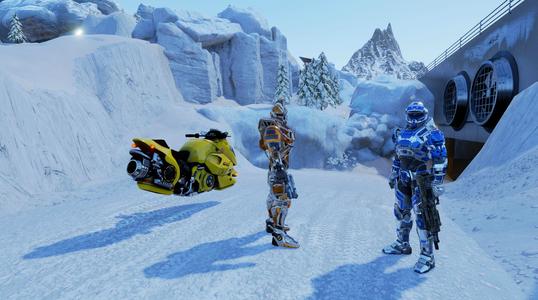 The first-person shooter genre has become one of the most dominant genres in gaming. There are thousands of FPS games for gamers to choose from. Some of which have made an impact on the gaming industry, while others sadly follow the same-old formula which results in a lackluster experience. Now we all know plenty about the lackluster titles, so I’m going to introduce you to a game that aims to break outside of the formula and bring a unique experience to gamers. This game is called Storm United. Storm United is a free-to-play, Unreal Engine-based, first-person shooter being developed by the new and ambitious studio, PixelBeam.

Now I know what already has you worried, hearing the words “free-to-play”. I’ll admit it, I’m generally not a fan of free-to-play games either considering most of them are pay-to-win, but we have to remember not every F2P is P2W. In a recent interview with PixelBeam, they explained that they plan to “monetise 'around' the game as opposed to directly target gameplay elements that provide an advantage over 'free players'.” They then went on to say that they hope to have a monetization platform similar to that of Team Fortress 2 by offering skins, camos, toys, and various unadvantageous items for money. They did also mention that XP boosts will be available, but almost every game-changing item can be unlocked for free without the need of an unfair amount of grinding. So yes, the game will have microtransactions, but PixelBeam wants none of them to be game breaking. Now with that out of the way, I’ll continue on to the gameplay and various mechanics of the game.

The game will feature four playable classes for every player to choose from. The first class is the assault class, which is described to be the “perfect class to start with.” The assault class is generally equipped with large weaponry that can deliver devastating damage. While the assault class doesn’t have a specific skillset, the players who choose assault can help practically any other player due to their brutish play-style. If you want to play with some cool gadgets, then the next class, titled engineer, may be for you. The engineer has the ability to equip themselves with a turret. As the engineer gains levels, they have even more gear at their disposal, such as more advanced turrets, robots, and drones. The gear available to the engineer is extremely critical to many different in-game objectives, which makes it a necessity to have a good engineer on every team. Much like the engineer class the next class, shadow, has a lot of cool tech at their disposable. However the shadow equipment is more focused on stealth with holographic decoys, intel radars, invisibility clones, and more gadgets available to use. The shadow class also specializes in advanced weaponry and has the skill to use powerful sniper rifles. The shadow class has the potential to be extremely deadly, but it takes practice to master the stealth and range skills needed. Finally, we have the medic. As the name suggests, the medic’s main purpose is to provide medical support to their team. The medic is equipped with various healing tools that can be used at either short or long range. While the medic doesn’t always fight directly on the battlefield, they are extremely important to every team as they are the difference between life and death. Whether you want to fight like a juggernaut in the middle of the battlefield, or sit back and support your team, there is a class for you. Each of the four classes have their own unique abilities and all serve an important purpose to every team.

Considering Storm United is more of a tactical game, teamwork is very important in Storm United One of the game’s main features is the ability to be a part of a clan. Every clan in the game has their own clan map which is accessible by all members. The clan map is a persistent map that can be used to socialize, strategize, and customize. The clan map will be accessible in many different ways, including mobile devices and web. Through every device, you can interact with the clan map in a similar way you interact with maps in top-down RTS games like StarCraft. While the clan map provides a home for all your clan members, your clan extends much further in the game.

Storm United will feature a wide array of game modes and maps to play on with your clan. Out of the seven planned game modes, six of them require you to work with your clan and/or team to win the match. The seven game modes announced are Freeze Tag, in which you can freeze enemies and unfreeze teammates; Operation, which requires each team to accomplish different objectives that vary per map; Outpost, which has both teams scrambling to build a structure by scavenging different parts across the map; Demolition, which is similar to call of duty’s demolition gametype; Capture The Flag, which is rather self explanatory, Team Deathmatch, in which two teams just focus on killing each other; and Deathmatch, which calls players to rely on self-skill rather than teamwork. Across all the gamemodes, games can range from 2v2 to 16v16. Larger matches are also a possibility, but PixelBeam feels that 64 players in one game leads to chaos and doesn’t require tactical teamwork. In some of the game modes, there will also be plenty of vehicles to choose from. Currently they are working on both land and air vehicles, and already have a prototype of a warthog-inspired car created.

If playing in public player-versus-player matches isn’t your thing, don’t worry because there will be plenty more for you to do. PixelBeam will be offering anyone the ability to rent their own private server. Additionally, once PixelBeam is satisfied with the multiplayer aspect of their game, they also plan to implement a co-op mode through future DLC. There will also be plenty of community events and challenges to keep you entertained throughout the game.

Right now there is no specific date on when the game is set to release. PixelBeam hopes to have an early version of the game on Steam Early access before Christmas. Even though the game will be free eventually, the Early Access version will have a price-tag somewhere under $20. Fortunately, anyone who buys the Early Access version will be refunded the amount they paid through in-game currency once it goes free-to-play.

Storm United appears to be a unique game that can bring a Halo-vibe to PC gamers. The game definitely looks like it will be a lot of fun to play, but the main concern is whether the free-to-play monetization will work. If it does, I can honestly see this game becoming popular for many years to come, but only time will tell.