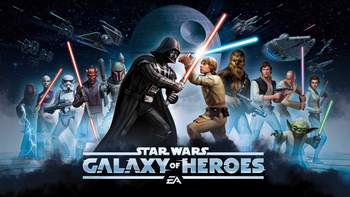 ​
Last November, popular developer EA released yet another Star Wars title, dubbed Star Wars: Galaxy of Heroes. Set in the extended Star Wars universe, the game allows you to collect many well-known characters and use them in battles. As you progress, you will come across iconic locations from the films and books, all the while waging epic battles against familiar faces. With the recent update, you will find yourself in a terrifying new location, facing one of the most memorable monsters in Star Wars history, the Rancor. Fear not, though, for you will be supported by your guild mates as you try to defeat this savage beast!

The biggest feature in the new update is undoubtedly the raid, but to truly grasp the raid you must first understand guilds, another huge feature that has been added. You can either join a guild or create one, although the latter will set you back 300,000 credits, a sizable chunk of cash for most players. Once you belong to a guild you can begin working on daily activities. Each day, the guild is given a task to work on and a goal to achieve. Completing said tasks and meeting the goals will award your guild with coins. Once you have enough coins, your guild can start its first raid! Only the guild leader and officers may start raids, this is to keep troll players from spending all your hard earned coins and setting your progress back. They even added a chatbox for guild members, which allows you to communicate and organize your guild more efficiently from within the app. Today's task is to spend energy on light side battles, with the goal being to reach 2500 energy spent.

Now, on to the raid itself! There are multiple tiers of difficulty for the raid, with minimum requirements for each tier. The lowest tier allows one star characters to join, but is intended for players who are at least level 30 and have characters with a gear level of 3. The second tier is for two star characters and is intended for level 40 characters, and so on. The raid is surprisingly in depth, featuring new enemies with raid-specific abilities and mechanics, as well as different phases for the Rancor, which means this raid will certainly be a challenge! As of now, no guild has successfully beaten the raid, meaning that the leaderboards are barren and every single guild member is working like crazy to get enough coins to start, in the hopes that their guild will be the first.

We also received a handful of new characters to unlock, the most important being Han Solo! While the other new characters can be unlocked through data packs and the guild store, Han can only be unlocked by playing the raid, meaning no one has him yet. He is being handled so secretly that you can't even view his attacks or abilities in the character page. Until he is unlocked, all of us are in the dark as to how useful he will be.