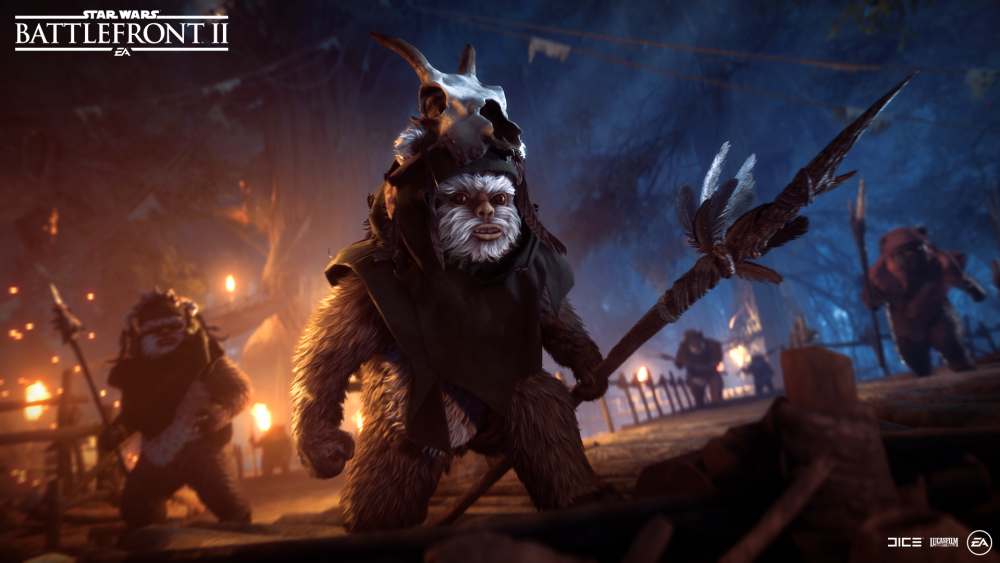 Star Wars Battlefront II's latest update, Night on Endor, has gone live on PlayStation 4, Xbox One, and PC, and with it so has a new microtransaction system for cosmetic items. The update also brings a new limited-time mode to the game, and since it's Endor, you could have guessed that the Ewoks are involved.

The new mode, called Ewok Hunt, involves a battle on Endor between the Ewoks and Stormtroopers. You choose which side you'd like to play; the Ewoks ambush the invading Stormtroopers and the Stormtroopers must hold off the horde until an extraction team arrives to help with their escape. Every defeated Stormtrooper spawns another Ewok over the battle, but of course, Ewok players will have to deal with the Empire's superior weapons.

​
Along with Ewok Hunt, Night on Endor brings Crystals back into the game. Crystals are in-game currency bought with real-world money and they can be used to purchase Appearances, like Endor Leia and Endor Han, which can be used to personalize units and are cosmetic only. You can also use in-game Credits to buy Appearances and personalize characters in the same way. There are also Tropper Appearances available, and here is a full list of all the new Appearances for characters in this update:
The return of real-money microtransactions is a big deal in Star Wars Battlefront II after developers pulled them from the game entirely following a big backlash over how they influenced gameplay progression. Now, EA's chief design director says the company has learned its lesson, and won't repeat the same errors again.

There are several other bug fixes and changes in the Night on Endor update, including changes to how Crafting Points work and a new Credit boost for winning matches. You can see all the details on Star Wars Battlefront II's Community Transmission.