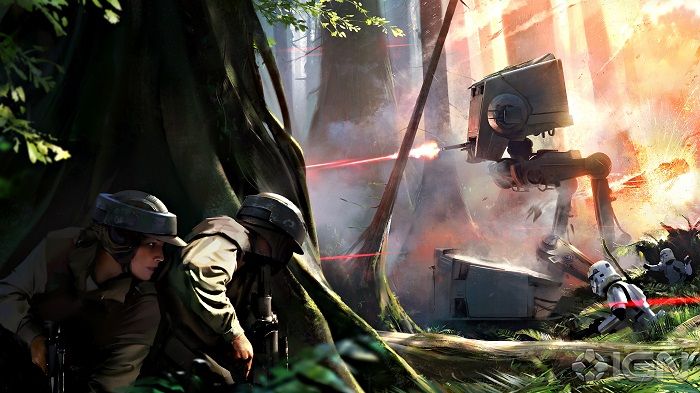 ​
With the release of Star Wars Battlefront slowly creeping up, DICE has kept quiet on the details of their next blockbuster game but has given us a glimpse as to what to expect in this beautiful concept art of Endor. The picture was given to IGN during an interview with Design Director Niklas Fegraeus who also gave details on what to expect from the next Battlefront game.

The imagery of the picture shows off a pair of rebels - one with a blaster and the other wielding a scoped rifle - hiding behind a tree preparing to flank two clone troopers. Behind the Rebels you can see an AT-ST firing through the woods over a fallen AT-ST leaving the impression that this game will have destructible vehicles much like EA's other Battlefield titles. In the background of the fighting we get a glimpse of Ewok villages in the trees where speculation leans towards versatile maps in which players will be able to overcome enemies from above.

During the interview, Fegraeus tried not to give out too much information on what they are planning but did give us a little insight as to what is to be expected. “The scale of our maps and modes offer a great variety” depending on the location inside the map Fegraeus told IGN. We can speculate that a map of Hoth will be bigger than one of Endor considering AT-ATs will have to fit smoothly in the game. He also explained how they are using their "internally developed photogrammetry systems" that use photographed images to achieve a high level of detail during gameplay. Doing so they expect to hopefully meet the expectations of the large fan base that the Star Wars Universe has amassed.

"We have actually made the decision to specifically tailor certain maps to certain game modes,” Fegraeus continued, “and what we get from that is not only incredibly varied scales, but also gameplay that will allow players to live out some of their most memorable Star Wars battle fantasies.”

“Perhaps the hardest part about bringing the franchise back is managing expectations,” said Fegraeus. “Star Wars fans, including ourselves, are incredibly passionate about the universe. Each of us have our own personal favorites. However, with the talent we have here at DICE, the Frostbite technology at our fingertips, and the fantastic working relationship we have with Lucas, I believe we will deliver a Star Wars experience that excites fans around the world and gives them the chance to play out battles in some of the most iconic locales in the series history.”
Click to expand...

Earlier this week's Electronic Arts earnings call, CFO Blake Jorgensen talked about how their next shooter is aiming for a launch date that aligns with the release of Star Wars: Episode VII - The Force Awakens, which is set to release in theaters on December 18. Jorgensen also went on to say that though the game is set to release around the same time as the movie, it will not be widely based around the movie thought it will use some of the same universe themes, items and characters. DICE has already been showing the game to close partners and one of the many things that they hear "is that it doesn't feel like other shooters and that it’s fully born from Star Wars" which is exactly what they are aiming for. More information will be revealed this spring when DICE is set to show more of what they have been up to.