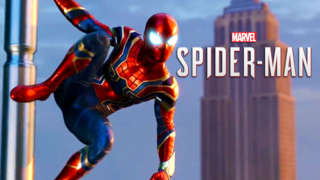 Those who have finished the first chapter of Spider-Man's The City That Never Sleeps story, called The Heist, we know it ended with a cliffhanger. Sony and Insomniac have now teased the second part of that continuing story with Turf Wars, coming on November 20. It packs the next chapter of the story and three more DLC Spidey suits.

After being spoken about in hushed tones in The Heist, the mob boss Hammerhead takes centre stage in Turf Wars. Here he's continuing his war on the other crime families, and he's brought some heavy-duty equipment left by Sable's mercenaries after her appearance in the main campaign. Turf Wars will include new story missions, bases to complete, crimes, challenges and trophies.

The DLC will also introduce another set of Spidey suits. This time they include the Spider-Armor MK-I suit, the Marvel Mangaverse Spider-Clan suit, and the comic version of the Iron Spider Armor. The comics Iron Spider looks a bit different than the one presented in Avengers: Infinity War, which already appeared in the game.

Turf Wars is available for $10 individually, or as part of the season pass for $25. That will get you access to all three packs--The Heist, Turf Wars, and Silver Lining, which is due in December.