Shovel Knight is a classic action adventure game in 2D, developed by Yacht Club Games, released on June 26th, 2014 for PC, Nintendo 3DS and Wii U.

Shovel Knight is a 2D side-scrolling platform game featuring an 8-bit graphics retro design that resembles classic NES favorites like Super Mario Bros. 3, Mega Man and Duck Tales, and also influenced by Dark Souls. Developed as the first game from former WayForward Teachnologies employees and their newly started Studio Yacht Club, it launched as a kickstarter with a minimum starting fund of $75,000. They ended up collecting a solid $311,000 before the campaign ended. As a result of this, they were able to add a lot more content than they hoped, some of which is still in the making and will be released as free updates. These include Battle Mode, Challenge Mode, Gender Swap Mode and three new campaigns where you play as some of the bosses. After several delays, the game was finally released on June 26, and within a month it sold 180,000 copies, more than the developers had hoped to reach in a lifetime. Even though this number does include the 15,684 Kickstarter backers, it is still quite the feat. It received above average critics, especially the 3DS version, and it was even mentioned in "The 22 Best-Reviewed Games That Don't Have Sequels (Yet)" on Kotaku, as well as a legitimate pick of the year from several editors on IGN. So it is safe to say that this Indie release has something more to it than just a successful kickstarter campaign. 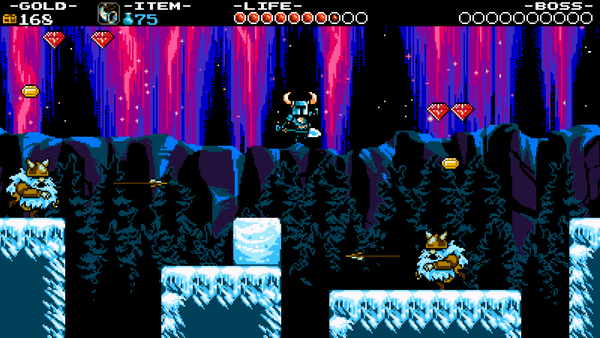 “You play as the eponymous Shovel Knight, a small knight with a huge quest. Shovel Knight has come to this valley with two goals: to defeat the evil Enchantress and save his lost beloved. He wields a Shovel Blade; a multipurpose weapon whose techniques have now been lost to the ages. Always honest and helpful, Shovel Knight is a shining example of the code of Shovelry: Slash Mercilessly and Dig Tirelessly! However, between Shovel Knight and his beloved stands a cadre of villainous knights. These terrible foes, known as The Order of No Quarter, have been dispatched to prevent Shovel Knight from reaching the Enchantress at any cost!”

This is your setting as you jump, bounce, fight and dig your way through a variety of maps to save your beloved Shield Knight. There is no better way to explain what you are about to embark upon than having you watch this trailer:

At first glance you might think this was made for NES in the late 80’s, and that is some of the point. Shovel Knight is a declaration of love towards an era of simpler, but not necessary easier games. Some have made tributes similar to this before, but they never seem to be able to keep players interested for long. This is where Shovel Knight shines through as something different, it has the ability to keep you sucked in all the way to the end. And why? The developers are relentless in keeping their focus on their goal and their inspiration, where other retro games of the same type suffer the lack of a proper goal or try too hard, Yacht Club manages to constantly push the right buttons at the right time. It is clear that they want you to feel like you did back in the day, while playing the very best of NES games, and they do so by giving us a game that balances exceptionally well between the three most important elements from back then: A defined style, solid game mechanics and superb music. It is not just the style and the technical solutions that scream NES, but the game mechanics themselves tells you that this game was made by someone that grew up with NES controllers in their hands. The most evident inspiration would have to be Mega Man, as you can easily see in the menu, the levels and the boss fights; as you fight your way through a level with a diversity of enemies, and end up in a closed room to fight a boss. But there are other influences at play as well, Castlevania, Super Mario Bros. 3, and Zelda II: The Adventure of Link has set their marks in the minds of the creators and thereby in this game. Just look at the way players can use the shovel as a pogo stick to bounce off obstacles or the heads of enemies. Sound familiar? 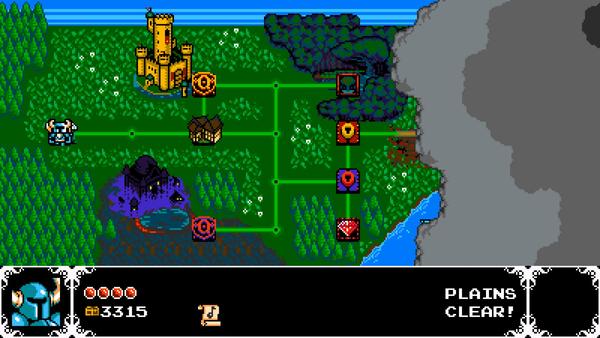 As the title indicates, the shovel is your only weapon, but fortunately some extras and upgrades are unlockable throughout the game. And that is indeed fortunate, as you will need it all. This is not an easy game, and by that I don’t mean Dark Souls hard, but good old fashioned NES hard. You have to be precise, or you will be dead. When you die you will lose some money, but thankfully, this can be regained when you get back to the place where you died. The fact that you don’t have a given number of lives might be a good thing, because you will die quite often. If you have high blood pressure, make sure to have your medications nearby.

Shining through as Shovel Knight's strongest feature, is the music. It is legendary, and might show up as a dark horse when game music of the year awards are due. The inspiration from Mega Man is at its strongest here, most likely since the composer, Jake Kaufman, also known for making the music for games like Contra 4, Red Faction Guerrilla and Duck Tales Remastered, had assistance from Manami Matsuma, the lady behind the music from the very first Mega Man game, on some of the tracks. No matter what level you are playing, the music is just right, and playing this with the sound off should be prohibited by law.

So is this a perfect game with no flaws then, you might ask. It is tempting to say so, but it is not. Stepping back, some weaknesses are there to be seen, it is a game you will either love or hate. If you are not into retro games at all, if you find the 8-bit graphics terrible, if you think the resemblance to NES is nothing but a silly gimmick, or you don’t like or have any relations to old games at all, Shovel Knight will be completely irrelevant and uninteresting, and definitely not the game for you. And even if you do love everything about it, the controls on PC lack a little in configuration. Using a controller makes it easier to be precise, and that is essential to say the least. If you are not scared away by any of this, I have no hesitations towards recommending Shovel Knight. It is honestly one of the most entertaining platformers I have played in a while, and the NES nostalgia makes it even better.

If you would like to experience the joys of this 8-bit piece of heaven, but don't have the cash to spend, fear not! I will be giving away a Steam Key to one lucky winner. If you would like a chance to win, simply let me know in the comments below. The winner will be chosen by a random number generator this Friday, around midnight GMT. Best of luck to all! Now, if you will excuse me, I still have a few levels left to beat.