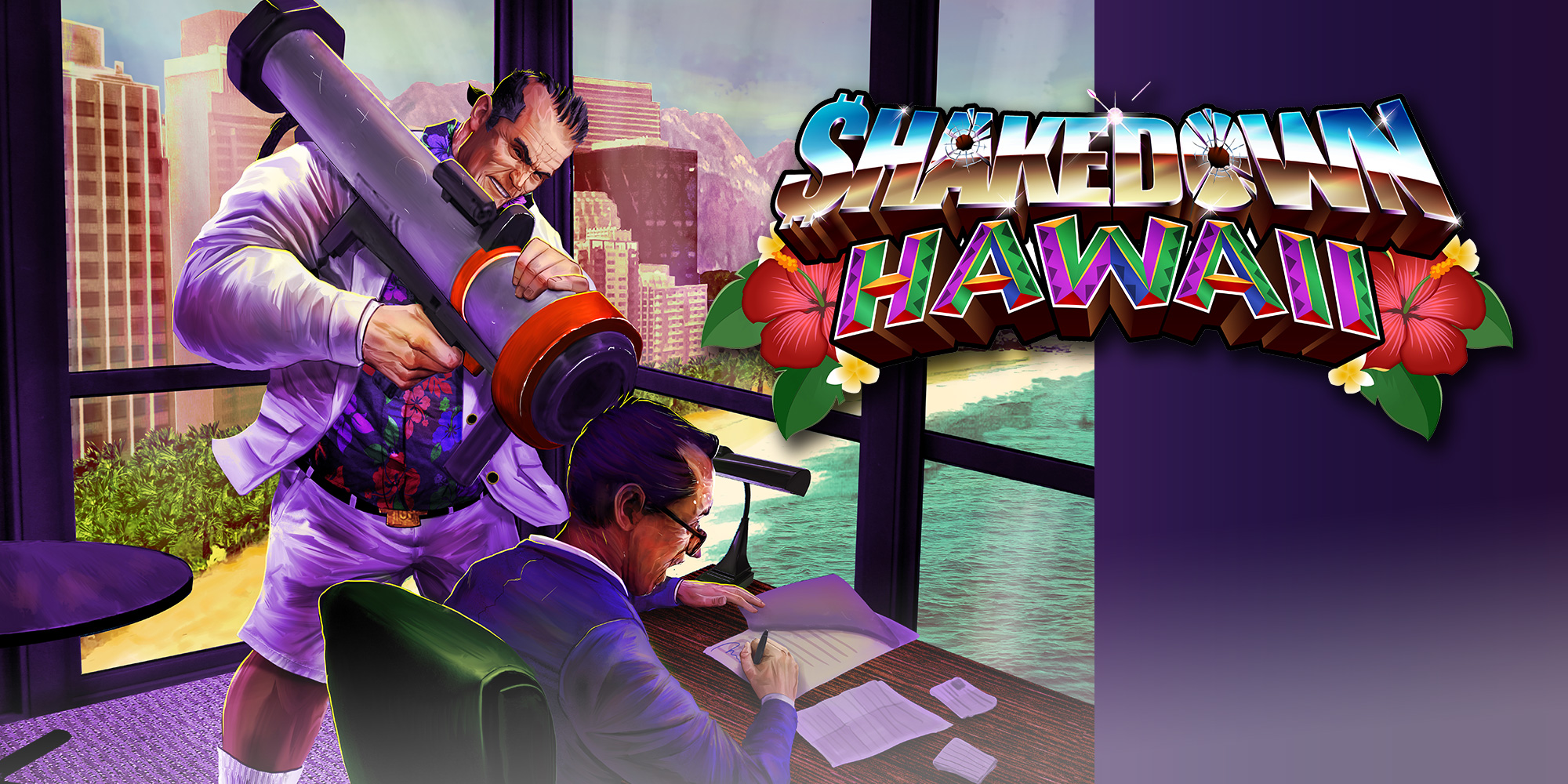 
‘Shakedown: Hawaii’ was first announced right here, a year and a half ago. I had no idea what everyone’s reaction would be, knowing that after Retro City Rampage, each of you would have your own picture in mind of what the next game would look like. I hoped that whatever that was, it would line up with what Shakedown is. So with that said, I couldn’t have been happier (and relieved) with how well it was received. Having explored so many different potential art styles with so many different artists, it looked like I’d ultimately chosen the right one. The new music direction went over super well too!

Since then, I’ve been busy at work on the game, and it’s come a very long way. It’s a new game, not Retro City Rampage 2, so there was a lot that had to be built. During that time, I’ve trickled out teasers, but they’ve only given you a peek at the art style, music, and the destructible environment. Today, the game’s finally fully revealed – its theme, story, protagonist, and… business acquisition metagame!

Check out the trailer and rundown below for the full scoop…


Where ‘Retro City Rampage’ was a send up to video games and pop culture, ‘Shakedown: Hawaii’ is a parody of mega corporations, white collar crimes, and the most comically egregious business practices that go alongside. It playfully satirizes business that’s so ballsy, you’ll be left saying, “I’m not even mad, that’s amazing!”

Out of Retirement… to Retire the Competition!


You play an aging CEO, stranded in a world he no longer understands, with a company that’s now a relic of the past.

Upon discovering that online shopping’s destroyed his retail margins, ride sharing killed his taxi business, and video rental stores… are no longer actually a thing… it becomes clear that keeping the company alive will require drastic measures. He’ll need to modernize the business! Unfortunately, the modernizations he chooses are exactly those comically egregious practices!

From the Boardroom to the Streets

But, whether you’re cornering the market on avocado toast or masterminding new hidden service fees, the missions ultimately unravel into the same carjacking, combat and shootouts you’d expect from the genre. 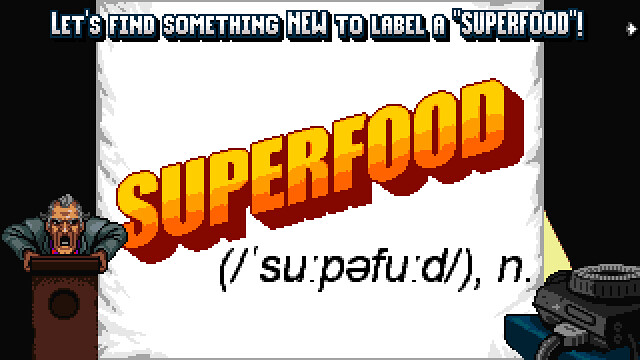 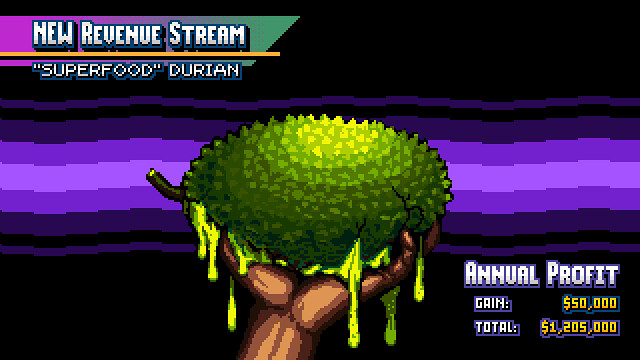 
As things begin to turn the corner, our anti-hero sets his sights even higher. Perhaps it was his rival’s taunts, or maybe he attended one too many motivational self-help seminars, or it could just be his own insecurity and over-compensation complex. Whatever it was, he declares that saving the company is no longer enough. He’s going to own the ENTIRE island! He’ll destroy EVERY competitor! He’ll convince the world that online shopping’s a dying fad, taxis are here to stay, and dammit… get everyone renting VHS tapes again! 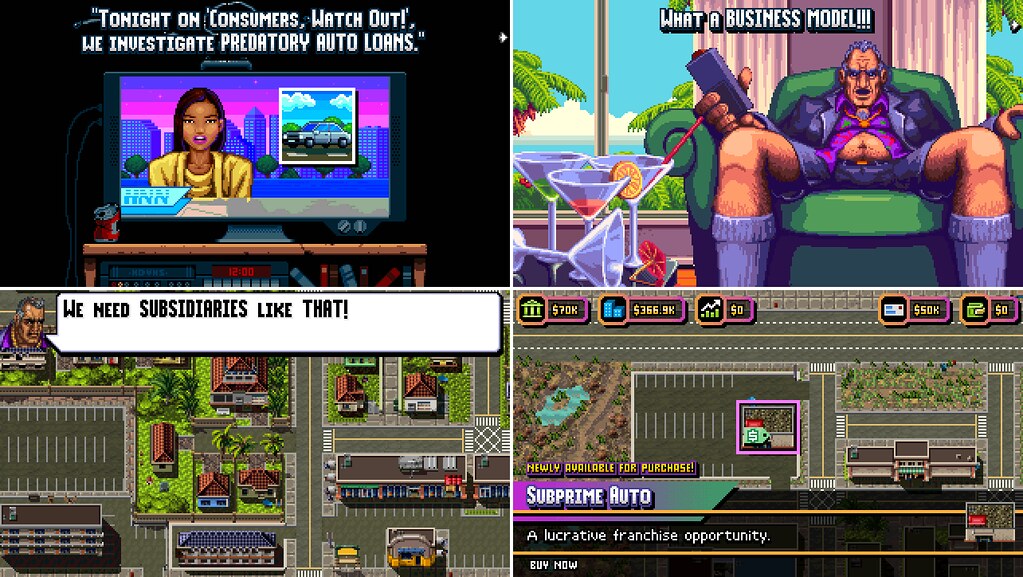 The entire island is up for grabs… or at least, will be once you ruffle enough feathers.

Through story missions, small jobs and your own acquisitions, you’ll gain ownership of properties and businesses. The revenue they generate can then be funneled back into more acquisitions.


Our anti-hero’s decision to spend more time on reality TV as a “CEO” personality, than as the actual CEO of his company didn’t help matters.


Even though he’s only reached D-list celebrity status, he’s still too recognizable to go on a rampage without a disguise. Luckily he owns a few costume shops in town. 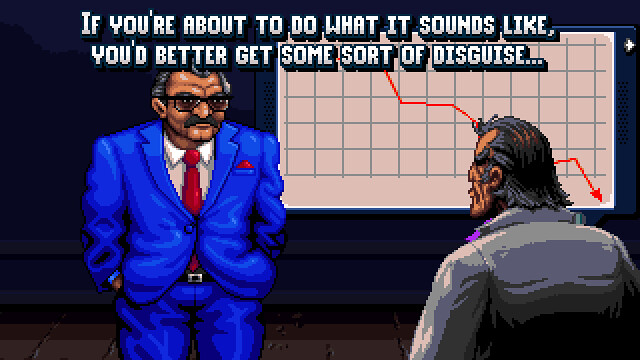 New opportunities will emerge as your empire branches out into new market segments. With the disguise, you can begin sabotaging competitors, threatening those who threaten your brands, and collaterally “rezone” land.


With your trusty disguise, you can also begin shaking down shops for protection money, and use that to fund your “legitimate” corporate expansion.

These micro missions are scattered all over the island and successfully completing them will provide you with additional streams of income.


More on these shakedowns will be revealed in detail in a later trailer dedicated solely to their part in the game, so stay tuned!


So there it is! That’s Shakedown: Hawaii!

Now that we’re past the teaser stage, look forward to much more frequent and meaty trailers, showcasing specific missions and characters, the world and shops, character customization, plus more of the soundtrack (composed by the incredible Matt Creamer, AKA. Norrin Radd).

Although there’s no release date just yet, Shakedown: Hawaii will be Cross-Buy and land on both PS4 and PS Vita! 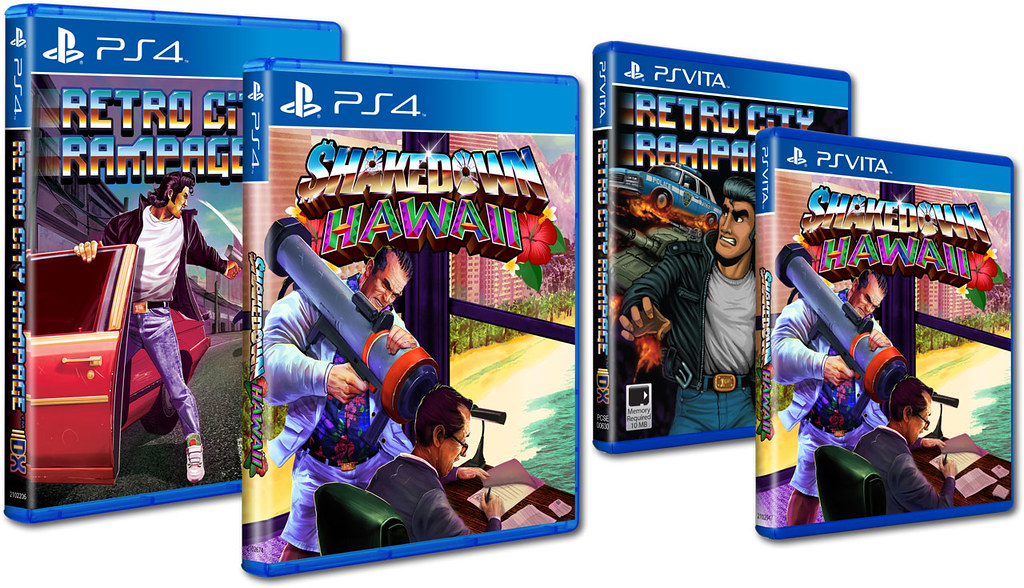