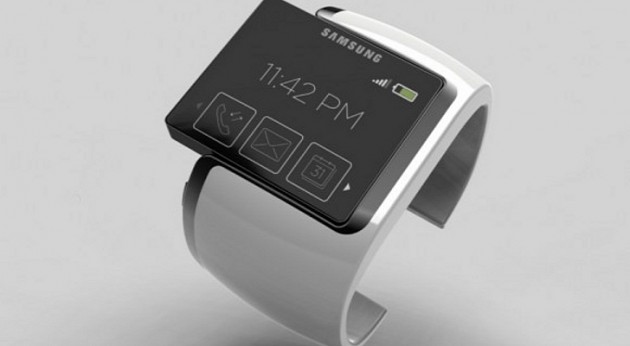 An internet impression of the Galaxy Gear.​

The South Korean technology giant Samsung will be launching an Android-powered 'wristwatch-like' device next month, according to reports from Bloomberg. On the 4th of September, Samsung will reveal the Galaxy Gear; which is a smartwatch that'll allow the user to make phone calls, surf the Web and handle e-mails. The Galaxy Gear is likely to be revealed along side the Galaxy Note III, which is set to be announced 2 days before the consumer electronics show in Berlin.

At the moment it appears the device will act as a companion device to other Samsung products, rather than a replacement for fully-fledged phones or tablets. Although no release date has been confirmed, it's expected that the Galaxy Gear will beat the rumoured 'iWatch' to the market, which could 'lock customers into their platform', as predicted by Nomura Holdings Inc. in Seoul from Bloomberg:

"The global watch industry will generate more than $60 billion in sales this year, and the first companies to sell devices that multitask could lock customers into their platform, boosting sales of smartphones, tablets and TVs."

The smartwatch industry has yet to take off. However, with every major technology manufacturer currently designing one, perhaps this could change. Industry analysts Canalys are predicting that the current 330,000 sales will heavily increase over the coming year; with a predicted 5,000,000 sales to take place in 2014. Bloomberg are also eager to make predictions, suggesting that "the global watch industry will generate more than $60 billion in sales,”

Current smartwatches have under performed to say the least, with Sony's SmartWatch not exactly taking the market by storm. However, this could be due to the lack of popularity Sony's smartphones have received. Furthermore, Apple's iWatch is also facing some difficulties in design, with over 100 developers shipped in to work on the device at the headquarters in Cupertino, California. Since Samsung is the first major company to have a popular smartphone and now a watch, their success will say a lot about the future in the smartwatch industry. Leave your thoughts and comments below.