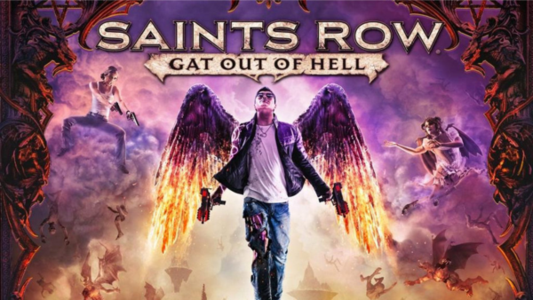 Earlier this summer, Volition expanded their team which made it seem like they are getting ready for a big project. Many people speculated that this project would be an entirely new Saints Row game, presumably Saints Row V. However, today they revealed that the big project is “Gat out of Hell,” a new expansion of the Saints Row series.

The game starts off with the president of the 3rd Street Saints getting sucked into Hell after using a Ouija board. Then, Johnny Gat and Kinzie Kensington team up to try to save him. After entering Hell they find out that the devil is holding the president captize so he can marry the devil's daughter, Jezebel.

The main setting of the game, Hell, is roughly half the size of Stillwater and is composed of five islands. Three of the islands are described to be a wasteland, a city-like downtown, and a run-down slum area. Throughout Hell there will a variety of different demonic enemies Gat and Kinzie must fight in order to save their president.

In order to have a standing chance in Hell, the player is introduced with new guns and powers. The new guns will be the Arm Chairmageddon (a weaponized chair), the Energy Caster, a locust gun, and a weapon that releases a plague of frogs. Players will also be portrayed as angels and have the ability to fly. In addition to flying, players will also have supernatural abilities including the summoning of demons, a supernatural shield, and The 7 Legendary Deadly Weapons which represent the 7 deadly sins.

Gat Out of Hell is not an entirely new sequel to the series and is advertised as an expansion. However the game can be purchased for $19.95 even if you don’t own previous Saints Row games. You can pick up the game on January 27, 2015 for PlayStation 3, PlayStation 4, Xbox 360, Xbox One, and PC. The PC version will also include an SDK that will allow players to create their own content. The expansion will also be included in the re-mastered version of Saints Row IV coming to Xbox One and PlayStation 4.