Rogue One: A Star Wars Story, What We Know So Far 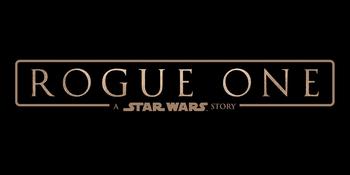 ​
Rogue One: A Star Wars Story is the first of three upcoming "anthology" Star Wars films. It's aiming to be something rather different than what we've been used to with Star Wars movies, it's not centered around the Jedi or Sith and for the most part will almost certainly have no "force" present in it. It aims to be a boots-on-ground flick revolving around the Rebels and their mission to retrieve the Death Star plans. If you're familiar with Star Wars, then it should be apparent that this film will be taking place directly before A New Hope and will be our first glimpse of the time period between the prequel and original trilogies on the big screen.

Boasting a slew of unknowns and new faces, Rogue One's characters, as well as the cast playing them are looking unique, to say the least. Felicity Jones will be taking on the role of the main protagonist this time around. We don't know very much about her besides her name, that being Jyn Erso. The trailer gives us a small tease of her personality, she's been alone for a long time and she doesn't play by the rules, in other words, she's rebellious. Essentially nothing is known about the other new characters. Donnie Yen is portraying someone who is very samurai-eqsue, Ben Mendelsohn appears to be playing an Imperial official of some sort, menacing would be a fitting word to describe him. Mon Mothma is returning to lead the Rebels, this time with the excellent casting choice of Genevieve O'Reilly. Other actors include: Mads Mikkelson, Forrest Whitaker, Diego Luna, and Alan Tudyk. Gareth Edwards, known for his 2014 Godzilla reboot will be donning the role of director for this upcoming movie.

A website known as Making Star Wars has given us a very exciting and interesting rumor. Making Star Wars has quite some credibility to it, they gave out an entire synopsis and script leaks for The Force Awakens, and without that credibility, I would not be mentioning them. The aforementioned rumor is regarding none other than the iconic Darth Vader. If this rumor proves true, the film will bring to light a side of Darth Vader that we have not seen in live-action. Not only will he be back (keep in mind he's alive and well in this time period) but he will apparently be "more violent than ever." The reports state that multiple suits have been built for Vader, one of which being a "direct copy" to the one he dons in A New Hope, another being an alleged stunt suit, pointing towards Vader being a part of the action in Rogue One. These possible action scenes sound brutal, especially for onscreen Star Wars. There are a few pitches as to what these scenes may include and those include, but are not limited to: Vader decapitating Rebels, people being dismembered by Vader using his iconic saber-throw, and Vader levitating bodies to be used as human shields. It's been said to be (and definitely sounds) more violent than we've ever seen Darth Vader on screen before.

That was arguably some of the last substantial information we've had, that is until the first trailer dropped just yesterday. This trailer has been incredibly well received so far, and for good reason. Not only does it provide a satisfying tease for what's to come, but it also is accompanied by a familiar, nostalgic feel. With shots of original Stormtroopers and Star Destroyers as well as the construction of the first Death Star, this trailer was loaded with a familiar bliss that all Star Wars fans know and love. There is a magical blend of old and new alike to be found in this trailer, with the inclusion of a "new" type of Stormtrooper to an apparent Samurai cutting down Stormtroopers at ease, and let us not forget the beach warfare where the Rebels are seemingly led their decimation by the Empire's AT-ATs. If there is one shot, in particular, that has gained everyone's curiosity it would be the one of a dark-robed figure kneeling down near Imperial Guards. There is no way it is Vader and judging by physical build, not Sidious either. All bets point towards it being an inquisitor, if you watch Star Wars: Rebels that may raise an eyebrow. Taylor Gray, the voice of Ezra on Rebels has mentioned that there will be ties between Rebels and Rogue One but he wasn't allowed to elaborate on that. Only time will tell how that plays out.


​
Undoubtedly this film will warrant tons of attention and sales, it is Star Wars after all. In some ways, this movie will appeal to an even wider audience than The Force Awakens did. We haven't seen the original trilogy era of Star Wars on the silver screen since 1983. Old and new fans alike are certainly in for a treat with Rogue One, and if you're not into the mystical aspects of Star Wars perhaps this will be the perfect addition for you, as this flick is sure to lean towards not only realism but war and espionage as well. We have a Star Wars film every year for the next four, and come December we'll all be ready to dive back into that beloved universe, this time with Rogue One.

May the force be with you.
About author