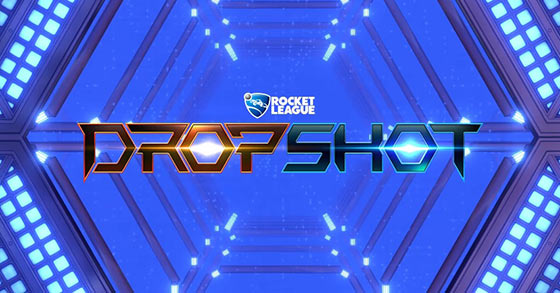 ​
Rocket League developer Psyonix today announced the game will receive another new match type later this month. "Dropshot" launches on March 22 and, as with previous additions, will be free to all players. Unlike standard Rocket League--which largely follows the traditional rules of soccer--or the basketball-inspired Hoops update, Dropshot does not directly emulate an existing sport. According to the developers, it was originally inspired by volleyball but gradually morphed into an entirely original concept as the team worked to make the mode accessible to all skill levels while still retaining the game's signature physics.

Dropshot matches take place in a hexagonal arena that's divided down the middle and overlaid with a grid of smaller hexagons. There are no fixed goals or scoring areas; instead, players must break through the floor on their opponents' half of the field by knocking the ball downward. The ball itself charges every time it's struck by a car--the harder the ball is hit, the more it charges, and the more charged up the ball is, the more hex tiles it damages when it eventually touches down.

In order to create an opening in the floor (and ultimately score), players must first damage a tile, then hit that same tile again to destroy it, then knock the ball through the resulting hole. The ball will fall through openings but cars will simply drive over them. Once a goal is scored, the scored-on side of the field resets to a fully filled-in and undamaged floor. The scoring team's side retains whatever damage had previously been done, giving the other team a chance to catch up. In the event that a match reaches overtime, any damage done during regulation remains.

​
Unlike standard Rocket League, there are no boost pickups. Instead, every players' boost meter automatically refills over time. In theory, this should make it easier for players to utilize high-flying aerial techniques to spike the ball downwards--a crucial skill in Dropshot since the ball does not damage the floor if it's simply rolling. And because there are no set goals, defense become less about goaltending and more about diving beneath the ball to change its color before it touches down and damages tiles on your side.

In addition to adding Dropshot--which will be playable in its own online playlist, as well as both private and exhibition matches--the March 22 update also includes six new Dropshot-specific Trophies and Achievements, a new car called the Endo, seasonal Easter items, and an "Esports Live Now" button that appears at the top of Rocket League's main menu and links to major Rocket League livestreams. This update also marks the end of "Competitive Season 3" and the beginning of "Competitive Season 4." Players who completed the third season will receive exclusive wheels as a reward.