Risen 3: Titan Lords is a single player action RPG, the sequel to Risen 2: Dark Waters. This third installment in the series was released on August 12th on PC, PS3 and Xbox 360, published by Deep Silver and developed by Piranha Bytes.

Creativity and imagination has never been Piranha Bytes strong side. Despite a limited but loyal audience, they have released more or less the same game over and over again for the last ten years. Always ambitious, but generic and sloppy RPGs that never were really bad, but never made it to the top of the category. It is hard to tell if Piranha Bytes actually know how predictable they are, because even though Risen 3: Titan Lords might be the best in the series this far, they still lack innovation, there are very few changes, and they never take any risks. There is nothing wrong in going safe, that is what 90% of the gaming industry does, but when recycling cliches is all that is happening, you should eventually take a moment to stop and think about what you are doing.

The story starts off right to the point, you are the son of a legendary pirate and with your sister, suitably dressed like a pirate cosplay-girl, you are exploring an old ruin. Unsurprisingly, an undead demon from another dimension turns up and takes off with your soul. Your sister tries to put on a sad face and the voice actor makes a poor effort to sound upset, then your character is dead. Now that was unexpected. All of a sudden, and again not very surprisingly, an incredibly British voodoo priest shows up to breathe life into your soulless, buried body. So with a fresh start, you are off to find your lost soul and save the world in the process.

After this predictable start, with low quality voice acting and unimaginative directing, Risen 3: Titan Lords begins its journey towards surprisingly entertaining gameplay. On our way we will meet a familiar, somewhat improved battle system, average, but okay voice acting and a solid amount of side missions. 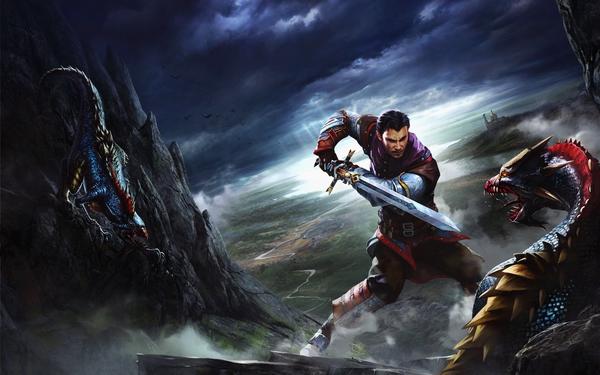 Fights are mastered by frantically mashing your left mouse button, often helped by surprisingly useful side kicks. As they brought magic back into this game, you get some much needed variety. The difficulty is refreshingly high, as always in this series. That being said, battles are soon turned into routine. You can earn an abundance of skills, and later on in the game, you get to select one of three special classes, Mage, Demon Hunter or, the obvious choice, the Voodoo Pirate.

This freedom of choice and the amount of side missions available, makes out two of the three good parts of this game. If you disregard the incredibly funny, unintentional voice acting, the third and most essential strong point is, what many RPGs seem to fail on, secrets. This game is riddled with secrets. Everywhere you go there are hidden missions, lost treasure and useful items to be discovered. If only the rest of the game had this level of mystery and spirit of adventure, Piranha Bytes would have had a winner. Instead we are seeing a captivating yet cliché-filled quality RPG. It ends up somewhere in between World of Warcraft and Dark Souls, most missions are "go there, kill that, return." Identically programmed enemies randomly patrol the areas, and make for a predictable journey. Sound design and the story itself is not even close to being good enough for this kind of game.

This is basically as close as you will get to the stereo type of an RPG. But they manage to create a mysterious and unexplainable enthusiasm, and that is what saves this game from disaster. Because it really looked like one. I don’t doubt that fans of the previous installments will have hours of fun and entertainment here, but it might be a little too sloppy to pass for the rest of us.

Are you a fan of the series? How do you think the developers did this time?