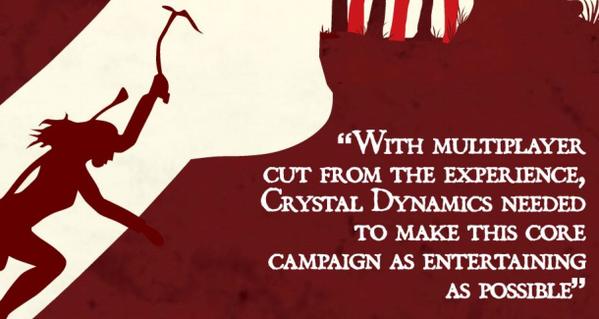 It has been revealed in the September issue of the Official Xbox Magazine that Rise of the Tomb Raider won’t have any multiplayer features.

The studio behind the Tomb Raider reboot have decided to cut the multiplayer aspect of the game so they can focus all of their time and effort on the single player story mode. Revealed in a tweet you will see an excerpt from the OXM issue in question stating:

“With multiplayer cut from the experience, Crystal Dynamics needed to make this core campaign as entertaining as possible.”

In 2013 Square Enix published one of, if not, the best Tomb Raider video games in history, many fans of the franchise were surprised when it was announced that the 2013 title would feature multiplayer game modes. Many fans feel as though the multiplayer portion of the game felt like it was rushed and simply thrown in with the game so it would offer another experience for those who dislike playing single player only games.

I for one have never played the multiplayer game modes in Tomb Raider so I cannot share my thoughts on that, but what I can do is say that I am happy Crystal Dynamics are doing this, instead of working heavily on a multiplayer game that appears to need major improvements they can spend that time developing and building a better, richer single player experience.

Are you happy with this decision? Would you have liked to see a newer, more improved multiplayer aspect to the game? Let me know in the comment section below.