Review Scores Are Hurting the Industry 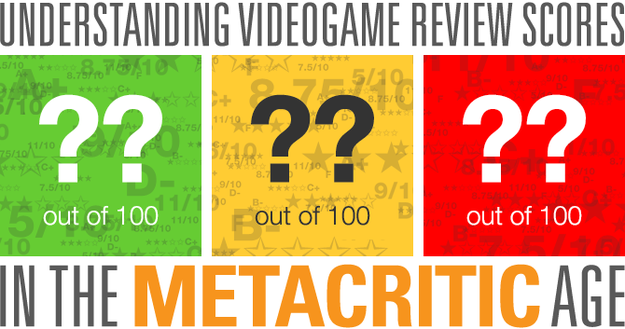 Image from crit-hit
​
The games press has been around for quite some time. One of the longest lasting traditions within the industry is rating content based on a numerical system. Despite this system causing a lot of controversy, a majority of the review platforms decided to stick with the system. However, there seems to be a recent trend of dropping traditional scoring all together. First it started with Kotaku and Joystiq, and now Eurogamer has replaced numbered scores with a simple “Recommended, not recommended, and avoid” system.

Review scores themselves are a great idea. If they could be executed properly, they would allow consumers to make a purchasing decision without spending too much time researching the game. Whether this would be a good or bad thing is up for debate. However, there is no doubt that the current tradition of scoring within the games industry is broken.

The first major issue is the consumers varying perception of numbers. To many, a 5/10 score implies that the game is garbage and not worth any of their money. Is it really that bad though? A 5/10 should indicate that the game is below average, but it isn’t necessarily completely worthless. If a five is completely worthless, then what do the numbers one through four represent? Of course, there are some sites that go on a scale out of five, and I’ll admit that this does alleviate some of the issues. Regardless, it’s still a completely arbitrary number.

This leads on to the next inherent flaw with the system. Not only can the number be perceived differently amongst the readers, but there is absolutely no standardization behind the numbers. A six from one site could be the same thing as an eight from another site. Of course, every gamer and reviewer values different things within a game. In fact, this is the exact reason why we have multiple sites and platforms for reviews.

I think it’s perfectly reasonable for different people to have different values. But one of the issues is that there are multiple people writing reviews for one site. For instance, my taste in gaming may be completely different than that of the other writers here on Se7enSins. While this doesn’t present much of a problem here, it seems to be a fairly big problem on larger sites like IGN. IGN has become a rather iconic name in the industry, but the names of writers, like Vince Ingenito (who recently gave Evolve a 9/10 on IGN), have much less substance. Sure, it’s unreasonable to expect one person to review every game. But with the numerical system, reviews are more about the company behind the number rather than the writing itself.

One recent review that showcases this issue extremely well is Don Saas’s review of Raven’s Cry on GameSpot. The review got an extremely poor score of 1/10, and this is only the 4th time in 20 years GameSpot has given out a one. While there’s no doubt that this game is bad, some of the reasoning for GameSpot’s score is very questionable. In addition to the legitimate cons of the game, Saas also said one of the attributions for the low score is “Rampant racism, sexism, and homophobia.” If this was a review for a game intended for children, I think a lower score would be justifiable. On the contrary, this is a M-rated game about pirates in the 18th century. In fact, the official description even says the game is “shaking off the family friendly themes and silly pirate films to bring you a bloody pirate adventure.” Based on the game’s theme and description, anyone with common sense should expect to hear some foul language and a crude culture. Don’t get me wrong, I don’t think Saas expressing his discomfort with the language and culture is bad. What is bad is the fact that this likely influenced his horrible score. Of course, there’s no way to tell whether this was the difference between a 1/10 and a 2/10, but this just further highlights the issues with x/10 (or x/5) scoring.

Another recent controversy related to scoring was the reviews of Halo: The Master Chief Collection. This was arguably one of the most anticipated games 2014, but it ended up being a major bust. The controversial part about this is that the gameplay itself wasn’t flawed, but rather the online capabilities. The game had a horrible launch and is still full of issues. This brings the question as to whether review scores should account for server issues. To eliminate the risk of giving a broken game a premature good rating, Eurogamer has decided to hold off all multiplayer reviews until the game has actually launched, thus getting the perspective of every consumer. While this is a viable solution for some launches, it won’t work for all considering they may never get fixed. This issue pertains to reviews as a whole and not just scoring, but it does also bring up the question of how much technical difficulties should influence a score. To be fair, they often can get fixed.

While it may sound like I’m bashing on all the sites that use x/10, that isn’t necessarily the case. Trust me, I get why sites are sticking with scores. Frankly, using scores can get any site more views and, in turn, more money. There are a lot of consumers who couldn’t be bothered to read an entire review or watch an entire video, and just skip to the concluding score. There are also score aggregation sites like metacritic that do nothing but hurt the industry. Metacritic takes all the flaws with scoring and magnifies them into one score. There is absolutely no context with metacritic scores, yet it is one of most popular sources for consumers to get reviews on games.

It’s hard to say who’s to blame here. To be honest, the consumers, reviewers, and publishers all share the blame. Unfortunately, this also means there isn’t a simple solution, and it will likely never completely go away. On the bright side, there may be even more media outlets that will follow in the steps of Kotaku, Joystiq, and Eurogamer.
About author