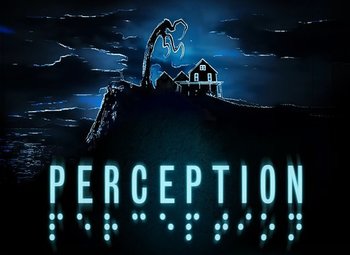 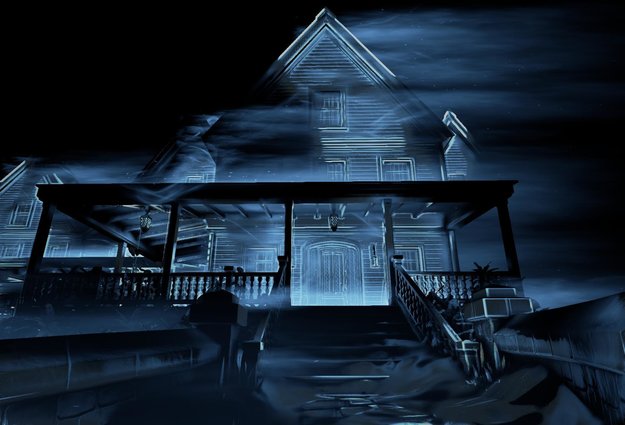 Perception is a first-person narrative horror adventure game in which the player controls Cassie, a blind protagonist searching the Echo Bluff Estate in order to learn why the location haunts her dreams. Cassie navigates by means of echolocation. In other words, by listening to her environment's sounds such as running water, footsteps, wind, and by tapping her cane, Cassie is able to navigate the complex layout of Echo Bluff. However, if she taps her cane too often or makes too much noise, an evil entity known as "The Presence" will be on the hunt for her. The game was developed by The Deep End Games (comprised of developers who worked on the BioShock series and Dead Space) and published by Feardemic. Perception started out as a Kickstarter Project on May 26, 2015 and has since been released on Microsoft Windows (May 30, 2017), PlayStation 4 (June 6, 2017), and Xbox One (June 6, 2017). Perception is also planned to be released on the Nintendo Switch sometime later this year.

Roughly two years ago, I backed this project on Kickstarter. Now, roughly two years later, I was eager to have the pleasure of experiencing Perception in its entirety. The game can be played in two different modes: one mode where Cassie is more talkative and comments on her observations (Chatty Cassie) and a second mode where Cassie only speaks when necessary for the plot (Silent Night). I played using the first mode and was pleased to be treated to good voice acting and decent writing. In short, Cassie is a likable protagonist with a somewhat dry wit. Without spoiling the plot, she is a strong, independent character who empathizes well with others. The first word that comes to mind after playing through the entire game (even with Chatty Cassie's comments) is "surreal." While the Estate at Echo Bluff may seem like the average haunted mansion cliche, it is far from it. Without spoiling the details of the story, it should be noted that in each of the four chapters of the game, Cassie experiences the environment in different ways. To elaborate, the corridors of Echo Bluff morph into the manifestations of events experienced by individuals who lived at the Estate over the prior decades. Despite at points being assigned simple tasks such as fetching particular items, I couldn't help but get sucked into the immersive environment. Surrealism is not only a focal point of the environment, but it is a focal point of the story as well. As I jumped from one chapter to another, I struggled to piece together how any of the chapters related to one another (to no avail). Fortunately, all of the questions I had were answered near the end of the final chapter to the point of a personal satisfaction. The story wraps up nicely and left me feeling an urge to replay the chapters to see what details I had missed. 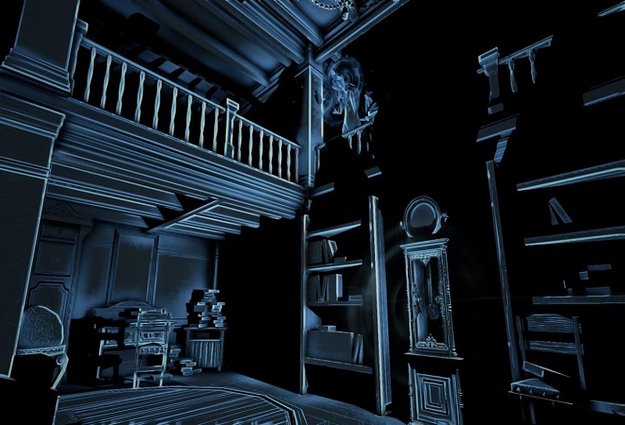 In terms of the game-play itself, the story took me about three to four hours to complete. Admittedly, I was moving fairly quickly and there were certain areas in each chapter that I did not explore in great detail out of caution. The controls are nice and fluid and I had no trouble maneuvering Cassie, especially given her ability to run at a relatively fair speed. The true effort was trying to balance being able to "see" via tapping Cassie's cane and walking without making too much noise as to put her in danger. With each tap of her cane, you as the player can see the layout of a portion of a room for a second or two in a blue color (see the images herein). Perhaps most helpful is Cassie's skill of remembering particular fixtures of interest such as doorways and chimneys and "seeing" them as green instead of blue. This feature really helped me not get (too) lost during my exploration of Echo Bluff. Furthermore, the game provides you with an "extra sense" function such that you can hold down a button and a particular object or doorway will glow a light blue color in the distance; Cassie will automatically turn towards this light blue object. You'll still need to do the navigation to get to the objective yourself, but I found the "extra sense" function to be a good half-way point between an arrow over your head with a way-point and being thrown into a maze with no directions. Additionally, it is worth noting that Cassie will use a text-to-speech application on her cell phone to read documents you find and will even reach out to a live chat individual on an application to orally describe photos she captures with her phone. I would go into more detail insofar as how these applications factor into the plot, but I do not want to give away parts of the story.

Throughout each chapter, there are plenty of objects and audio recordings for Cassie to interact with and listen to respectively. Often, they provide backstory to the current chapter or objective at hand. Whenever I would listen to one of the audio recordings, I could not help but tense up because of worrying that The Presence was coming to end me. "The Presence" is a fitting title for the evil entity as it seems to be omnipresent throughout the Estate. I could not pinpoint exactly where it spawns in as it seemed to be different every time I would hear it coming. The game is extremely fair in this respect as not only can you hear The Presence, but if the entity knows you're around, your blue-colored vision turns to yellow and eventually to red to show the imminent danger. At this point, you need to run and find a place to hide (such as behind some curtains or in a closet). I cannot stress "run" enough because The Presence will hunt you down even faster than some of the enemies in Outlast and Outlast 2. There are no elaborate chase sequences in Perception, but I will admit that my hair stood on its ends the first couple of times The Presence was after me. 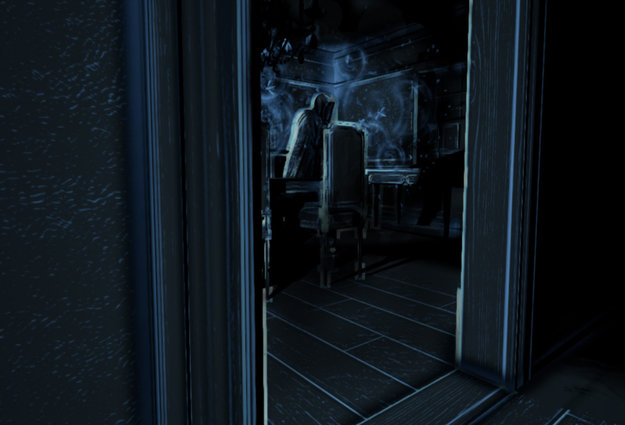 Although I really enjoy The Presence as an enemy, I feel like having it as the main enemy is a shortcoming. For how surreal the four separate chapters are, I couldn't help but long for some other type of enemy chasing me around with a different personality so to speak. In the third chapter, a second type of danger is presented that Cassie must avoid, but irregardless The Presence still remains as the main threat. Again though, I can not say that I ever became proficient in outsmarting The Presence or that I ever got to the point of not viewing it as a threat. Nevertheless, my understanding of The Presence lowered the game's fear factor for me because I knew that all I had to do was be fast enough to find a place to hide. Indeed, there are plenty of tense moments in the game. In fact, just from how the game functions inherently, Perception gets some points from me in that it embraces the idea that sometimes nothing happening is even scarier than something happening. Furthermore, the game's audio including the sounds of Echo Bluff and the good voice acting creates a fairly eerie and immersive atmosphere. However, it would be unfair of me to claim that I ever got the point of being genuinely scared like I was during certain segments of Outlast, The Suffering, and SOMA. One other shortcoming the game had was at its ending insofar as how the conflict with The Presence was resolved. It was pretty anti-climatic.

At the end of the day, I am happy that I backed Perception and I enjoyed playing it. While it is not as scary as I hoped it would be, I enjoyed its surreal environment and story. Given its visuals and audio, the game has a creepy, eerie atmosphere that should be appreciated. Perception currently costs $22.99 on Steam, Xbox One, and PS4. If you're a fan of eerie narrative-driven horror games and want to be a bit on edge (but not quivering in fear), I would recommend it. I enjoyed my first play-through on PS4, but seeing as how many trophies I missed, I'm looking forward to returning to Echo Bluff to see what else there is in store for me.
About author