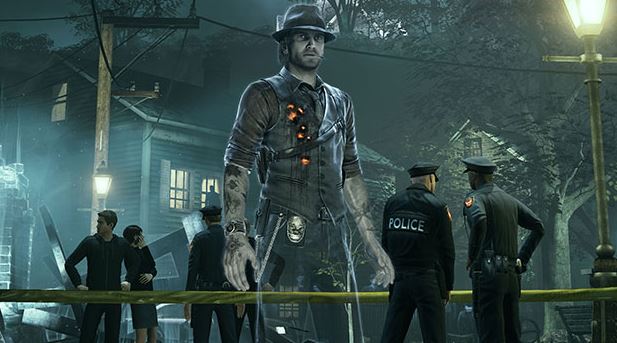 The idea of being a ghost has always interested me. I am not sure on whether or not I really believe in ghosts, but the thought of being able to pass through solid objects and cause unseen disturbances seems potentially entertaining. In Murdered: Soul Suspect, players take control of detective Ronan O’Connor, who has recently been murdered and now walks the Earth as a ghost. Ronan has some unfinished business to attend to, including learning the identity of his murderer, before he can “crossover” to the next life in peace. The story itself takes place in Salem, Massachusetts, and at first, players would expect to have a lot of freedom given their environment and special abilities. Unfortunately, these expectations are pretty much eradicated within the first few minutes of gameplay.

Right off the bat, the player sees Ronan trying to capture a murder suspect. There is a struggle and Ronan is forced out of a window. He barely survives the fall, insofar as he perhaps only has a breath of life left in him. The suspect picks up Ronan’s pistol and fires seven shots into Ronan’s chest, fully killing him. From here, the player is given control of ghostly Ronan and is given the task of beginning to track down any leads to the murderer. From here on out, the player will need to focus on certain small areas or rooms in which there are clues. The player can walk around the room, gather said clues, and then piece them together in a correct order to form a fully coherent thought. Most would think the virtual world of Salem would be wide open, especially for a ghost who can pass through objects. However, most would be disappointed, as I was. Ronan can pass through normal objects but cannot enter buildings within Salem. To top it off, most of Salem has ghostly matter blocking streets which Ronan cannot pass through because he is a ghost himself. As far as why Ronan cannot pass through buildings, it is apparent that the buildings in Salem had been “consecrated” and thus ghosts cannot enter unless a door or window is left open. While I do applaud the early explanation as oppose to open contradiction, these limits severely force the player in a controlled, limited path.

With this path set, the story is also set in a forward motion with little wiggle-room for alternatives. As the player advances, Ronan is simply greeted with other areas for investigation as opposed to Salem at their disposal. Not to mention, the environment of Salem seems pretty basic with a lack of variation. What makes the environment unique is its ghostly matter probably lasting from its darker stages in the past centuries, but this matter is only meant to block the player in and keep them on the path toward the game’s completion. Speaking of which, it is pretty difficult to not be able to complete this game. From my observations, if you gather clues, you can find out what correct ones to use a by a simple trial-and-error or process of elimination method. Even still, most players will not even need to something along those lines because most hunches drawn from clues can be easily determined by one’s own thoughts. I’ll have to admit, the acquisition of some clues is engaging, however. Some clues to be found or used require the use of Ronan’s ghostly powers. For example, Ronan is able to possess individuals and read their thoughts (a whole two thoughts that repeat if the player continues reading someone’s thoughts) and he can also influence others’ thoughts with various clues from an area. While the powers are pretty interesting, it is very difficult to find use for them outside of completing the story that is clearly very linear and one-sided. Perhaps what truly makes me feel a bit silly is the character of Ronan. While his former criminal history is alluded to, he seems like a cliché less-than-traditional detective with a deep voice. The story of Ronan solving his own murder surely is an interesting concept, but the involvement of a small sub-plot involving his deceased wife makes me feel pretty “sappy.” The other characters in the game are nearly as predictable as the story’s “puzzles,” such as the borderline young “emo” female medium that helps Ronan along his way.

While most of Murdered: Soul Suspect is predictable, there are some fresh surprises. Throughout the tightly controlled story, the player does have the option of helping other ghosts with taking care of their own unfinished business. Most of the ghosts you encounter are often simply confused and wondering how they died. Within a merely two-minute investigation, the player can quickly help the character find details of their death, and thus helping them to achieve peace and move on to the next life. Additionally, various objects can be recognized by Ronan so that small flashbacks about other deaths or murders can be pieced together and subsequently viewed. Lastly, the demon enemies Ronan encounters are creative, but simply make me think of Dementors from the Harry Potter series. They are relatively easy to take down; all the player has to do is get behind them and complete an analog directional and button combination. Incorporating these hostile entities into gameplay does allow the player for a small bit of freedom at points, but I still felt trapped on a straight line in the long-run.

All said and done, Murdered: Soul Suspect is an okay game. The concept of being a ghostly detective is truly interesting, but the manifestation of said concept in the game is not as spectacular as most would hope. While the player can walk through [some] walls, cause TV’s to flicker like a poltergeist, take control of a cat by possession [shout out to Aaron], and even teleport through the residue of ghostly entities, he/she is severely limited in freedom. Above all, the challenge of the game is lacking. Throughout my gameplay, I had not died once from the demons nor did I find myself stumped or fairly challenged when piecing together clues. Not to mention, there are apparently no consequences for failure and there is not really a valid rating system to make you want to run through the game and try to complete it in a better manner. To sum it up, the game has good concepts which held my interest and kept me playing. However, with the tightly-controlled story and environment coupled with all-too-simplistic “riddles,” I enjoyed myself less than expected.

While I did not enjoy Murdered: Soul Suspect too much, others may very well get a lot of joy out of it. I highly advise you watch Avxry's gameplay below to make your own judgments both gameplay-wise and graphically.: