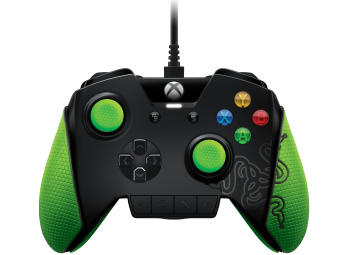 Razer have made a huge announcement showing off their latest gaming goodie, the Razer Wildcat. The Razer Wildcat controller is a tournament grade Xbox One controller designed specifically for eSports, whether you're an eSports gamer or enthusiast this controller will surely grab your attention.

The Wildcat boasts a handful of great features that will make every users gaming experience somewhat unique to their playstyle. The standard triggers feature adjustable trigger stops along with detachable multi-function triggers on the back of the controller, these are like the paddles found on other premium controllers offered by companies such as Scuf. Located in between the stock bumpers you will find two fully customisable multi-function bumpers. The multi-function triggers and bumpers are remappable using Quick Control Panel. Located at the bottom of the controller you will see a Quick Control Panel which is used for assigning and creating custom profiles as well as audio controls for the headset attached via the 3.5mm jack.

As a nice little bonus there is a 3m braided USB cable which features a breakaway cable and is fully removable. Two more optional extras included in the box are rubber palm grips and analog stick grip caps.

With a mixture of plastic, aircraft-grade aluminium, and high carbon steel the controller is said to be 25% lighter than other tournament controllers on the market today. Min-Liang Tan, CEO and co-founder of Razer had this to say about the controller, “The Razer Wildcat for Xbox One is the third generation Razer Xbox controller and the result of years working with eSports athletes on many prototypes. The lightest tournament-grade controller in its class with additional remappable buttons gives gamers an incredible edge.”

To any eSports players out there, does this controller interest you? Let me know in the comments sections below.
About author