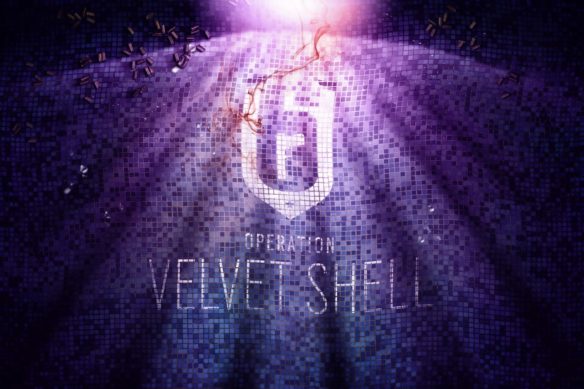 A day prior to its release, the big Velvet Shell update for Rainbow Six Siege has gotten patch notes. Velvet Shell's primary new features are its two Operators and new map. The map, Coastline, is free for all players and features the new "Two-Layer Destruction" system, which Ubisoft says will be present in all future maps. The new characters include an Attacker (Jackal, who can see enemy footprints) and a Defender (Mira, who can install a bulletproof, one-way window in walls).

Also in Velvet Shell are Siege's revamped menus, as well as new customization items. There are four Signature weapon skins (pictured above): Chupinazo, El Dorado, Leon Furioso, and Crossfader, which are described as "sleek, vibrant designs inspired by the colors of the Spanish shores." (Spain is the location of the map and the country Mira and Jackal hail from.) New Elite sets include one for Rook; these consist of a matching uniform and headgear, Operator card, Operator title, charm, and a signature victory animation.

One potentially important balance change involves weapon sights. Previously, the same sight did not always look the same from weapon to weapon. Ubisoft explains this is because "sights' positions in first-person camera (which defines the space they take on screen) were inherited from their third-person camera position, i.e. the real position that the sights had on the weapon rails."

​
This was done for the sake of realism, but it didn't necessarily translate to a great experience in-game. "Our intention is that each sight should be comfortable, different but equally viable, and that when you select a sight you have a precise idea of what it will look like whatever the weapon is," it explains. With that in mind, it's altered sights so that they appear identical no matter the weapon you use. You can see the old style (with a red-dot sight on a CAMRS and PARA-308) above, and the new, uniform look for all sights below.

​
Finally, Velvet Shell introduces a variety of bug fixes. You can check those out below or see the full patch notes on the official website. The update arrives on all platforms tomorrow, February 7 at the following times: