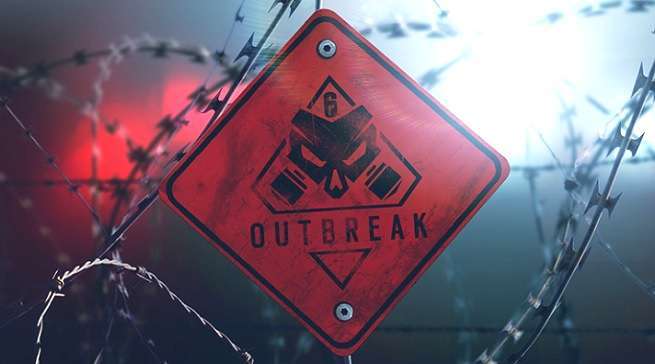 Rainbow Six Siege has changed significantly in the two-and-a-bit years since launch. The Operator number and map count have nearly doubled, strategies have evolved, and we no longer all sit in one room, terrified, waiting to be picked off by attackers. But we are essentially still shooting similar guns at similar enemies, just in different combinations. Operation Chimera's Outbreak event, however, is the first PvE update Siege has received since launch, and it is markedly different to anything the game has seen before.

Starting March 6, it's a one-month co-op event that sees you and two companions team up to fight an alien invasion in the Mexican town of Truth or Consequences. Three missions are included--colloquially known as Junkyard, Hospital, and Resort--and you can pick from new Operators Lion and Finka as well as veterans Smoke, Ash, Doc, Glaz, Kapkan, Tachanka, Buck, Ying, and Recruit.

Outbreak feels distinct from traditional Siege game play, eschewing the usual attack/defend dynamic in favor of more exploring scenarios. In Hospital, for example, you must escort Doctor Macintosh around the veterans' wing of her hospital while simultaneously collecting samples, defending jammed doors, and escaping the building alive. Junkyard and Resort, on the other hand, see you safeguarding explosives as you attempt to destroy the visible signs--columns of miscellaneous alien matter--of the zombies' infestation.

This is as close to traditional Siege as Outbreak gets: you still barricade doors and reinforce walls--albeit with much faster animations to account for the increased number of enemies--and can lay Kapkan traps and claymores. It's here that Outbreak feels much like earlier Call of Duty games' Nazi Zombies maps. However these periods are brief: you usually only need to defend that position for a minute or two before moving on to the next objective.

During these movement phases, Outbreak feels a little more like Left 4 Dead. You're often outside in open-ended environments, frantically keeping an eye out for enemies if they haven't yet spotted you and unloading bullets if they have. You refill ammo, gadgets, and health before moving on to the next area, with Thermite providing instructions over comms and your three chosen Operators offering quips in response.

Attempting to undo all your hard work are five types of enemy. There's the standard humanoid Grunt, who gets stronger when alerted to your presence. Breachers are hunched over with yellow pustules growing on their backs that explode when shot, hurting both you and nearby enemies, if positioned too close. Next are Rooters, who travel underground and burst onto terra firma to pin you to the floor. The Apex, meanwhile, is a more powerful opponent who hangs back, spitting smoke at you to blur your vision and summoning other enemies in the meantime. Rounding off the group is the Smasher, a gorilla-like figure who charges at you and can throw you meters across the map--get him to crash into a wall, however, and you can stab his exposed back to inflict heavy damage.

All this is wildly different to any other Rainbow Six Siege game mode. It's a far more colorful affair than PvP, with the zombified aliens wearing reds, yellows, and greens rarely seen in the base game's more drab color chart. The intensity curve also feels far flatter in Outbreak, with constant streams of alien enemies pouring towards you and constant barrage of bullets streaming out from you in response, rather than the long periods of inactivity followed by spikes of acute action we're used to. Finally, the PvE mode re-purposes existing Operators to make them feel fresh again. Characters who rarely get picked become useful once more, so Outbreak serves as a welcome but rare chance to play as those you wouldn't dare pick in Ranked play. Tachanka's LMG takes care of swathes of zombies with ease, and no human enemy waiting to pick off downed allies means you actually have chance to use Doc's med gun, for example.

With varied enemy types and three extensive missions and maps, a lot of work has clearly gone into Outbreak, which makes its short life span a seemingly odd choice on Ubisoft's part. Once April 3 rolls around, the developer says you'll no longer be able to play its new mode. However, while I enjoyed the different flavor Outbreak brings to Siege, I can understand why it's not billed to be a permanent fixture. Despite only playing for around three hours, I was already sensing a slight lack of depth. Once you've finished one of the three missions, there's not a lot to do save for replaying it on the more difficult Pandemic setting, which makes enemies stronger and more plentiful. And once you've completed all three levels on that? You'd probably jump back into PvP.

Nevertheless, Outbreak represents a welcome change of pace for Rainbow Six Siege. I'm not sure it will hold my attention forever, but as a timed event, it's not exactly designed to do so. Until that point, I'll enjoy the sensation of popping a zombie head off rather than a human one, and of playing Tachanka. It always warms my heart to hear the Lord's LMG is mounted and loaded.