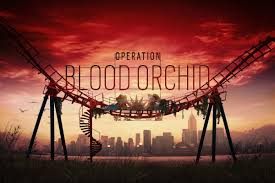 Rainbow Six Siege's largest update yet, Operation Blood Orchid, drops tomorrow. From new Operators to improvements in the game's lighting system, this update may not change the way the game is played, but it is a massive overhaul to how the title appears.

We got a good look at Blood Orchid last week with the release of the update's full patch notes. Today's trailer gives us yet another look at the update's new characters, Special Duties Unit Operators Ying and Lesion, as well as the new Theme Park map, and the new candela device and gu mines. This update also includes Poland Special Forces GROM operator Ela Bosak from the previously canceled Poland expansion; she is not shown in the trailer.

This massive update will close out Operation Health and other major improvements to the game at this time. Thankfully, even with as much as this update is fixing, it only uses up a relatively small amount of storage. The larger end is on PC with Ultra HD at 42 GB; without Ultra HD, it goes down to 26 GB. PS4 and Xbox One will only have 15 GB updates.

Operation Blood Orchid's map and updates are available to all, but the three new characters, Ying, Ela, and Lesion, will be exclusive to season pass holders for one week. After that week, the three can be obtained with renown or R6 credits.