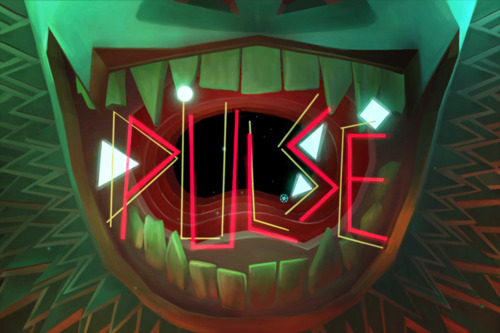 ​
As someone that doesn't normally stroll from the normal path of shooter games and RPG's that endlessly fill out my steam library, jumping into something like Pulse is quite a shift to take. With Pulse, the entire game is based from the perspective of a young girl called Eva who lost her sight but has developed special ability to see the world around her using sound. She uses this unique ability to view the collapsing world around her.

When I was first loading the game up, I was worried about how the mechanics of only being able to see where sounds are coming from would get rather gimmicky and that the system put in place would get old quickly due to it being used so much thought the game. Thankfully, the way that the audio vision works keeps it so that there is no point where you can't see what you are doing. At all times, something is going to be making a noise and if there is a lack of noise in an area that you're interested in you can obtain a cute little forest sprite to hurl across the map to see what might lurk ahead. If you're only interested in things that are up close and personal then you need not worry. Even your footsteps and your jumps can help with seeing, so being able to view the world as a whole is brilliant due to the amazing visuals the game has.

With the visuals of the game, I had them set to the medium settings for PC (due to high locking the game to 30FPS, however, it is technically still playable) and they were still high enough quality to keep me looking at some of the smaller things in the world. Due to the areas that you need to complete puzzles in, for the most part, being rather open areas with lots of things to walk around and look at you can really soak in the style that the game has taken on. With the different pulses of color that you get as the audio opens up your vision more is something to behold.
You can see the hardware I was using here.

The visuals & mechanics of the game are, thankfully, not the only thing that was holding my interest in the game. The story behind the world's destruction is something that can keep you thinking for hours as you head through the different sections of the game with new questions popping up as you head further and further into the game, with the entire tale being told from a rather creepy chronicler. From time to time as you trudge through the different areas of the game, a nightmarish, low polygon bird adds more parts to the puzzle of what you're doing in this crumbling world and where you are heading.

With that said, there were a few points where the game does fall just a little bit short. There were a few platforming sections and trying to see where to jump when the screen is rather dim isn't the easiest of things. Another minor issue I had, was trying to get to some of the places that I needed to get to, with there not always being a definitive way to head. Sometimes I'd be walking around worried if I was heading in the correct direction, however that may just be me being a fool.

Overall I'd say that it's a game worth checking out. With the visual style of the game, an open story to give you plenty to speculate about as you do progress more and more into the story & interesting puzzles and mechanics, it's a game that I'll be certainly keeping in my steam library.